This month, Artshub and Screenhub's picks range from silly to serious, with the critic's pick for Best Foreign Film at the Oscar's, Bangarra's Firestarter on the big screen, and some nostalgic laughs to round it out.
Jini Maxwell 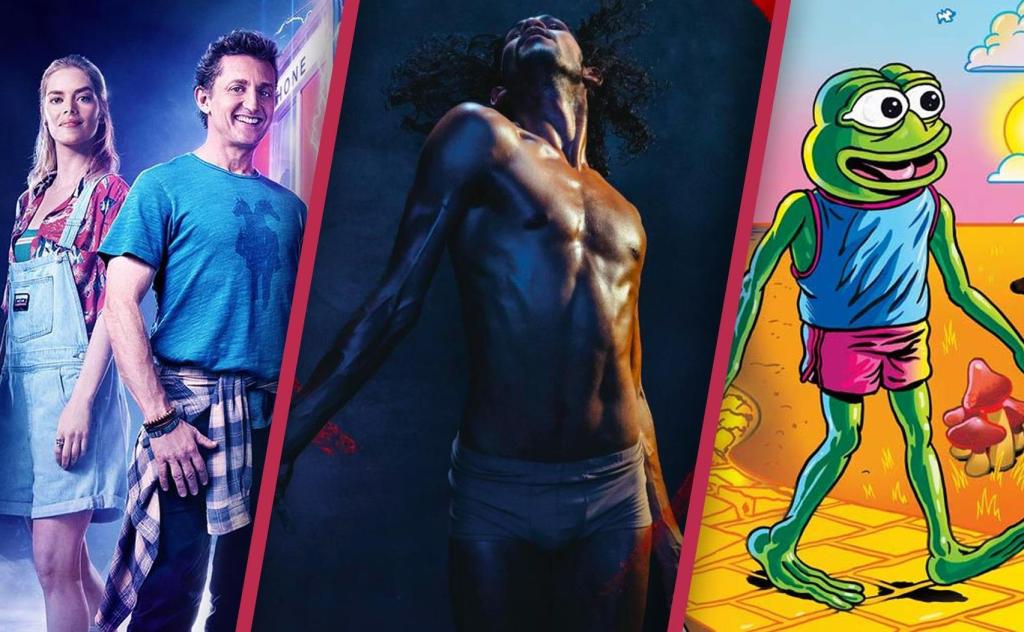 This month, the office are welcoming in the return of cooler weather with the best of Australian and international screen media. From the bowels of the internet to the story of the world’s oldest continuing culture on stage, Artshub and Screenhub delved into some fascinating non-fiction this month, as the weather cools. But it’s not all serious: we revisited big laughs with the return of Bill and Ted, and a meditative town-building game to suggest something for anyone, whether they’re hoping to look inward, outward, or just have a belly laugh.

FIRESTARTER: THE STORY OF BANGARRA, ICON

‘This is a must-see experience for everyone in Australia. Firestarter: The Story of Bangarra highlights a unique and turbulent time in Australian history, revealing a country that is slowly maturing, and yet still so stagnant. From the open lines, when David Page started talking about maintaining the land, I realised I should’ve brought a box of Kleenex! The water works started, and didn’t stop the whole film.

READ: Firestarter: The Story of Bangarra is vivid and important

‘I think this film will touch anyone, regardless of their interest in dance, although the dance aspects are pretty stunning. It’s a unique insight into Australia’s modern and ancient history, wrapped in the struggle of three beautiful and gifted men, who are struggling to find identity and place in a conflicted world. The access to archival footage of their journey is just incredible. I bawled the whole movie –⁠ but it was truly exquisite.’ | Danni Petkovic, National Sales Director, ArtsHub

‘I watched Quo Vadis, Aida which is a devastating film about the Srebrenica genocide. Although the subject matter is distressing, even I (a crybaby) was able to watch the film and it’s really worth a watch –⁠ I hear it’s touted to win Best Foreign Film at the Oscars this year! It’s not a violent film, but rather ratchets up the tension scene by scene as you watch the characters stuck in Greek-style tragedy where nothing is in doubt, everyone’s destiny is known and all you can do is watch the spring get wound tighter and tighter. This is a truly impressive film, well researched and expertly executed.

‘And yes, I cried like a baby at the end. The end is incredible.’  | Alana Morris, Business Development and Account Manager, ArtsHub

Palace Films will announce release details in the next few weeks.

It seems I am pretty late to Call My Agent, a French show on Netflix which has now run to four series and 24 episodes. I keep mentioning it to new people, who often admit to gutzing each batch as they came out. It tells the story of a Paris talent agency whose Machiavellian partners lie just for practice, flatter their clients mercilessly, and treat everyone as pawns in a bloodless but intricate Game of Casts.

It is a soapie whose characters are Olympian standard deceivers, where we quickly come to admire their ingenuity, sense of irony and brazen lust for stealing each other’s clients. Guest stars are a roll call of fabulous performers from Cecile de France to Juliette Binoche, Isabelle Huppert and Sigourney Weaver. The men are a galaxy of older French dudes like Guy Marchand and Jean Reno, mostly playing themselves with delicious glee. I bet their agents schemed to get them a gig.

The project is created and written by Fanny Herrero, based on the memoir of classy agent Dominique Besnehard, so there is a sense of truth beneath the financial risks and struggle to survive. | David Tiley, Film Content Lead, Screenhub

I finally got around to seeing Bill and Ted Face the Music after missing it in cinemas during Melbourne’s lockdown, despite how badly we all needed a goofy laugh! Now on Netflix, the titular Bill (Alex Winter) and Ted (Keanu Reeves) return except late in life and having not set the world on fire as was prophesied.

Outside of the phonebox, Winter has gone on to direct several documentaries (including Showbiz Kids an excellent look at the long-term impacts on his fellow child stars of early success) and Reeves has been one of the nicest guys in Hollywood for decades. Neither of them needed this sequel, but here we get two old friends happy to poke fun at themselves and make callbacks to old jokes. But they also know when to step out of the way – the real stars are their daughters Billie (Brigette Lundy-Paine) and Thea (Samara Weaving, a longtime Home and Away actor) who take the journey their fathers should have gone on to find the band across time that will save the universe from a time glitch.

It’s a daft plot that supports all the silliness you’d expect from this third film with Hendrix and Louis Armstrong thrown together with Mozart and Death itself. But as the pandemic seems in retreat and we return to the real world, don’t we all need a reminder to be excellent to each other? | George Dunford, Content Director, ArtsHub + Screenhub

‘I’m currently in one of those stages of my life where I can barely find a spare couple of hours to watch something all the way through or make a significant dent in a book. In the time that I do have, I’ve been filling it with video games that can be satisfying in short bursts.

‘The latest is Dorfromantik, a very peaceful building strategy game developed by a group of folks in Berlin, expanded from a prototype they made for the annual global game jam, Ludum Dare.

‘It’s a game where you, quite simply, place a given hex tile on a board to slowly expand your personal little countryside. You’ll be dealt tiles with towns, fields, rivers, forests, and it’s all just very calming and meditative to watch your own quaint little rural region expand while the most relaxing music plays.

‘There are certain restrictions and challenges above and beyond this mechanic–certain tiles will come with adjacency puzzles, for example, a town tile that asks you to try and place a specific number of other town tiles near it to build a city. Complicating this are tiles that have things like rivers and railroads which can only be connected to one another, and create no-build zones. And the uncertainty of the tiles you’re dealt means that things don’t always go as smoothly as you think they will.

‘It’s a “play it until you can’t” kind of game with a score counter that assesses how well you stepped up to the challenges you were dealt, but none of that affects just how much of a downright soothing experience Dorfromantik is.’ | Edmond Tran, Managing Editor, Screenhub

Every since I watched the documentary Feels Good Man, it’s been stuck in my brain. It tells the story of Matt Furie, the sweet-natured comics artist and author of Boys Club, a chill series featuring the most infamous amphibian on the internet: Pepe the frog. The documentary tracks Pepe’s origins as an innocent cartoon, to its adoption by 4chan, the alt-right, the role of memes in the the 2016 election, and Furie’s response to Pepe’s official categorisation as hate speech.

READ: What’s Up With DocPlay? An interview with Paul Wiegard

Featuring interviews with 4channers, political analysts, journalists, lawyers, and Furie himself over the course of years, it’s a fascinating view into the darkest part of the internet that culminates in Furie’s legal battle with alt-right figures like Richard Spencer and Infowars, in an effort to bring Pepe (or at least, his copyright) home.

I recommend this documentary to anyone who’s interested in (or just terrified by!) the rise of the alt-right, and the role of internet discourse in enabling the rise of fascism. Unlike a lot of documentaries along these lines, it’s protagonist Furie is delightfully wholesome; it’s a relief to receive such a thorough education in darkness through the story who seems to have taken them on, and prevailed with his soul intact. I watched the Edward Snowden documentary Citizenfour and Feels Good Man back to back on Docplay, and I feel more terrified and fascinated by the internet than ever. | Jini Maxwell, Games and Digital Content Lead, Screenhub