In a culture full of clashing politics, this warm inclusive homecoming comedy feels radical, says Mel Campbell.
Mel Campbell
[This is archived content and may not display in the originally intended format.] 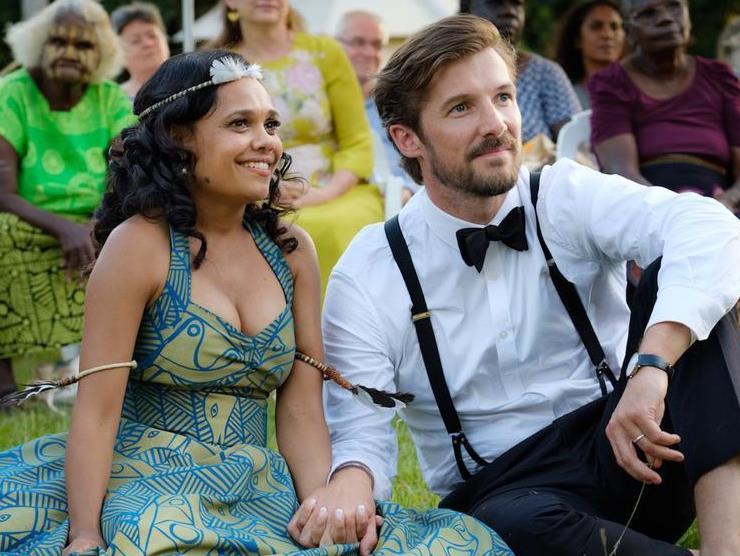 Romantic comedy is a genre that both requires and rejects realism. Its soothing powers depend on a familiar narrative arc filled with contrived moments and motifs that bear little resemblance to real life. Yet paradoxically, the rom-com protagonist must be ‘relatable’: a likeable woman like you, or someone you know, whose actions and decisions always make sense. And the situations in which she finds herself must remain broadly plausible in order to sustain the empathetic fantasy that anyone in a similar situation could find true love.

Top End Wedding, directed by Wayne Blair (The Sapphires) from a script by Miranda Tapsell and Joshua Tyler, leans heavily on rom-com clichés, especially in its first half. Some early reviews have argued this reveals weak scripting. But while the effect of all these cumulative clichés is undeniably shabby and unoriginal, it’s also comforting – like that favourite ancient, threadbare T-shirt you can’t bear to chuck out.

The clichés are used purely as scene-setting shorthand, after which point the film relaxes into its true form: not a Hollywood rom-com at all, but rather a warm-hearted story about family and home. The gorgeous landscapes of the Northern Territory and Tiwi Islands, captured sparklingly by cinematographer Eric Murray Lui, are a metaphor for the inner worlds of Lauren (Miranda Tapsell) and her mother Daffy (Ursula Yovich). And their intertwined journeys home are emotional journeys, too – the film begins with Daffy as a teen bride fleeing her Tiwi wedding, and is brought full circle by Lauren’s Tiwi wedding to Ned (Gwilym Lee from Bohemian Rhapsody).

Lauren’s an Adelaide lawyer heading into a make-or-break client meeting, so of course she clumsily smears her jacket with pastry sugar and snaps her stiletto heel. Meanwhile, Ned’s a UK expat and scruffy Crown prosecutor in odd socks. He quits his job impulsively in the middle of trying an incontinent shoplifter, because his heart isn’t in punishing petty crime.

Exhilarated that she’s impressed the clients – and snagged a promotion from her sardonic, workaholic boss Hampton (Kerry Fox) – Lauren arrives home with champagne… to Ned’s proposal. But how will they get married when Hampton’s regularly working Lauren til 4am and seems to employ nobody else? Luckily, “Cruella” gives her protégée ten miserable days off – so Lauren seizes an opportunity. The wedding has to happen now. In Lauren’s hometown of Darwin. Even though Ned’s never met her family.

But when they fly in, Lauren’s dad Trevor (Huw Higginson) is a bearish, pyjama-clad shambles. Daffy’s run out on their marriage, leaving him to sob in the pantry to ’70s soft-rock ballad ‘If You Leave Me Now’ – a running gag so silly I never failed to find it funny. So as Lauren’s bawdy bridesmaid trio (Shari Sebbens, Elaine Crombie and Dalara Williams) sass their way through wedding prep, Ned whisks Lauren away to track down her mum.

So far, so rom-com. But the romance genre elements in this film really act as placeholders, and Ned’s a placeholder character: not so much a romantic hero as an amiable blur. It’s actually quite refreshing to see a film so strikingly uninterested in its central couple as the primary focus of each other’s emotional needs. Tapsell is a natural star; she has a luminous, soulful charisma that makes it obvious why any man would fall for Lauren. She never really seems to desire or need Ned to validate her – as traditional rom-com heroines do.

Nor are Ned’s personality and inner life particularly important here. He’s the capable, practical, patient mechanism for Lauren to find herself. What’s truly sexy about him is that Lauren seldom has to manage his feelings or worry that he’ll humiliate her. (He’s also resourceful enough to find a 10kg bag of potpourri to pour out in an elaborate romantic treasure-hunt trail for his fiancée.) Their only moment that rang false for me was a bus-stop fight that seemed to come from nowhere and felt shoehorned in – as did the inevitable airport reconciliation.

While many wedding rom-coms find humour in the different worlds of the bride and groom, Top End Wedding isn’t interested in the sort of culture-clash comedy seen in A Few Best Men and its lesser sequel. While Tapsell and Tyler’s script does indulge in obvious, corny gags and unconvincing leaps of logic straight from the hoariest rom-com playbook, it’s also important to note the clichés in which this film doesn’t indulge. Racism. Sexism. Class snobbery.

While Ned’s mother (Tracey Mann) briefly sniffs at a “tribal” wedding, the gags aren’t at Ned’s lily-white Englishness, or his fussy fondness for his little dog Cher (an absolute scene-stealer!), but at foibles that cut across cultural lines and emphasise what people share. Top End Wedding is at ease with a spectrum of genders and sexualities, and never scolds its characters for their actions or relegates them to caricatures, but grants them earnest moments of tenderness and connection. There are also lots of specific Aboriginal family and community references that had the mob in my premiere audience screaming with laughter.

In an Australian culture filled with cynical and combative politics, Top End Wedding feels radical – not because it seeks to break new ground, but because it finds joy in a shared homecoming.

Screening note: Top End Wedding releases Australia-wide on 2 May, but it premiered at a special pop up event in Adelaide last weekend, and has already screened in previews in Sydney and Melbourne.