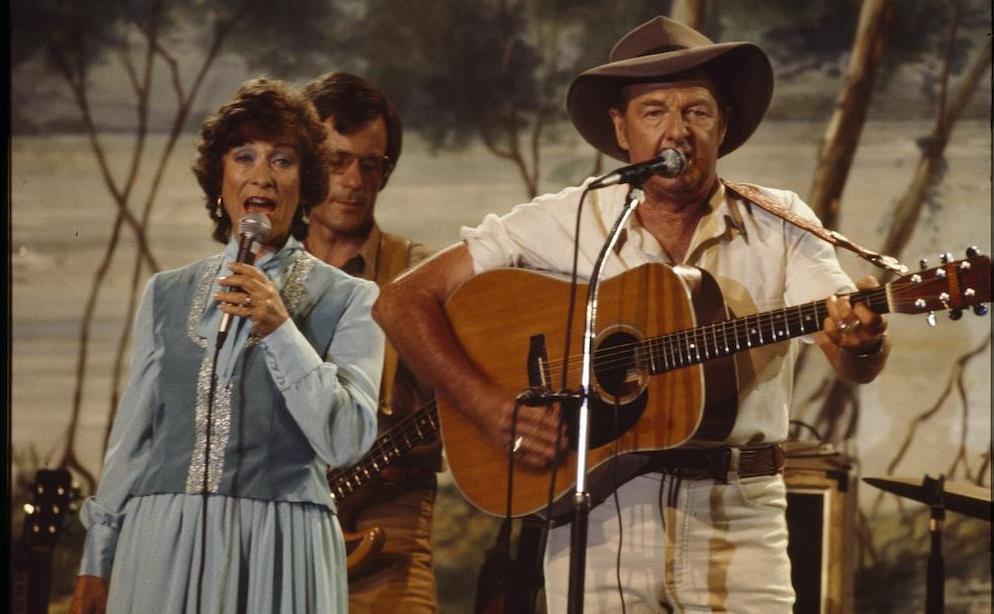 It would be easy to say Joy McKean was the woman behind Slim Dusty. But as this documentary makes clear, she didn’t stand behind anyone. Married to Slim for fifty years, she was a successful singer alongside her sister Heather well before they met. After they wed she became his tour manager as well as co-performer, and wrote many of his hits (including the 70s smash ‘The Lights On The Hill’). The only reason she’s not better known is because she was standing next to Slim Dusty. Still going strong at 90, Slim & I gives her a chance to take her rightful place at the front of the stage.

Director Kriv Stenders (Red Dog) has a bigger job here than simply recounting the extremely full life of one of Australia’s country music stars. Country music itself is still going strong, but Slim Dusty’s blokey version is fading in the rear view mirror (Slim himself passed away in 2003). The challenge here is to lay out the case for why this brand of country still matters; The Best of Slim Dusty may have spent a thousand weeks in the ARIA top 100, but chances are it’s been a while since you heard ‘A Pub With No Beer’.

There are three strands to this film’s argument. One is Joy herself, who’s as sprightly and engaging an interview subject as you could hope for in a 90 year-old. (Heather, who’s still going strong, isn’t bad either). She’s sharp on her childhood (where polio left her with only one working leg) and the details of her career pre-Slim as one half of the yodelling duo The McKean Sisters. While their courtship is kept tastefully vague, she’s not afraid to cover some of the rough times later on.

Slim’s one brief attempt at keeping her at home while he fooled around was stamped out fast, while the decision to put their two children into boarding school still brings up tears. As the first woman to present a show on Australian radio and the first woman to win a Golden Guitar, Joy’s successes speak for themselves and she’s a compelling character in her own right, but

highlighting a woman’s role in the creation of modern country definitely goes some way towards making this documentary feel even more relevant.

While both Joy’s children are interviewed (boarding school was definitely a mixed experience), the second strand mostly focuses on other musicians. Despite only having a relatively brief time frame to speak to people – Stenders conducted most of the interviews over two weeks – there’s an impressively wide range of Joys’ peers present. Some are her contemporaries (Chad Morgan is looking well for someone in his late 80s) but current performers such as Paul Kelly, Missy Higgins, Kasey and Bill Chambers, and Troy Cassar-Daley also sing Joys’ praises (and her songs) while making it clear her song-writing and organisational skills were major factors in Slim’s wider success.

Joy’s songs are known for being deceptively simple, often taking unexpected turns musically while being emotionally straightforward lyrically. There’s a bit of backstory here too: ‘Lights on the Hill’ was based on Joy’s experiences towing a caravan late at night, while coded elements of Slim’s life made it into other tracks. Music buffs will get a lot out of scenes where performers deconstruct some of her songs; their respect for her songwriting skills is clearly no act.

The third strand is Slim himself. Working with editor Karryn De Cinque, Stenders takes full advantage of extensive archival footage (after all, Slim Dusty was a massively successful entertainer for half a century), along with never before seen home movies and scenes from the 1984 biopic The Slim Dusty Movie to illustrate the pair’s lengthy history. Some elements are of historical interest, like the insights into now largely lost world of regional entertainment, while the sheer scope of their touring commitments (they were on the road ten months a year for years on end) remains an impressive achievement.

By the 60s their east coast audiences began to dwindle (as Joy puts it, when television arrived ‘dry cleaners were closing down because people weren’t going out’) so they expanded their tours out west and up north. The result was a deep bond with many of the smaller Aboriginal communities, who embraced Slim and Joy as one of their own – and give this documentary another argument for the continued relevance of Dusty and McKean’s music.

Joy comes across as a fiercely determined and extremely talented woman who kept the Slim Dusty machine firmly on track. Ironically, Dusty himself gets the more rounded portrait here, as a man unable to settle down and haunted by leaving his mother on the family farm after the death of his father. This fast moving, insightful and always entertaining film is firmly a tribute to Joy, and rightly so: if Slim Dusty was ‘the man who is Australia’, she was the woman who made the man.