Film Review: Rams rides home on the sheep’s back 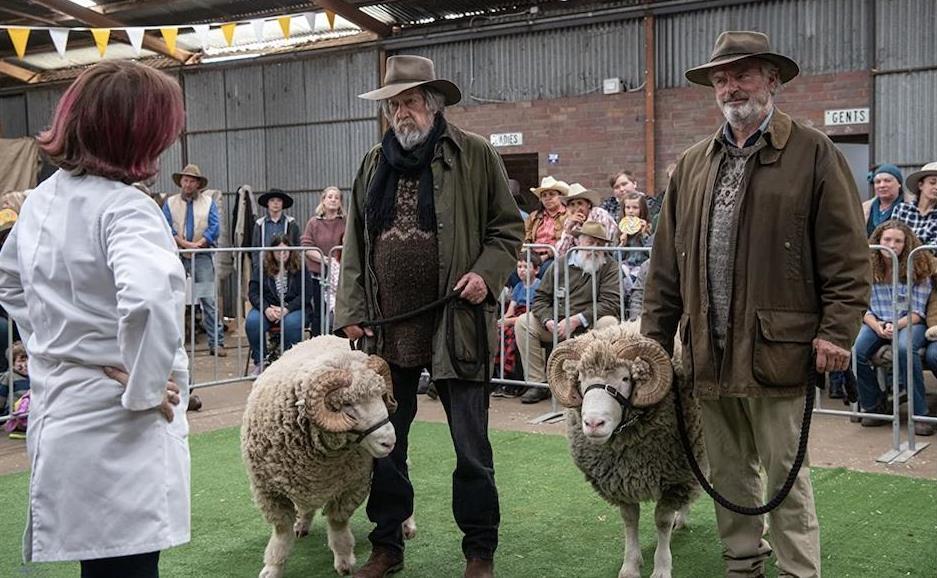 It’s unfair to expect any film to be the one that brings audiences back to cinemas in 2020. But even without coronavirus, big expectations aren’t new for Australian films. For years, any local film with even the slightest profile or decent publicity angle has been talked about as the one that could bring Australians back to cinemas to support the local industry. So while Rams – the second new Australian film with name brand actors to be released into cinemas since coronavirus hit (after Never Too Late) – has the weight of expectations on it, those expectations were always going to be there.

So can Australian cinema ride to success on the sheep’s back?

Colin (Sam Neill) treats his rare breed of highly prized sheep like family. That’s perhaps not surprising, as his actual family – which consists entirely of older brother Les (Michael Caton), who lives next door in West Australia’s lush Mount Barker region – is a sullen, bitter, friendless drunk. The brothers (who share a sheepdog) haven’t spoken in thirty years, which seems to suit them and everyone else just fine.

Then disaster strikes: Colin suspects Les’ latest prize-winner is suffering from a rare deadly disease and tips off the local vet (Miranda Richardson). Rapidly, the government swings into action, ordering the entire region’s flocks destroyed. If there’s going to be any hope of saving their family legacy, the brothers are going to have to find a way to work together.

This remake of Grímur Hákonarson’s Icelandic film Hrutar is directed by Jeremy Sims (Last Cab to Darwin, Beneath Hill 60), with a script by Jules Duncan. It has two main strengths. The first is the cast, led by a typically assured performance from Neill. This kind of decent, down-to-earth character has been his mainstay in recent years, but there’s more to Colin’s affable honesty than meets the eye and Neill does an excellent job of bringing out the slow boiling desperation underneath.

Caton has the smaller role and a slightly tougher job, having to hint at a decent human being underneath a rough and nasty shell. He’s more than up to the task, while a strong supporting cast (including Asher Keddie, Wayne Blair and Hayley McElhinney) could have been given more to do, but are vital in creating the community backdrop this film relies on.

The second big plus here is the script, which in something of a rarity for Australian film delivers one twist and then keeps going, swinging (not always completely successfully) between comedy and drama as the story shifts and turns. The various developments aren’t entirely seamless – one particularly abrupt transition feels like they were given feedback to take things in a direction they weren’t originally planning to – but the well-drawn characters keep the numerous developments within the bounds of possibility.

The Icelandic original was built around a chilly isolation this version can’t hope to replicate, but cinematographer Steve Arnold vividly brings to life the shifting nature of the West Australian location, ranging from lush rolling hills to dry summer dust as the threat of bushfires looms. The link to the land here isn’t as strong as in the original (where it felt like the brothers stayed on their farms because there was literally nowhere else to go), but there’s more than enough history on display to explain the brother’s stubborn refusal to let go.

Despite the publicity push, Rams isn’t exactly a feel-good comedy about Australian farmers. It is possible its variable nature will put off some viewers, even as others will enjoy the way it never quite settles down. It’s a rare pleasure in Australian film to still be unsure where things are going into the third act, but it’s the strong leading performances that bring it all home. Unless you’re a fan of animal husbandry jokes, in which case Rams is a sure-fire smash.