Mukbang, a short film which won the director's prize at the Sydney Film Festival, has produced a pungent debate about racism and cultural appropriation.
David Tiley 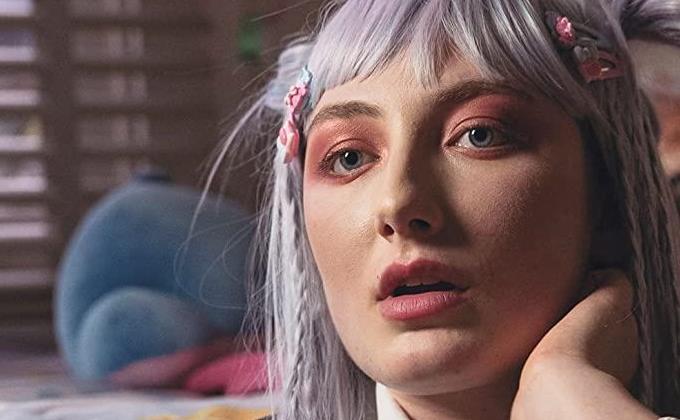 Mukbang is a film in which a young woman confronts identity issues with the ‘help’ of the internet. Image: from key art.

Just a few days ago, that sliver of the press which actually cares about Australian short films was happily reporting that Mukbang had won the best director prize at the Sydney Film Festival. The judges were Sophie Hyde, Bryan Brown and George Miller. The artistic director of the whole festival is Nashen Moodley, who grew up in South Africa, has strong connections with Third World cinema and is a person of colour.

At the time, I said this:

The Rouben Mamoulian Award for Best Director went to Eliza Scanlen, already an actor with a rising career, through Home and Away to Australian feature Babyteeth, Sharp Objects for HBO and Greta Gerwig’s version of Little Women. There are lovely precise performances in Mukbang which help a lot to find what the judges call a unique perspective and a fresh voice.

The film had a fair amount of publicity because it has a catchy theme and Eliza Scanlen is a public name and pushing forward in Hollywood. She left Sydney just after graduating from high school and spent the next three years playing junior psychopaths and then the sick but determined sister in Little Women. According to The Independent:

Both Sharp Objects and Little Women were written and directed by women and led by a female cast. Scanlen knows how unusual that still is, but she feels she’s entered the industry at “an incredibly fortunate time. I haven’t had to face the hardships that so many women have had to face,” she says. “It’s important for us young women to honour how much some women have had to fight to be a part of an industry in which they should inherently belong.”

The gang around the film is well aware of issues around sexual politics; they belong to a younger generation whose attitudes to gender and race are far more relaxed than their predecessors.

‘Mukbang, as we see in the film, is a digital pseudo-fetish which involves people eating copious amounts of food and broadcasting it online.

The intimate peculiarities of this online phenomenon offered an opportunity for Scanlen to explore a more personal experience. “The film was about my own relationship with social media”, says Scanlen. “It was my way of coming to terms with its positive and negative aspects.” Zwecker’s character observes the sexual budding of her classmates in more obvious ways `– pornography, slut-shaming – and begins to come to terms with her own sexuality by slipping into a vivacious, Technicolour persona that she’s observed online.’

To give you an idea of how racist and broken the screen industry is in Australia, here is an extremely current example. (TW: Contains violent imagery against Black people.)

I have seen it. Beyond being profoundly problematic in the way it appropriates Korean culture in order for a White girl to find herself (it is the equivalent of EAT PRAY LOVE for teenagers), it contains the following scene. Again: content warning.

Michelle Law is a writer and activist, a comedy scriptwriter, playwright and performer, whose family originated in Hong Kong and Malaysia. She is deeply respected.

Among the people who support her is Corrie Chen, who was born in Taiwan, and is also a deeply respected documentary and drama director who added:

Say no to all white panels of any kind. If you don’t, you can fuck off with your well meaning I’ll do better I didn’t realise blah blah. We see you and we’re coming for you. Film is about more than “merit” or “craft” or whatever bullshit excuse. It about making fucking CULTURE.

Thjs film was made in September last year and has been streaming on the SFF website for ten days since June 10th but it was only until now – until it was pointed out by the BIPOC community, who are tired of having to constantly have to – that I realised how deeply hurtful it is.

On behalf of Fat Salmon Productions, and all those involved in the making of this film, I am so deeply sorry for creating a work that has caused offence. I intended this film to be a young girl’s journey of self-discovery in the age of internet culture, and I failed to recognise how problematic this was. I take full responsibility for this.’

She also asked the festival to remove the shot of the drawing, which the festival did, which caused more commentary. Here’s Michelle Law:

Beyond the racism and violence within the film, editing a film AFTER IT HAS WON is rigging the system. It’s dishonest and unfair to the other films in consideration.

Garry Maddox in The Sydney Morning Herald took the story mainstream, reporting Pearl Tan, lecturer in directing at AFTRS, who said this on Facebook.

She was “deeply disappointed” with the festival and the judges for it being selected and winning “without anyone questioning the lack of cultural competency”.

“Once the issue was flagged the film festival swiftly conspired with the filmmakers to re-edit the film and slide that new edit quietly into the streaming platform,” she wrote on Facebook.

“This incredible hustle would’ve been a tremendous amount of work for the filmmakers and the staff within Sydney Film Festival to pull off … and all to sweep under the rug their racism.”

The story of Mukbang and its reception is a very limited example. Ironically it deals in part with social media, and it’s become the subject of a social media debate in a way that the filmmakers did not expect. No-one should doubt the sincerity of the main protagonists from any point of view here. It conflates the issue of the way we mock Korean culture, and teen internet activity, and the depiction of a young black man, who could have been of any colour and culture without making a difference to the story.

But that is the real world; most arguments are not neatly boxed in one category. It does remind us those of us in the White lefty bubble, or the gay lefty bubble, or the older person’s lefty bubble or the emerging filmmaker’s bubble, that we can tick these issues off in our mental nice-person’s list without understanding the fury behind the fight. Right or wrong around a particular moment, the overall message is clear. Identity matters. Identity is core self.

Let’s not forget that the St Kilda winner this year is The Egg, made by a director of Korean heritage. The winner at Sydney is The Idol, made in Mandarin by a team from that culture. Both of those films would feel pretty different if they were made outside their cultures.

The detail and passion of these issues is contained in one article in The Guardian, published just before this happened on June 17. Michelle Law and Corrie Chen are both in this article, while Natesha Somasundaram says:

‘I want my screen industry to disrupt, agitate, entertain, educate – and be brave enough to completely restructure their practices for a rapidly restructuring world. I’m speaking out against this industry’s obsession with the optics of skin colour, rather than taking the time to understand the complex, nuanced ways in which race can inform an individual’s lived experience. I want this industry to stop thinking in mindless, condescending, aesthetically-pleasing “diversity initiatives”, and start thinking critically about how to engage with black and brown creatives like actual human beings.’

We have a long way to go. I think we should honour the people who speak out, and honour those who apologise ultimately on behalf of all of us. I’ve got no right to float above this with lofty sentiments. I saw the film and didn’t notice.

We have a long way to go. I think we should honour the people who speak out, and honour those who apologise ultimately on behalf of all of us. I’ve got no right to float above this with lofty sentiments. I saw the film and didn’t notice.

There is a specific early moment in the film in which the central character is sitting in a bus listening to a pair of teenage boys behind her talking about pornography. They are noisy but out of focus, and I had a moment where I noticed that one is Black and the other is Asian, and then I was brought back into the narrative of sexual politics, which is hurtful for the main character. On one level it was a piece of colour-blind casting; on another these moments exist beyond their intent.

We, as in a white majority industry, won’t get it until we understand the slow, acid depth of rage that people actually feel as the objectivised subjects of these issues. As we already know from feminism, if the males in our industry have the eyes to see and the heart to feel.

Here is the response which the Sydney Film Festival has sent out:

Over the years, the Festival has presented a programme of films by a rich diversity of filmmakers from all over the world, reflecting and pro-actively supporting diversity and accessibility; specifically, in program streams such as First Nations, Screenability, Europe! Voices of Women in Film, and in pledging to the 5050×2020 charter.

The Festival also tries to bring together a diverse range of experience and voices to its juries, and will continue to improve in this regard.

Sydney Film Festival has a strong conviction that open, respectful dialogue and debate opens the way to systemic change.”