From new forms of media to honouring elders, this year's award list is muted but touched with joy and melancholy.
David Tiley 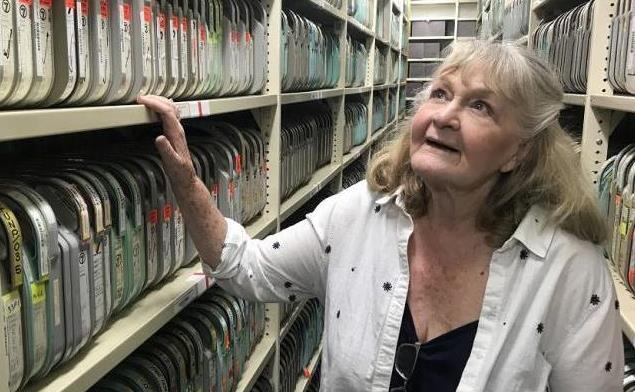 Val Lehman looking at tapes of Prison at the National Film and Sound Archives. Image: NFSA

This year’s Australia Day honours list is dominated by the appointment of Margaret Court for her second gong, as the whole of Australia now knows after a collective gasp of shock, at least radiating from our capital cities. The problem being that she is a Pentecostal pastor who takes the homophobic bits of Leviticus to be gospel truth and leaves out all the other ugly injunctions, as comedians have noticed.

She was nominated by the community, investigated by staff of the G-G’s office and passed to the 19-member Council for the Order of Australia. As the ABC points out, Malcolm Turnbull happily reminds the public that he got his (rather more prestigious) medal for advancing the cause of same-sex marriage in the same batch. While the Council carries representatives from the state governments, and the federal bureaucracy including the Top Military Person, it has has seven members appointed by the Prime Minister. So the ultimate tone of the group can vary hugely.

The anger does not escape our attention because support for LGBTIQ+ people and politics is pretty strong in our sector. Dr Clara Soo returned her 2016 OA and then Kerrie O’Brien refused to accept his.

Read: How the arts fared in this year’s Australia Day HonoursWith all this furore, it is easy to miss the fact that this list has one really poignant story, two remarkable firsts and a pair of television elders who have been loved by millions.

Glenn Wheeler (OAM) was a well known media identity around Sydney as a 2GB radio host, and a member of the Network Morning Show family, fuelled by teasing, jokes, silliness and ironclad optimism. He used his profile as a significant worker for charity, always up to chair a fundraiser with a special emphasis on men’s health and cancer care. In 2015 he was happily zipping around Sydney on his hot-model motor scooter when he was smashed up by a van piloted by a truly frightening driver.

A man who paid attention to the resilience and suffering of other people spent five months in hospital with noticeable brain damage. Surrounded by his family, remembered by fans, he went back to charity work, adding Parkinsons and the Cerebral Palsy Foundation to his crusades. Now he has an OAM, the networks are emotional, and Seven paid tribute to him this morning.

Maureen Anne Kerridge (AM) received her recognition for ‘significant service to the television industry, to the arts, and to charitable organisations.’ That is a cold description – she is better known as Maureen Plavsic, who died last December and was publicly mourned. A senior advertising veteran with a great grasp of numbers, she was the first woman to have run an Australian commercial television network, taking on the role of both CEO and Managing Director at Seven in 2000 and steering it through the Sydney Olympics to immense commercial success. She went on to non-executive directorships, including the National Gallery of Victoria.

For the very first time, a YouTuber has been given an Australian gubernatorial honour. Ex-South Australian Brady Haran (OAM) is an independent filmmaker and video journalist whose journalistic career took on a radical edge after he worked for the BBC and did a project with Nottingham Science City for which he began to upload his raw footage. It was like a gateway drug.

Now he is a true Indy, and has a veritable tribe of YouTube channels, focused on science, maths, brainy things and his chihuahua Audrey.

Aside from this spark of joy, the 2020 Australia Day Honours list is very quiet for the screen sector. There are six new members of the order of Australia (AM), and another two with the medal (OAM) covering four women and four men. The performing arts did much better, with 17 awards.

Michael Hawkins (AM) is a current member of the Screen Australia Board, the Chair of the Asia Pacific Screen Awards, the Executive Director of the National Association of Cinema Operators – Australasia and the Australian International Movie Convention, and also a Director of Creative Content Australia, which is the industry’s anti-piracy organisation. He came from exhibition company Australian Multiplex Cinemas, and is known to Queensland screen people as a former Deputy Chair of Screen Queensland.

Genevieve Mary Jacobs (AM) is a resident of Canberra, is a gardening expert, a journalist of history, design, gardening and fine arts, who was a presenter for ABC Radio and co-ordinator for Australia’s Open Garden scheme. She runs international garden tours which are probably a hoot. She is not really a screen person but she is the only ABC or SBS person left after Kerry O’Brien’s protest.

There is a coincidence in here, because Graham Ross (AM), who hosts Better Homes and Gardens on Seven is also on the list, also does radio gardening shows, and runs Ross Garden Tours with Sandra Ross. But he has been broadcasting across Australia since 1985 and claims his tour operation is ‘the world’s leading specialist garden tour company.’

Hail to the hoofers

Here we find a pair of ridgy-didge cultural icons among the 17 medallists described as performers. Lorrae Desmond (AM) left Mittagong for London as Beryl Hunt, spend her teenage years in wartime Britain and turned up on the BBC at the age of 15 as a singing cigarette girl, had singing shows on the BBC and represented the country in the 1957 Eurovision Song Contest, before turning her hand to television comedy and coming back here with a new name and her own variety show. The rest is our cultural history, which includes the first top Logie for a woman, singing for soldiers in Vietnam, and 11 years on A Country Practice. Winding down, she toured a one-woman theatre show, tried her hand as a lyricist and became an agony aunt.

Here’s a piece of performing history: Lorrae Desmond on the Jack Benny Show in 1964. She comes on at 4.28.

At a mere 77 years old, Valerie Kathleen Lehman (AM), is still performing, most recently in episodes of the Samantha Strauss series The End in 2020. She has been on-screen since Bellbird in 1967, though the highlight for the public was Prisoner, where she ruled the jail as Queen Bee for 379 episodes from 1979 to 1983 until she left allegedly out of boredom at the age of 40.

Last January she auctioned off one of her three Logies to raise money for bushfire relief. Her citations says, ‘For significant service to the performing arts, and to wildlife conservation.’ The Logie fetched $7,400.

By comparison, the 2021 list is much less imaginative. Then again, there hasn’t been much vitality to the whole of 2020, though the year has been one giant story of survival.

While honours are great, they are but baubles in the grander scheme of things, so here is something to cheer you up. YouTuber Brady Haran (now Brady Haran OAM) loves his dog.