Two indie Australian horror films with a difference are among the standout films at this year's Sydney Film Festival.
Stephen A Russell 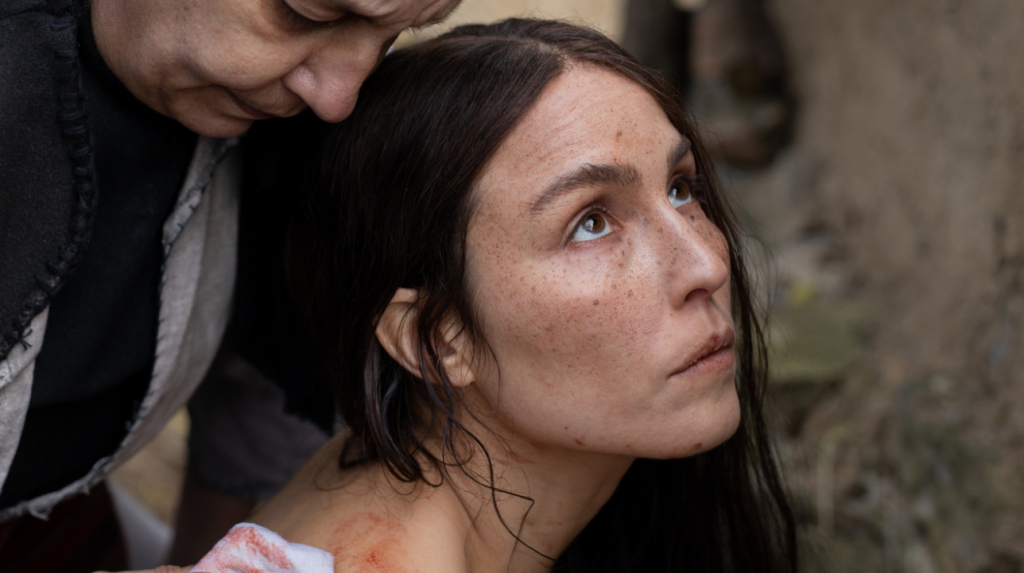 There is powerful dark magic at the heart of Australian-Macedonian filmmaker Goran Stolevski’s spellbinding movie You Won’t Be Alone, which enjoyed its Australian premiere at the current Sydney Film Festival (SFF) after debuting at Sundance. Shot in and around a remote village clustered near the peak of a Serbian mountain, doubling for the land where he was born, Stolevski’s fantastical film depicts the terrible consequences of a deal made not with the devil, but a witch.

The spark that would ignite this dark fairytale came to him in the witching hour. ‘I was going to the London Film Festival, but living in Bristol at the time, which meant a three-hour bus ride in the morning at 6am, and then back at midnight,’ he recalls. ‘It’s often when I’m super exhausted and I’m kind of in a different space that a feeling hits, or an image.

‘Then it’s almost as if I’m absent from time for about 10 minutes. And then there’s this whole world that opens up in my head and quickly, quickly I write that down so fast, on any scrap of paper, that my fingers can’t quite catch up.’

This conjured Old Maid Maria (Anamaria Marinca), an ancient wolf-eateress. A near-immortal, shape-shifting witch who can assume the form of any human or animal she slaughters with her obsidian-like claws. Desiring a companion, she sets out to turn a younger woman, vampire-like, to become like her; her ‘witches’ spit’. This brings this scarred and hair-straggled crone to the crib of an infant girl, prompting the terrible bargain when her mother pleads for 16 years with her daughter before handing her over.

Maria seals the deal by stealing the child’s tongue and then is gone, only for the mother to desperately ferry her babe in arms to a holy place in a cathedral-like cave system in the hope of double-crossing the witch and escaping cruel destiny.

What follows draws on folk horror, but is also a surreal coming-of-age movie played out through various bodies borrowed by the young, voiceless kidnapee finding their way in the world. Expect plenty of bodily gore. ‘It’s really funny, because I’m the most squeamish human being alive,’ Stolevski says, laughing.

In another witchy stroke of luck, he penned 13 feature screenplays before finally finding backers willing to give him a shot at directing a full-length drama.

‘I was unemployed for many, many years and I got into a pattern of writing two films that I felt like were somehow makeable, and then the third one would be like, just go crazy,’ he says. ‘Don’t even think about it getting made. And this was the sixth film.’

Despite the power of three at play, he didn’t think Australian producer Kristina Ceyton would pick one of his weirder efforts to back. ‘Would you? Would anyone? Oh my fucking god,’ he roars. ‘But she asked for it and read it overnight. So it’s her fault.’

Ceyton helped usher Jennifer Kent’s The Babadook into the world, after all. While You Won’t Be Alone certainly has folk horror bones, he didn’t think of it that way while filming. ‘It’s more like a drama about [the kidnapped young woman’s] feelings that’s driven by a voiceover in broken Macedonian from the 19th century,’ he wryly chuckles. ‘The way I pitched it to the crew was to think about if a fairytale was based on a true story, and we’re making something that feels like a documentary.’

Emma Bortignon’s incredible sound design captures the film’s discombobulating inner monologue at a much louder and more muffled pitch than the rest of the in-scene dialogue. ‘The whole movie is driven by how to make a viewer feel like they’re under this person’s skin,’ Stolevski says. ‘Emma and I had to fight for the sound to be at that level.’

And thank goodness they won, because it absolutely helps conjure up a remarkable movie that, strictly horror or not, will raise the hairs on the back of your neck.

Starring The Bold Type’s Aisha Dee as Cecilia, she plays a deeply insecure but pretending to thrive Instagram influencer. She’s confronted with a horrific incident from her past when she falls back in with her childhood best friend Emma (played by Barlow) and they wind up in a spectacular rural house an hour out of Canberra to celebrate  the birthday of Cecilia’s former bully Alex (Emily De Margheriti).

Lockdowns helped shine a light on some of the darker corners of the wellness industry, with Barlow also pointing to the shocking story of fake cancer ‘survivor’ Belle Gibson as inspiration for the gloriously schlocky mayhem that unfolds in Sissy. ‘Social media allows us to proliferate people who aren’t good for us,’ she says. ‘We participate in the rise of con artists. We also have an obsession with celebrity worship, and then there’s the horrors of comparison anxiety.’

Something she knows all about, particularly after a stint trying to make it as an actor in LA. ‘That was all the way dialled up for me.’

Preserving her fake life on Instagram leads Cecilia into the midst of a bloody rampage that gleefully churns through a fantastic cast that also includes Pulse star and writer Daniel Monks, Bloom’s Lucy Barrett, and Yerin Ha from the new Halo show. ‘We wanted to put our generation on screen,’ Barlow says of the diverse and queer-positive representations.

The directors had a hoot tearing them apart. ‘I’ve always been a fan of Sam Raimi and the Evil Dead movies, as well as Italian giallo like Dario Argento’s Suspiria, that celebrate gore and practical effects,’ Senes says. ‘It takes a lot of time to shoot that stuff, so you really have to know that it’s worth it. But it was always a non-negotiable for us.’

And when the gruesome starts flowing, much like You Won’t Be Alone, there are no clear heroes or villains, only blood-soaked moral greys. ‘We’re definitely living in the era of the antihero,’ Senes says.

Dee understood that innately, says Barlow, who has been a fan of the actor since her days in The Saddle Club. ‘We both experienced childhood bullying, and Aisha was very clear that she was going to bring that nuance to the character. She really injected her history into the role.’

Sissy even features some special effects overlayed on the murderous action, not unlike an Instagram filter, an idea presented by editor Margi Hoy. ‘She said let’s go bonkers with it, be brave and bold and throw all that glitter-infused blood magic at it,’ Barlow says.

Senes adds: ‘Michael Price our production designer just understood the millennial vibes. It’s not trying to be a dark horror, it’s actually let’s shoot it like it’s an episode of Girls and then let’s turn it into a horror.’