Homosexuality: A Film for Discussion still gives me hope

Canadian activist and academic Thomas Waugh once wrote, ‘if films are to be instrumental in the process of change, they must be made not only about people directly implicated in change but with and for those people as well’. Barbara Creed’s 1975 film, Homosexuality: A Film for Discussion, does precisely that.

Originally intended as an educational film to screen in schools, it is a 43­-minute black-and-white work featuring frank discussions between ‘out’ gay men and women about their lived experiences, and two mothers (one, not mentioned within the film, is Creed’s) of gay children, who speak about their emotional support and changes – if any – with their children after they came out. These considered segments are sensitively spliced between street interviews, or vox pops, conducted by Creed with the general public of Melbourne, who are asked varying questions about their thoughts on homosexuality – some positive, some negative, but all with great candour (some, perhaps a little too much).

For me, first seeing it at the Melbourne outpost of the National Film & Sound Archives 40 years after its initial release, it was not a time capsule but some proof of community, of existence and resistance. Interviewed in 2017 for i­D Magazine, Creed spoke of the importance of documentation: ‘Without [these records], gay people, or any other marginalised group, don’t have their own history. If marginalised groups can’t access their own history it makes them feel impotent, invisible and without a voice.’

Here, in her film, everyone has a voice – and it is a delight to see so many gay Melburnians happily allowing themselves to be explicitly recorded on camera, no mean feat considering sodomy laws were not repealed in Victoria until 1981, aversion therapy was rampant, and the threat of being outed could mean job loss or worse. Creed, now a widely published author and Screen Studies Professor Emeritus at the University of Melbourne, was a founding member of the early 1970s Melbourne gay liberation movement and co-founder of the Melbourne Women’s Filmmaking Group.

Though, for the most part, only her voice is present in Homosexuality, she had already outed herself on national television during Gay Pride Week in 1973 – one of the few members of the gay liberation movement unafraid of this being the way their parents found out. On a recent sunny March afternoon at her home in Melbourne’s inner north, Creed recalls this experience for me: ‘I rang her up and I said, “Mum, remember how you’ve always told me, never, ever worry about what the neighbours think? Well, if you turn on the television tonight . . .”’

Coming out in one’s personal life is already a multi­layered process, and so coming out in public – and in this case, on screen – adds an extra element. Putting a visible face or an audible voice on members of the queer community shines a further light on the act of ‘coming out’ itself. The stakes were particularly high in the 1970s, and as Waugh points out, ‘our filmmakers can never forget that the single act of filming a gay person can expose them to eviction, firing, family rejection, violence, loss of child custody, and even criminal charges’.

During a television appearance in 1972, Creed was asked if she had concerns about repercussions when she returned to work after the show had aired. She says she hadn’t actually considered it beforehand, but responded that her colleagues were far too intelligent to have any such issues. They weren’t all as supportive as she’d hoped, however, and she found that upon her return to the Coburg Teachers’ College, there was a heated debate in the staff lounge. One female colleague reported her to the school’s principal, claiming Creed had made a pass at her in the cafeteria.

Read: MIFF and me: waiting for the 2022 fest is agony and ecstasy

It turned out that she had reported a male lecturer for the same thing a week before, and was doing a master’s degree involving biblical prophecy. Her claims were taken with a grain of salt, but her boss ultimately removed Creed from the school visits she undertook as part of her job, watching and reporting on student teachers.

Two years later, Creed received funding from the Experimental Film Fund (EFF), which was then administered by the Australian Film Institute. The fund was set up to enable young filmmakers with small grants, and little in the way of specification guidelines. Her intention for Homosexuality: A Film for Discussion was to create a film to be taken into schools, where each screening would be followed by a robust discussion with the students.

The title is a nod to the 1973 work Film for Discussion made by the Sydney Women’s Film Group, also funded by the EFF, which highlighted the burgeoning plight of the women’s liberation movement. Of course, we all know that the 1970s was a hothouse for progressive leanings, consciousness ­raising, and great hair – or as Creed describes it, ‘a very radical, political period’. Accordingly, it was also a particularly fertile time for the funding of film projects in Australia – both by governmental bodies and community groups.

A year after Creed’s film premiered, the Gay Film Fund (GFF) was set up in Sydney, raising money for new projects through dances, screenings and barbeques.

The actual ‘casting’ of the documentary was close to home for Creed and it was mostly filmed where she was living in Fitzroy. The bulk of the conversation footage features two couples: Ross Moore and Simeon Kronenberg (who were in the same gay mixed­ consciousness raising group as Creed) chatting informally with Anne Houlihan and Gael Waldron.

All gay participants in Homosexuality have their full names in the end credits. Creed had asked them to talk about four or five main themes: growing up, family life, school, coming out, and relationships. This aided the film to be structured in a way that, when taken into schools, Creed could stop the projector at the end of each section to speak with students about what they had just seen. Quite literally a film for discussion.

The vox pops were conducted by Creed, wearing a suit, and wielding a small microphone on Flinders and Swanston streets in the city, with a few more done in Carlton. She’d tell her prospective interviewees she was making a film on homosexuality and what the people of Melbourne think about it. Everyone agreed to appear, and all had unwaveringly strong views – positive or negative. So as not to shape their answers, Creed did not offer that she herself was a lesbian.

Do you think laws against homosexuals should be changed?

Do you think homosexuality is natural?

Do you know any homosexuals?

Do you usually assume that people you meet at first are heterosexual?

How would you feel if you saw two men kissing in the street?

Do you think homosexuals look different from other people?

How would you describe what a typical lesbian or homosexual looks like?

How would you feel if you had children and they told you they were homosexual?

Do you think homosexuals are happy?

Interestingly, the responses do not align with any one age group of those interviewed, and for the most part are delivered in earnest. Some are staunchly supportive of queer rights, while others invoke Sodom and Gomorrah, and one creepy pastor type with a distinctly Hellmouth­-from-Buffy vibe mentions demonic possession. Only one man employs a little mimicry, waving his hand around and commenting on ‘funny accents’. Beautifully, his own accent is quite distinctive among the rest of the interviewees.

And then there are the cutest little homophobes in all of Melbourne who appear around eleven minutes in. When Creed saw them she says she rushed over with her mic, ‘and it was like manna from heaven’. Four boys, maybe ten or eleven years old, simultaneously angle for and try to dodge Creed’s camera. When she asks if the laws around homosexuality should be changed, the boy closest to the camera chortles, ‘Nah, kick ‘em out!’

Creed, audibly bemused or perhaps exasperated, says, ‘Well . . . why should we kick them out?’ and the first boy replies, ‘’Cause they’re poofs!’ before emitting a high­pitched squeal that sets off all the other boys to pipe up with their thoughts: ‘Because they’re queers and idiots and everything!’, ‘Dress like sheilas!’, ‘Carry handbags!’. Their word-for­word dialogue has become a near-­daily recital in my household.

Creed says, ‘Every time I managed to interview someone like those boys who say such astonishing things, you realise how early the prejudice sets in.’ On a damaged roll of film that was ultimately left out, Creed captured a young man who said that homosexuals should all be flushed down the toilet.

It’s quite hard to imagine (particularly with the challenges facing the more recent Safe Schools program and religious discrimination bill), a group of out homosexuals, filmmakers and activists, rolling a projector into a Victorian classroom in the mid-1970s, ready to openly discuss sexuality with high-school students. Creed recalls that students were eager to engage with the material, mostly asking straightforward questions about what it was like growing up, how did their parents react to them coming out, how did they find partners, and if they’d ever been attacked for being gay.

A visit to Preshil (an alternative school) posed different responses, with ‘out’ lesbian and gay students who already had their own spin on things.

‘We thought it was really important for the students to actually meet gay people,’ offers Creed. ‘Eventually conservative sections found out we were doing this . . . and before we knew it, there was a huge debate going on about whether or not schools – just like the debate now – were the right place to teach students about sexuality.’

Homosexuality: A Film for Discussion also had a life outside of the education system, playing in numerous cinemas and festivals, and was screened at ten p.m. nightly on 4–16 November 1975 as part of a local gay line-up at the former Co-Op Cinema in Carlton known as ‘Melbourne’s theatre for the thoughtful’, alongside Maya Frankel’s Turkish Baths and Don McLennan’s A Point of Departure. A review in Campaign magazine notes that the sold-out season was reprised at the Playbox Theatre.

The article also takes pains to mention that the critic found it ‘entertaining, instructive, thought provoking. It demolishes previous limitations in presenting the realities of homosexual experience, oppression . . . and hope.’  Hope is what I continue to find in it too. 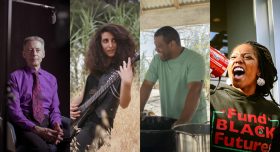 Rita Baghdadi and Aaron Fa’Aoso are among the speakers at the first Regionality Cairns event.

The Indian Film Festival of Melbourne 2022 has a lineup of over 100 films celebrating the best of the sub-continent. 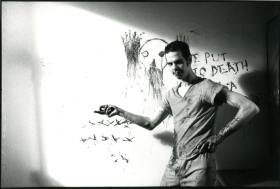 Visions of Melbourne: MIFF presents a cinematic time capsule of the city

From post-prison road trips to a wild re-do of The Wizard of Oz, there’s something for everyone in this filmic…