Ticketyboo: Renee Brack on her Alzheimer’s film about her dad

'I was fetal on the couch with the remote in my hand, treating it like a magic wand' said Brack, whose film about her father's Alzheimer's will play at MDFF.
Silvi Vann-Wall 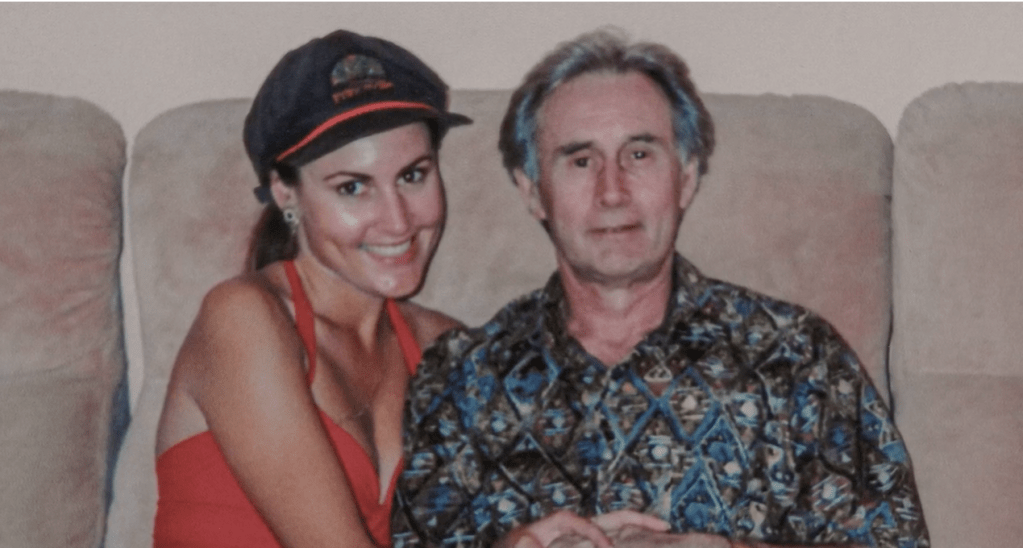 If you had the gene for a deadly disease that had no cure, would you want to know? That was the dilemma faced by journalist Renee Brack after losing her father to Alzheimer’s disease.

Selected for inclusion in the Melbourne Documentary Film Festival, Ticketyboo is heart wrenching and heartwarming in equal measure, and a searing look at the way Australian society treats its elderly.

Thom Brack, a retired decorative plasterer and artist, hid his symptoms, suffering alone, and the impact on his relationship with his daughter was catastrophic. When he died, Renee was left with a legacy of guilt and anger that saw her seek help from a counsellor.

Her journey of discovery, and her agonising decision to subject herself to a grueling range of medical tests to determine if she might one day meet the same fate as her father, became the documentary Ticketyboo.

As she wrestles whether to find out if she carries the gene, Dementia Australia CEO as well as medical experts advise her against it, but driven by a journalist’s determination to find answers, and a daughter’s desire for understanding, she presses ahead towards a shattering conclusion.

Ticketyboo screens as part of the Melbourne Documentary Film Festival on Saturday, July 30 at 3.20pm at Cinema Nova, Carlton and will be followed by a Q&A panel of some of Australia’s leading dementia experts who will be taking audience questions.

We spoke with director Renee Brack about the documentary.

This is such a personal story, Renee – can you talk about your process of A. creating such an honest depiction of your relationship with your dad, and B. making sure you’re not re-triggered by trauma?

Well, I was fully retriggered on a lot of things. My dad was diagnosed in 2006, and at the time I was completely shocked – I knew that he was changing, but I thought he was adjusting to retirement. There’s an old saying that you can’t change the past, but when I looked back, there were a whole pile of clues that I had missed, dating back to 1993.

So, knowing that I hadn’t been the daughter that I should have been while he was alive, I went to a counsellor who said ‘you should do what you didn’t get to do’. And for me that was hosting an art exhibition, and planting a living memorial. And initially I just wanted to make a little film about that. But I started doing workshops with the Documentary Australia Foundation, and had my eyes opened to not just making a documentary from a selfish point of view, but to turn it into a social impact documentary.

What was really triggering was the realisation that it wasn’t the Alzheimer’s that damaged my relationship with dad, but my own fear and ignorance of this disease. That was confronting, and I think the best way to confront fear is to go and tackle it head on. And so I thought, ‘I’ll go and get tested’, which gave me the whole second act of the film.

It was really interesting to hear ‘I wouldn’t be [getting tested] if I was you, Renee’, over and over again. I think that really highlights the general community stigma around getting a diagnosis, and dementia in general. But I went and did it anyway, with the expectation that that would also be part of my healing. And honestly, even after all that, I wasn’t feeling any better. It was only when people have started seeing the film recently that I just felt a real surge of healing – because it’s not about me anymore.

Tell me about why you needed to make this documentary – was it also part of the therapy process you talked about with your counsellor?

It has sort of built onto that, yeah, but I couldn’t have planned it that way. There’s no great strategy that I can take credit for, because initially I was just going to shoot the art exhibition, and the film was going to be quite small. But with the counsellor’s help I started to expand the idea. And once I brought producers onboard and we started doing more research, I was like, ‘Well, why don’t I get tested, and that can flesh it out to a feature length thing?’

Just to put it in perspective – my dad died in 2011. And it’s 2022. That’s a long time to be displaced with grief and regret. It eats away at your soul. And even though I was going through all the motions, I didn’t feel as though doing this film was making me any better. But now I’ve turned a corner.

Were there any points where it became too much and you had to stop production?

Yes, and you’re the first person to ask that. Now I think about it, I can’t count the number of times I was fetal on the couch with the remote in my hand, treating it like a magic wand to take me to any other world but this one. There were many times when I’d look at the film and just go, ‘Oh, this is a pile of crap, and I’ve wasted seven years of my life.’ But after a while I’d get so sick of beating down, and eventually that would drive me back into making the documentary. It didn’t really go on for longer than maybe a day and a night at a time.

The doco has been masterfully shot and edited –  can you talk about the production team and their work?

I would love to! The editing was the one thing that really benefitted because of the COVID lockdowns. There was so much we could do remotely with apps like frame.io, which enabled everyone to comment on the edit. Plus the experienced producers I worked with initially said it would take three months post production time, but they got it done in six weeks. Because we had the luxury of time, we could leave it for a while and look at it again with fresh eyes. So the first edit was completed in January of 2021, and then in May we bought in the second editor, who refined it and changed the narrative.

I was really looking for a greatly empathic editor to pull it all together, because as time went on, the narrative became clearer and clearer to me. I started thinking ‘what’s the audience going to feel? What are they going to think here? Is this bit confusing? Is this emotional beat going to work?’ And so I worked with Fiona Strain, who’s a partner of the Australian Society of Editors. It was wonderful to be sending parts of the cut where she would be able to say, ‘you’re missing an emotional beat here. And I need you to write something,’ or ‘I need this kind of a clip.’

The first two edits were a little awkward, like a kid learning to walk. I was deeply immersed in my own difficulties with the therapy at that time. I can’t give enough credit to Fiona Strain for bringing out the best in me as a writer and director.

Read: Storm in a Teacup – craft, love and dementia

Obviously you want to raise awareness with your film, not just of dementia genes but of aged care … how do you hope people will react to this film? What would the ideal outcome be?

If this can change one person to be a little more inclusive of someone with dementia, then that’s mission accomplished. As for my big dreams, I’d love for it to work its way up the food chain to a policy level, so we can have safe spaces for people with dementia and their carers to go.

And that’s the big plan for the impact overall, with an initiative that we’re just starting to test now called DemSafe, which would create safe spaces specifically in shopping centres. So, it could be a cafe where you can sit and leave someone for five minutes, or when a person uses the restroom. We’re already in talks with a shopping centre that’s thinking about expanding their amenities to have more unisex areas where someone can just have a sitting space outside the actual toilet cubicle, to wait and/or help their loved one with dementia.

If I can put my producer hat on, I hope that it may motivate some philanthropists and organisations to go, ‘how much is the impact campaign going to cost? Well, here’s a budget I’ve prepared earlier.’ Because we have to start fundraising for that, which happens after this premiere screening in Melbourne. And it’s a really hard slog getting people to want to donate to something.

You say in the documentary that you became the ‘poster child for doing dementia badly’ … well, I disagree, and I want to know if you’ve changed your mind now?

You know what, no one’s asked me that either. You’re actually making me reconsider that now. Because I do say that as if it’s still true. We build narratives around ourselves, and I haven’t even questioned that I’m not the poster child anymore.

I do think as this year unfolds and the film gets out there that I will become the poster child for rectifying that. As an example, I’ve learned through this film that asking open ended questions of people with dementia was not healthy. I would ask my dad, ‘how are you?’ And he just looked at me and he’d say, ‘I don’t know.’

And I would blow that off thinking he was just being difficult and cantankerous. But if I asked him very specific questions, it seemed to work better, like: ‘are you happy today?’ So it was a yes or no thing. You don’t ask somebody, ‘where’s your socks?’ Because they might not be able to even process where they used to be. But if you give them the options of: ‘Do you want to wear the red socks today, or the blue socks?’ then they can pick one. And they also feel engaged, and respected.

So learning how to talk like that and ask the right questions – that was a whole new education for me.

Ticketyboo: A Secret in Plain Sight shows at the Melbourne Documentary Film Festival on 30 July, at Cinema Nova. Tickets can be purchased from the Cinema Nova website.