Honed on live performance and online, the wacky Australian comedy team finally gets a proper TV show on the biggest platform around. They just keep getting funnier, says Anthony Morris.
Anthony Morris 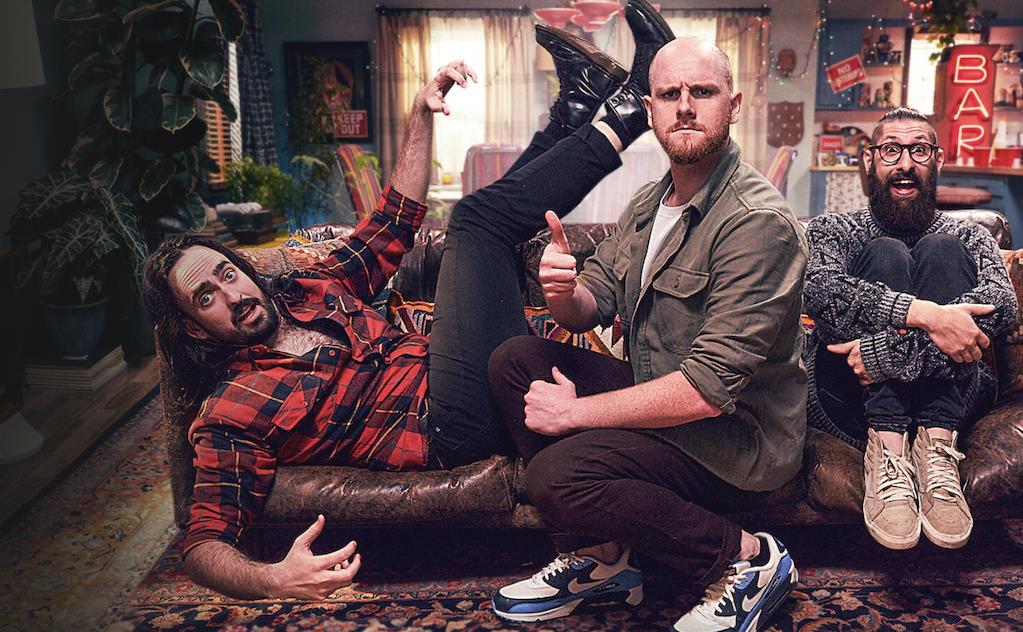 Australian comedy team Aunty Donna – Broden Kelly, Mark Bonanno and Zach Ruane – have been around for close to a decade now and they just keep getting funnier, which makes their debut TV series both a relief and a bit of a head-scratcher.

It’s a relief because they’ve been good enough to make the jump to broadcast television for years now, as anyone who’s seen their earlier pilots – Aunty Donna for the ABC’s Fresh Blood initiative, Chaperones for Stan – already knows. It’s a head-scratcher because despite being one of the brightest stars on the Australian comedy scene for a while now, and with multiple local pilots under their belt, Aunty Donna’s Big Ol’ House of Fun is debuting on US-based streaming service Netflix. What happened to local networks supporting local comedy?

To be honest, you don’t have to be an expert on Australian television’s recent comedy output to realise that Aunty Donna’s Big Ol’ House of Fun is not exactly the kind of thing they’d go for. Having honed their skills on live performance, short-form online series and podcasts, Aunty Donna have created a series that’s fast moving and often abrasive in a way that risks turning off the rusted-on viewers whose tastes increasingly dictate local TV production. On the other hand it’s very funny, and it’d be a real shame if there wasn’t room for that on local screens.

Whether you consider this a sitcom where anything can and does happen, or a sketch show where Broden, Mark and Zach live in the same house and usually play the same characters, doesn’t really matter. An opening musical number that lets us know that ‘Everything’s a drum’ sets the tone… or at least, it does once it lets us know that yes, even a ‘willy’ can be a drum and if not everything is a drum than at least two of the housemates have thrown away their old lives to follow a false god. Then the washing machine starts talking, reveals she’d like a break on her rent what with doing all the dishes, and ends up out on the street. Time for a new housemate, which is why this episode is called ‘Housemate’.

Non sequiturs and abrupt tonal shifts can often wear out their welcome in comedy, but Aunty Donna put just enough of a twist on them to keep them fresh – see the second episode’s opening song ‘Morning Brown’, which rapidly shifts from a celebration of morning coffee to explaining exactly what was going on the previous night to keep the trio up late (it’s one word and it rhymes with trucking).

Aunty Donna have created a series that’s fast moving and often abrasive in a way that risks turning off the rusted-on viewers whose tastes increasingly dictate local TV production.

Not every joke in this series is going to be for everyone, but Aunty Donna do have a very high strike rate. They’re the rare recent comedy act that knows exactly how to play the ‘if we do this obvious joke long enough it’ll get funny again’ card, and while wacky surrealism is their stock in trade, they know just when a scene needs a foot (or character) firmly in the real world to make it work.

Less is often more with this style of rapid-fire comedy, which has largely prospered in short bursts on YouTube or the ten minute slots popular on US cable comedy channels. Thankfully, this is varied enough to leave viewers wanting more even at just over twenty minutes an episode. There are no real characters here – each of the trio shifts roles depending on what a segment requires – but that variety keeps the show fresh, even when it’s an extended riff on renaming your wifi ‘PooPoo’.

Read: Film Review: Rams rides home on the sheep’s back

Whether Netflix’s global audience will get a references to Grant Denyer, Four and Twenty Pies, and a cameo from Randy (as in Sammy J & Randy) as ‘The Puppet’ seems beside the point. Aunty Donna are a world-class Australian comedy act making their television debut on a service available in Australia, and if local networks are falling behind when it comes to giving local comedians a shot we’re going to see this kind of thing a lot more often.

Also, episode two features a scene where a character sits down to rest, then a cut reveals they’ve died of old age and turned into a skeleton, which is one of my favourite jokes ever.