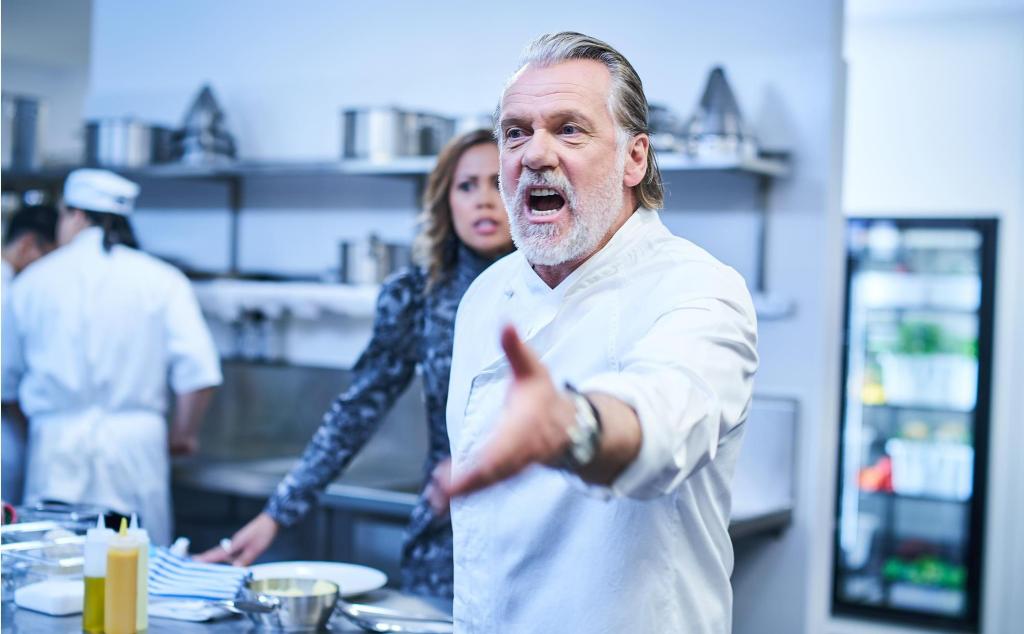 Over the last decade or so Australian television has delivered only a handful of real sitcoms to comedy-starved audiences. Aftertaste is not one of them. It’s not even trying to be: the press material describes it as a ‘comedy-drama’, and anyone with even a passing interest in local comedy knows that when you add any other word to ‘comedy’ the laughs will be few and far between. Does this make Aftertaste a bad series? Not in the slightest – just don’t expect a barrage of zingers.

Celebrity chef Easton West (Erik Thomson) has gone over the edge. He’s assaulted investors, thrown half a pig at a food critic, and stamped on a fan’s phone – and that’s just in one night. So now he’s back in his childhood stomping ground of the Adelaide Hills, where his snooty sister Denise (Susan Prior) and feral dad Jim (Peter Carroll) want nothing to do with him. Only Denise’s daughter, sassy nineteen-year-old pastry chef Diana (Natalie Abbott) sees him as the star he once was. Of course they go into business together. What could possibly go wrong?

It’s a solid comedy set-up from writer/creators Matthew Bate and Julie De Fina, and there are a number of fun moments with the supporting cast where the broad sitcom this could have been peeks through. Jim gets into a wrestling match and is left trapped in a skip; in later episodes Rachel Griffiths plays a vaguely predatory organic wine producer who takes a shine to West’s ‘moderately impressive penis’. That said, this isn’t a series about Fawlty Towers-style antics in the kitchen; a pillow fight in a mattress store is about as physical as the comedy gets.

Read: Aftertaste, Closer Productions, and the road to a dynamic story

While the laugh lines can be little more than inappropriate comments or colourful swearing (at one stage West goes off at an emu), the mood is always spot on. Director Jonathan Brough (Rosehaven, The Family Law) is a master at providing shots of delicious food and gorgeous South Australian scenery, and the cosy wintry setting provides just the right atmosphere for this story of dedicated foodies and their artisanal products.

Both Thompson and Abbott give strong performances, constantly engaging in the difficult job of playing characters that don’t so much progress as struggle to move beyond the ruts they’re in. There’s the impression at times of a comedy that’s been sharpened into a character drama, as what initially seem like broad stereotypes are constantly worked over to reveal new depths.

what initially seem like broad stereotypes are constantly worked over to reveal new depths.

West is clearly a monster who’s slunk back home to hide out but is too proud to admit that to himself, and while it’s certainly realistic that he wavers between accepting his fate and retaining his old arrogance, it does give his side of a story a bit of a stop-start feel. He’s never quite someone you love to hate; he’s either endearingly flailing and failing to cope with his new status, or he’s just plain cruel. He also calls Nigella Lawson ‘a hack’, which would probably light up the ABC switchboard if they still had one.

Opposite him, Denise is a sassy in-your-face teen with a touch of the Rebel Wilsons about her, which is either fun and fresh or grating, depending on how you feel about Wilson. The scriptwriters definitely know what they’re doing with her – having West snarl: ‘If there’s one thing I can’t stand, it’s fat girls playing the wacky zany card to cover up their insecurities’ to her face makes that pretty clear – but she’s still a character who says to an uncle she’s never met ‘I got fingerbanged there’ while driving him through town. (In a later episode she also makes a pastry shaped like a vagina to celebrate losing her virginity. West yells at her for it, calling it crass and immature. If you think he has a point, the show doesn’t agree.)

What at first seems like a comedy about a mismatched duo trying to get a restaurant going under a ridiculously tight deadline turns out to feature lengthy stretches of character drama as both West and Diana struggle with their pasts and potential futures. It’s a dramatic burden the cast are more than up to, and while the series’ most successful moments are often the ones with the lightest touch, their darker scenes have real heft.

Broad comedy and a lush Good Weekend photoshoot vibe don’t really go hand in hand, and Aftertaste probably made the right choice in mostly going for the latter. What outright comedy there is here is the garnish; it’s the likeable characters dealing with food as a metaphor for family (and vice versa) that are the main course.