Film Review: Rhapsody of Love is a warm and diverse rom-com 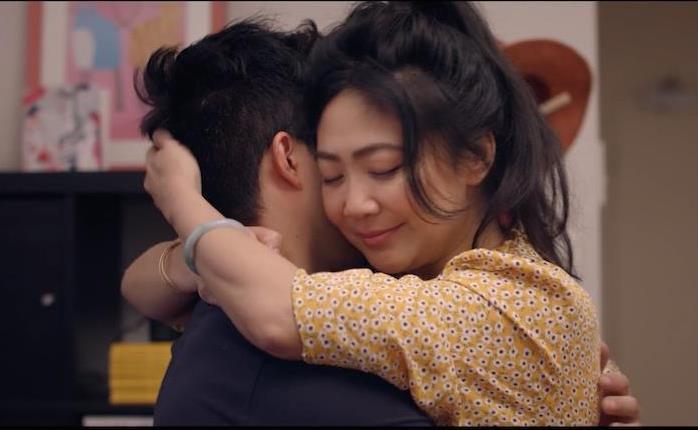 Note: This review was originally published 23 April 2021 but has been republished to coincide with the film’s release in Dendy Cinemas.

If the hit rom-coms Crazy Rich Asians and Love Actually got together and had a baby, it might look like Rhapsody of Love. As the first ever Asian-Australian romantic-comedy, it ticks all the boxes for representation and diversity with Asian Aussie leads and a powerhouse team of women in key creative roles. It’s likeable, funny and heart-warming.

The story follows four Sydney couples at different stages of their relationships, but primarily focuses on the charismatic Jessica (Kathy Luu), an event planner who meets a dashing wedding videographer, Justin (Damien Sato). But it’s Jessica who is the film’s heart, setting the tempo and bringing humanity and empathy. Luu is a natural performer who brings layers of depth to her role, and audiences will enjoy her warmth which radiates through the screen. Ben Hanly and Jessica Niven play newlyweds adding humour, romance and occasional real-life relationship advice.

Luu is a natural performer who brings layers of depth to her role, and audiences will enjoy her warmth which radiates through the screen.

Rom-coms often promote traditional male and female roles, but this film has an empowered, modern day, female lead who is not only caring, passionate and forgiving but also emotionally strong. The lead lovebirds go beyond the usual stereotypes and tropes of the rom-com and instead, Rhapsody of Love succeeds in presenting a healthy romantic relationship. Themes of anxiety and mental health are explored with nuance, and aspects of body positivity are subtly embedded in the film.

Cinematographer Goldie Soetianto, who is also of Asian heritage and an AFTRS graduate, creates beautiful images with warm lighting. She uses artistic camera angles, such as the top crane shot of Jess, Justin and Ben, chatting while lying on the carpet which evoked intimacy and fun.

This is the third independent feature film from Joy Hopwood (The Script of Life, The Casting Game) who is a passionate advocate for diversity, and creates opportunities for underrepresented cast and crew. It’s also produced by Ana Tiwary, who runs the Diversity in Australian Media Facebook group [and collaborates with Screenhub and Arts Hub on projects supporting diverse writers]. So it’s no surprise this is a story that bridges a gap in the Australian film industry, casting Asian-Australians as romantic leads. Despite budgetary constraints (the film was made entirely independently, and partially crowd-sourced), it’s a great achievement: a small film with a big heart.

The unique and nuanced experience of being an Asian person living in a western country is rarely captured. Filmgoers may view an Asian movie and assume it is a cookie cutter experience for all people of Asian descent. However, Rhapsody of Love portrays the distinctive stories and lives of Asian Australians which resonates with me, and will for other people of colour.

All in all this is a fun, light hearted-story, and a perfect date movie. Catch it at the Gold Coast Film Festival  this weekend.

Rhapsody of Love had its World Premiere at the Gold Coast Film Festival on Saturday 24 April 2021. It is screening in Dendy Cinemas in Sydney, Brisbane and ACT from 25th June.

Andy Trieu is a presenter, writer, and senior content producer based in Sydney. He’s been a part of the SBS family for 8 years and has had work featured on channel NINE kids, Ten Comedy, and the ABC. Andy is a renowned voice in Australia's Asian pop culture industry (hosting SBS PopAsia) and has a passion in Martial Arts.