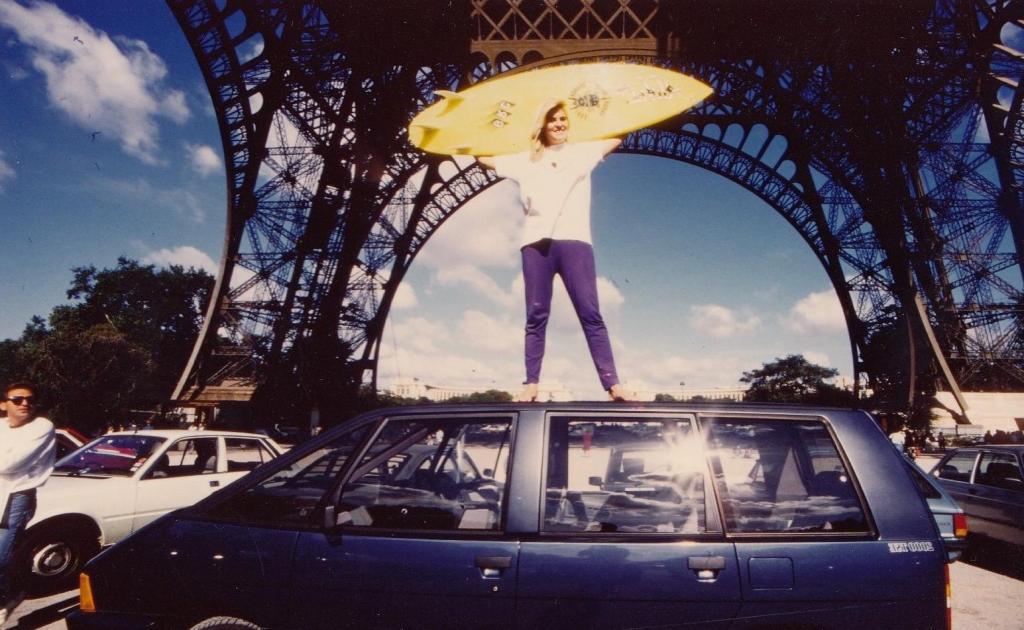 Bikinis! Bikinis! Bikinis! For most observers, women’s only influence on the sport of surfing was the pin-up models in high-cut swimsuits who graced the beachfronts in bikini contests and on the pages of lad mags.

Christopher Nelius’ lively (if mostly formula-following) documentary Girls Can’t Surf seeks to reconstruct that narrative. Getting maximum impact out of nostalgia for its DayGlo -nfused 1980s backdrop and the retroactive humour to be found in the sexist opinions of men from the time, Girls Can’t Surf has a similar social appeal to Catherine Dwyer’s Brazen Hussies, but with foam boards instead of protest placards. It also continues a recent non-fiction trend of societal retrospection from the perspective of minorities.

An interview line-up of female surfing icons and world champions litter the film’s plentiful and entertaining talking head sequences. Names featured include those from Australia (Jodie Cooper, Pam Burridge, Layne Beachley), the USA (Frieda Zamba, Lisa Andersen, and sisters Jorga and Jolene Smith) and South Africa (Wendy Botha). Interspersed with some male commentators who are there to confirm the misogynistic attitudes of many of their colleagues (if not necessarily their own), they offer anecdotes and commentary that – like most films about the subjugation of women in our society – are at once infuriating and an astounding time capsule.

Considering the film wades into contemporary issues regarding the pay gap in sport, it’s clearly a time capsule that hasn’t yet been entirely smashed apart.

Plentiful archival footage has been assembled by editor (and co-writer) Julie-Anne De Ruvo to highlight not just these expert athletes’ skills in the waves, but also the way they were so appallingly treated by the surfing associations of the world. In one of the film’s best sequences, a camera wisely captured the women silently protesting being forced to ‘entertain’ the beach crowds by paddling about in the sudsy shore-waves while the men wait for the larger, curling waves that the audience wants to see. It’s a great moment that most people will have never been aware of, kicking off the doc’s empowerment-themed final act.

The rest of the production team are clearly having a lot of fun with the retro vibes, too. While the inclusion of songs like Joan Jett’s “Bad Reputation” and Bikini Kill’s “Rebel Girl” perhaps lacks imagination, score composer Haydn Walker does fine work. And when coupled with its bright, neon-infused colour palate of hot pink and crystal ocean blues, this documentary has more of a visual link to 1980s genre fare like Puberty Blues and BMX Bandits than most Australian non-fiction fare. While it is hardly reinventing the wheel, it’s a pleasing change of pace to see a film like this embrace the electric aesthetics rather than tamp them down for the sake of gritty realism.

Even before the vibrant opening credits, though, Girls Can’t Surf attempts to fit into a key lineage of Australian film tradition. Surf in our cinematic storytelling lore is a long and storied one that goes far beyond Tim Winton adaptations (Breath) and the aforementioned Puberty Blues, stretching further back to experimental works by the likes of Albie Thoms. The surf documentary is a famous sub-genre of sorts, allowing the sport to reach the sort of commercial and aesthetic heights that weren’t common for the artform in the 1970s with classics like Alby Falzon’s Morning of the Earth and David Elfick’s Crystal Voyager (with its mythical near-25-minute surf montage set to Pink Floyd’s “Echoes”) the most famous and culturally lasting examples.

Is it curious that Girls Can’t Surf doesn’t mention Women in the Surf, a 1986 documentary about 1950s surf pioneers Isabel Letham and ‘Ma’ Bendall? Definitely. And would it have been nice to see this film adopt some of the shaggier and artistic elements of these earlier landmark films? A little bit, yeah. But the truth is that the images in Girls Can’t Surf were – and in many ways remain– revolutionary and groundbreaking. The force of their impact maintains a thrilling interest that persists through its subjects’ hardest moments dealing with homophobia, anorexia, and domestic violence. It’s in passages devoted to these elements that the film reaches its emotional peak.

In 2007, Sunny Abberton and Macario De Souza’s Bra Boys kicked off the renaissance of mainstream success for locally produced documentaries – it surpassed a 20-year-old record to become the highest grossing non-IMAX Australian doc for a period. It would be a lovely treat to see Girls Can’t Surf recapture some of that past glory. Nelius’ earlier documentary, Storm Surfers 3D, did good figures too. After an impressive launch at the 2020 Tribeca Film Festival in New York, global success should be easy to find on the festival and streaming markets. It may not make up for decades of neglect by the sport, but the time is right for this film’s colourful, reverential look back.