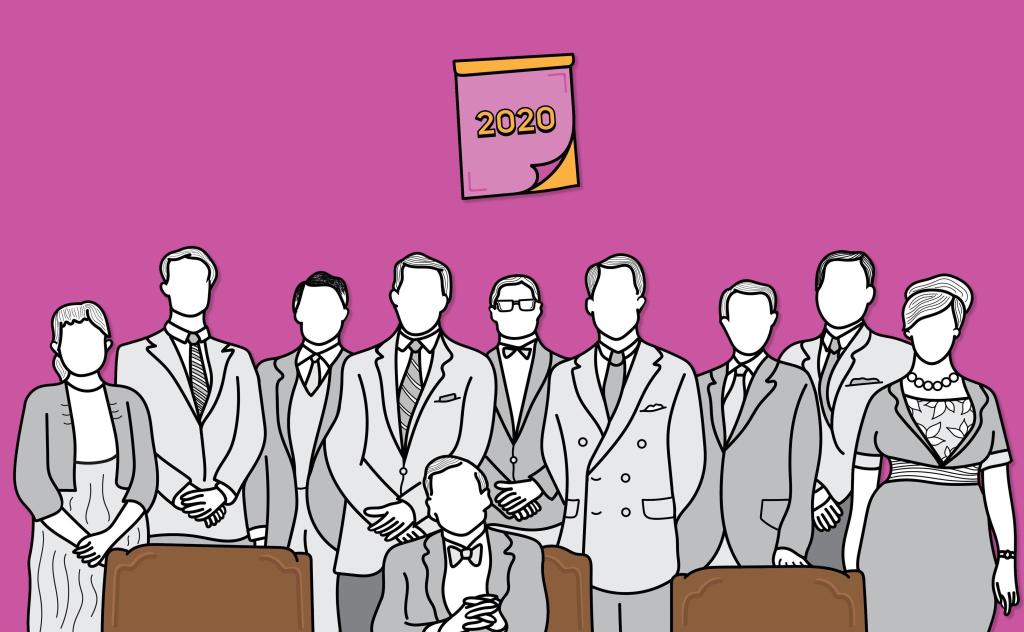 Artwork by Alayna Kunitake, a Japanese British Art Director based in Melbourne. Supplied.

If you’re sick of it, then you can imagine how tired I am of bringing it up.

I’m a proud ABC – Australian Born Chinese, but growing up all I wanted to be was white. The people at school were predominantly white, just like everything I watched and read. I was desperate to fit in and be accepted. The struggle to find a reflection of myself had me relating more to the monsters in stories that couldn’t be seen in mirrors than the heroes that slay them. I felt uncomfortable in my own skin and looked down on myself as if I were the gross mould on white bread. It’s taken me a long time to understand that self-hatred stemmed from a bigger problem. Systemic racism is like death by a thousand cuts. It’s easy to let one instance of lack of representation or harmful stereotype slide, but many small pains can quickly build to unbearable aches.

Over the years Australia has been evolving to embrace diversity and be accepting of many cultures. Especially now as one in four people in this country are born overseas. Australia is a melting pot and a salad bowl, rich in vibrant unique cultures, which all stem from a universal language of family and love. It’s multicultural AF! But why isn’t this mirrored in our media?

This is especially the case with Australian advertising. Lately, advertisements have been driven to showcase ‘inclusivity’, but if and when a POC is portrayed, there’s often a lack of cultural authenticity displayed in the campaign.

Ads go beyond just selling products and services. They are a huge part of popular culture and have a massive reach. It’s brands telling stories that are designed to make an impression and be memorable. There’s a danger, however, in the continual ‘white aspirational’ images that are ubiquitous across the many platforms.

Many ads look like paint swatches of various skin colours, or if they do feature a POC talent they are often ethnically ambiguous. If you can’t pinpoint the talent’s ethnicity then you can’t exactly say it’s not diverse. Cultural representation isn’t going to be authentic if you merely sub a POC in for a white person. It lacks substance and feels misguided. It’d be like saying Kantong is a traditional Chinese dish.

This isn’t surprising considering that 78% of people in the industry creating and holding the megaphones for brands are white [PDF].

The words ‘advertising agency’ conjure up the image of the TV series Mad Men (2007 – 2015) set in the 1960s in the ‘golden years’ of advertising, portraying predominantly white male characters. Now 60 years later, sadly the image of this period show’s cast looks eerily similar to the Australian advertising experts of today.

Cultural representation isn’t going to be authentic if you merely sub a POC in for a white person. It lacks substance and feels misguided. It’d be like saying Kantong is a traditional Chinese dish.

There has been a recent uptick in workplace diversity quotas, which is incredibly promising. It’s setting up the building blocks for a promising future. But it’s struggling to catch up to the now normalised face of multicultural Australia. The diverse hiring is predominantly in junior and mid-weight roles. But it can be hard to have young voices/views heard by white seniors and advertising veterans.  Much like pushing a boulder up a hill it’s hard to effect change from the bottom up. The most impactful changes will often be from the top down, because people with power are able to empower others.

Being a minority generally means struggling to fit into these homogeneous environments. Sometimes the feeling of being ‘othered’ has me slipping into the same assimilation tactics I relied on growing up, avoiding conversations with the subject of race, and adopting white culture wherever possible. It’s a double whammy when you’re sometimes the only woman in the room too.

From the agencies to marketing teams to production companies, directors and crew, there’s predominantly a strong cis-white blokey monoculture that heavily permeates. If this doesn’t change, then the work output is only going to be cookie-cutter ads that all look and sound the same. This is the opposite of what ads should be, because isn’t the definition of insanity doing the same thing over again and expecting different results?

I’m fairly fortunate that the agency I currently work at is a majority of minorities. There’s a huge advantage in having discussions about differences and similarities in cultural lived experiences as part of the water cooler talk. The conversations and collaborative ideas lead to the creativity. Different viewpoints and perspectives mean more fresh and innovative solutions to problems.

Innovative ideas = engaging campaigns = business success. It’s a win-win for employers to continually ensure they are being diverse at their core and providing seats at the table for everyone.

THE NEED FOR RACE LITERACY

When it comes to casting there’s nothing more awkward than being a POC in a room of mostly white colleagues talking about racial casting. The lack of knowledge on appropriate language rears its ugly head. Phrases such as ‘we need to include an ethnic person’, or ‘can we have someone more tan or darker?’ are unfortunately quite common. The way we view our talent is translating to our ads.

What’s most troubling is the lack of specificity in the casting of race.

If an ad feels like it’s just ticked an ethnic diversity box, that’s probably because it has:

But when it comes to casting a white person it seems ok to discuss the subtleties of whether they look Eastern European or Irish, etc. The racial stereotyping has resulted in Aboriginal and Torres Strait Islanders, and African and Middle Eastern ethnicities being the least represented in ads. Sadly, minority races haven’t been afforded stereotypes that align with the outdated ‘aspirational’ image brands want to sell to their customers.

It also feels like there’s fear about heroing POC talent. It seems there’s an unspoken mindset that only a white person can sell a product or service to the masses, but a POC will only be able to speak to other POCs. As a producer, I dream about sitting in a room and hearing people say ‘no they look too Chinese and we’re wanting someone of a Korean origin’, because the ad is set in a Korean BBQ restaurant. Such specificity is a sign of respect and will not only sell the product better, it will help to increase the literacy of the wider viewing audience.

As African American author Jacqueline Woodson says, ‘The more specific we are, the more universal something can become. Life is in the details. If you generalise, it doesn’t resonate. Specificity of it is what resonates.’

RACE TALKS ARE NOT TABOO

At the previous agency where I worked, they held an all-staff gender literacy workshop run by Chalk Circle. This workshop had everyone involved in unpacking sexism – from language, to representation, to unconscious bias. It was enlightening and therapeutic to hear everyone’s individual experience in the workplace through a gender lens and it was extremely beneficial in aligning everyone to strive for gender balance with a renewed sense of empathy.

For an industry that’s accountable for representation on a mass scale, knowledge of race literacy should be fundamental.

For an industry that’s accountable for representation on a mass scale, knowledge of race literacy should also be fundamental. Just because kids are now finally being taught this in school doesn’t excuse us from skipping the class as adults. There are so many awesome organisations and initiatives out there providing the tools and knowledge, such as Democracy in Colour and Rare with Google through workshops and masterclasses.

Assumptions about what is right or wrong have been the downfall of representation. This can easily be avoided by creating spaces where everyone can get uncomfortable for a moment and have an open dialogue. Racism shouldn’t be treated as a taboo subject we tiptoe around. If I’ve had to be uncomfortable being Asian for most of my life, then surely you can handle a tough conversation for five minutes.

By entertaining the awkward and hard talks about my identity, I’ve been able to overcome my qualms about my ethnicity and fully embrace my Chinese heritage. If we stop walking on eggshells, the same anti-racism effect will be had on a large scale and diversity can be embraced holistically.

As a child, my fight was for survival and tolerance.

Now, as an adult, my fight is for representation and acceptance.

I do believe that ads can be inspiring, evocative and exciting. They are a powerful tool in mass communication, and certainly have the ability to change the ‘white normal’ that’s still being perpetuated. But this will only happen if the industry can catch up with reality.

What we need is ads for everyone, made by everyone.

Annie Thiele is a Chinese Australian producer and writer. Her days are busy producing ads whilst her nights are dedicated to various film projects. In between she’s desperately exploring her identity as a young biracial woman. She’s currently developing a series, Sweet & Sour which is loosely based on her own life as part of the Stan & Film VIC comedy initiative.