Thalu is Doing it for the Kids

Producer Tyson Mowarin talks about the extreme labour of love involved in making a 10-part Indigenous kids' show in the Pilbara.
Rochelle Siemienowicz 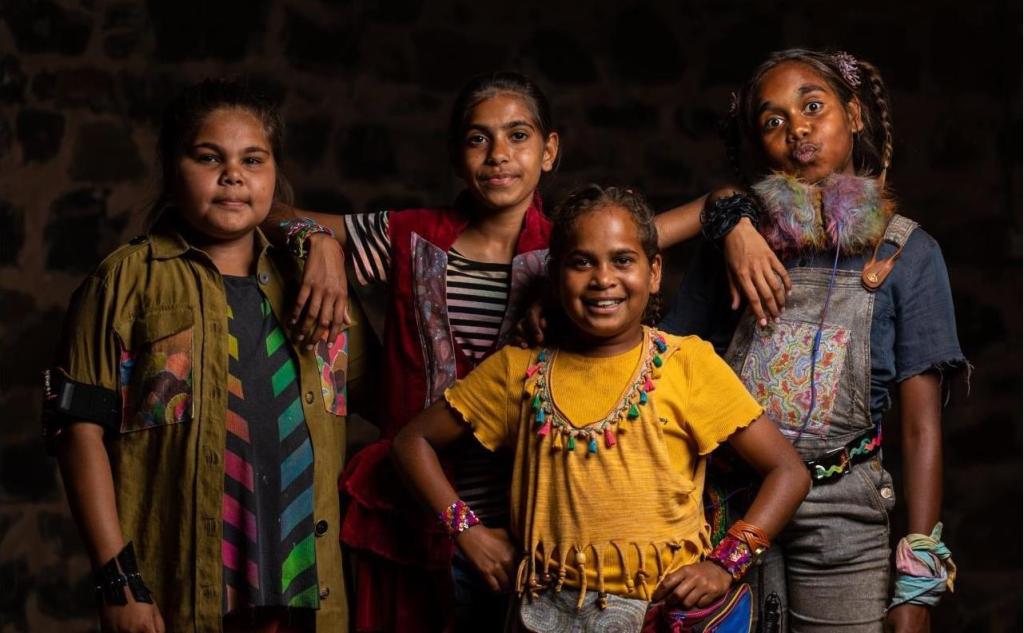 Red dust, blue skies and slightly feral-looking kids in crazy costumes go up against marauding intruders. This isn’t Mad Max Beyond the Thunderdome, but there’s a touch of the steampunk vibe in Thalu, NITV’s new 10-part live action Indigenous kids’ show debuting this week on the network, and also on SBS On Demand. It’s NITV’s second foray into the live action kids’ space (after Grace Beside Me) and comes in the wake of the successful animation Little J & Big Cuz.

Very loosely Inspired by the Indigenous Neomad graphic novels, Thalu was co-commissioned by NITV and the ABC, with investment from Screen Australia, Screenwest, the WA Regional Film Fund, and financed with support from the Australian Children’s Television Foundation (ACTF). The story follows a bunch of 10-12 year-olds who undertake a journey to save their Country from the threat of an ominous black cloud and its inhabitants, known as the ‘Takers’.

Shot and set in WA’s remote Pilbara region, the series was made in and around the little town of Roebourne, home to about 900, with a large Indigenous population. Proud Ngarluma man, Tyson Mowarin, is the powerhouse at the heart of the production. He’s the indefatigable producer, director, musician and community activist, who, with Robyn Marais helms Weerianna Street Media, a company formed in 2011 to ‘present films about the power of country that can heal and connect’. Weerianna’s credits include the NITV slow TV doco Marni about Mowarin’s ‘nanna’, Pilbara artist Allery Sandy (who appears in Thalu as one of the many delightful ‘Nannas’); the documentary Connection to Country; the award-winning short drama Undiscovered Country; as well as a Welcome to Country mobile app, interactive comic and VR experience.

But making Thalu as been by far the most ambitious project Mowarin has ever tackled. Talking on the phone to Screenhub in the week leading up to the show’s premiere, he said, ‘The scale and  production values on this project were just so much bigger and better than anything we’ve done before. This is drama, and it’s a series, so the crews are huge, you’ve got multiple cameras, lighting, costumes, the whole show. A production of this size was new to Weerianna, but also new to the community as a whole. And I do always say that this is a community project, because everyone was involved.’

Mowarin’s own daughter, Sharliya, is one of the main cast of untrained kids from the local community. He says that working with children was another big mountain to climb, and keeping them happy and engaged took effort, especially in the first weeks of the 8-week shoot. ‘At the start, they had difficulty understanding why we had to do the same scene over and over. We had to explain why we were doing it from different angles, and doing group shots and then individual reaction shots,’ he says. ‘By the end of it though, they were sailing through. They’re all really keen to act again if they’re given the opportunity.’

Creating opportunities for his local community is key for Mowarin, who seems more a man of action than of words. When asked why he wanted to do the series, he says he wants to creates future opportunities and professional experiences, ‘not just for this generation but for the ones after. This sort of stuff is about creating more of an industry, a pool of young people who are creative and working. I also want to challenge any negative perceptions of this little WA town and its people, and show that there’s a creative hub of people here who can really make things.’

As for whether that black cloud in the story is a metaphor for anything, Mowarin does have powerful words. ‘Yep, that’s a bit of a metaphor for the mining companies and the destructive people who come and destroy our country for profits and gain. These kids and us fellas are surrounded by those clouds up here. Those people are coming across the Pilbara and across WA like a toxic cloud and altering the face of the country for more money.’

Read more: You know this fella called Shakespeare? An interview with Tyson Mowarin

Bernadette O’Mahony from the ACTF is an Executive Producer on Thalu, and says, ‘Tyson is uniquely placed to produce projects in the Pilbara, as a respected leader in the Roebourne community, he actively brought community into every element of the series, from development, behind the scenes and in front of the camera; and his intimate knowledge of the land and locations was integral to the various looks the series achieved. He really wanted to showcase the different visual landscapes Roebourne and the Pilbara had to offer. ‘

O’Mahony also said that it was an extremely challenging shoot. ‘We had just about everything you could think of, remote locations, a group of young local first time actors, some extremely hot days, and even animals. But there was such goodwill from the crew, cast and all the guest actors to do something special in and with the community and it shows on screen. Some of our guest actors flew across the country to do only a day on set – for some it took them longer to get to Roebourne and back than there were actually on the ground for the series – but everyone was so generous and wanted to be a part of it and mentor the young cast and do something unique for the child audience. It was a very special production in that way.’

The guest actors she’s speaking of include experienced performers like Elaine Crombie, Trisha Morton-Thomas and Hunter Page Lochard. Mowarin says these actors were incredibly generous with their time and skills in helping the youngsters on set. Behind the camera too, the key creatives and crew were predominantly Indigenous. The show was written by Beck Cole, Samuel Paynter, David Woodhead, Donald Imberlong and Nayuka Gorrie and episodes were directed by Mowarin, Hunter Page Lochard, Dena Curtis and Amie Batalibasi. The show was also edited in town, with the theme song written (by Mowarin) performed and recorded there too.

Asked what he’s most proud of, Mowarin says with characteristic understatement, ‘Just the fact we pulled it all off really!’ When pressed, he adds, ‘There’s not many kids’ shows that have an all Indigenous cast made by an indigenous culture company in a small remote town in Australia. Yeah.’

Indeed. And lest you think up in the Pilbara they might be moving more freely, less impeded by COVID-19 restrictions, think again. ‘We’re all locked down up here’ says Mowarin. ‘We were planning a big community get together and a red carpet to watch the show on TV but we’re all going to have to do from home.’

Thalu premiered on NITV on April 20 at 6:30pm. Catch up is available on SBS On Demand.