Producer Belinda Dean and writer Emily Dash talk about their Digital Originals project and developing a character who happens to live with disability.
Rochelle Siemienowicz 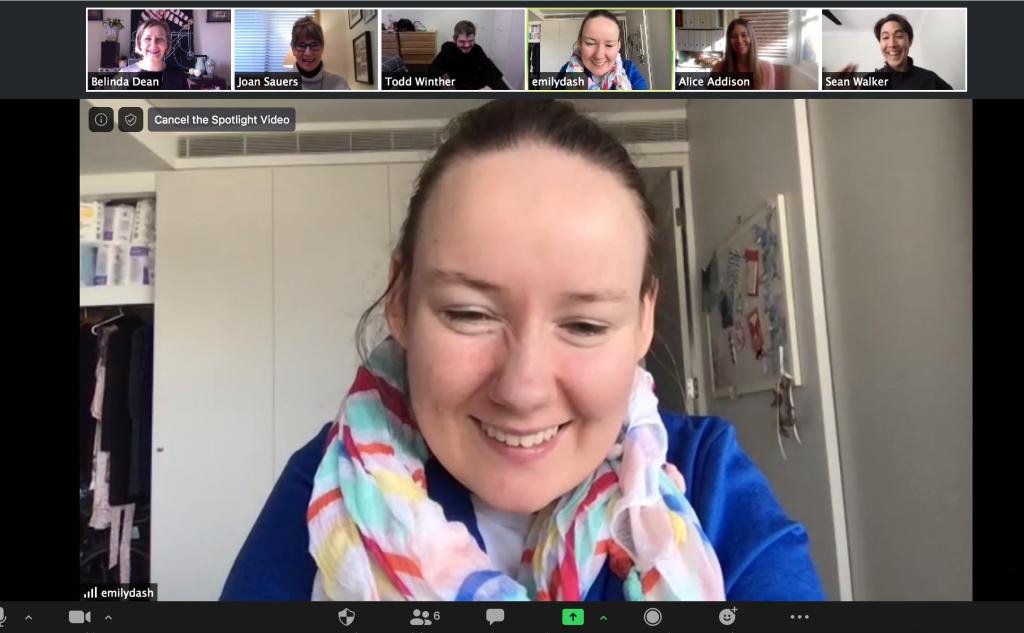 Belinda Dean’s company is called Unko, inspired by the word ‘unconventional’. Among her credits as producer are a number of successful and definitely unconventional short-form productions, including Joy Boy (2018) and Cloudy River (2020), both currently featured by SBS’s Rainbow Pride Collection.

In 2019, Screen Australia and SBS called for applications for the short-form Digital Originals initiative. This was aimed at providing ‘tangible opportunities for writers from backgrounds unrepresented in the Australian screen sector.’ Seeing the call, Dean remembered an idea she’d had for years in her bottom drawer. The story concerned a teenage boy living with disability and collecting cans for cash to raise money for something he wanted very badly.

Dean needed a collaborator with lived experience of disability. As she said to Screenhub, ‘Where we are now in terms of the evolution of filmmaking is that it’s got to be more than just rudimentary consultation. You have to engage and involve active members of that community in your storytelling. I honestly think that part of the reason this idea of mine stalled for so many years was that we weren’t in that headspace yet in the industry.’

She asked around for suggestions, and everyone mentioned actor, writer and motivational speaker Emily Dash. Dash was a playwright who had also co-written a short film (The Milky Pop Kid, 2017). She’d interned with Matchbox in 2017 as part of the ScreenAbility program. There she had sat in on writers rooms, learning the art of television writing across season one of The Heights (a show with a groundbreaking depiction of disability) and season three of The Family Law.

The producer and the writer met and quickly realised they could work together. Their project, Freewheelers, was selected for development along with ten others, and they participated in Screen Australia workshops in November 2019 and February 2020. As part of this, they pitched to SBS and were announced in April as one of three winning projects to share in $65,000 of development funding.

Here is the synopsis announced by Screen Australia:

Freewheelers: A 6 x 12 minute adventure comedy centred on Abe Walker, a teenager with cerebral palsy, his terminally ill grandmother Jude and his best friend Sally. In a bid to establish Abe’s independence, they concoct a plan to exchange thousands of cans for the cash needed to get him to school camp. But what starts as a simple journey to the local recycling centre, becomes a last hurrah to remember.

Speaking to Screenhub last week, Dean and Dash were getting ready for their writers room later that week, a virtual one of course, held via Zoom. The four-day room would consist of the two of them, along with script editor Joan Sauers, writer Alice Addison, consultant Todd Winther, and note-taker Sean Walker. This was to be the first virtual writers room for all of them and they were still working out the technicalities, including what to do about a whiteboard function.

Speaking to us via Zoom too, Dash and Dean had an obvious rapport and deep respect, making way for each other’s points. This respect and openness was key for Dash in agreeing to work with Dean. ‘I’m quite a direct individual, and I pull no punches,’ she said. This proved to be the case in her tempering of the producer’s initial character ideas.

‘When I first started talking to Emily my perspective on disability was somewhat limited of course,’ Dean said, ‘and Emily just set me straight on so many things and I really appreciated that. It’s really benefited the story overall.’

Asked to give examples of this in practice, Dean said one simple example at the beginning was the name of the show, ‘Abel’, to reflect his ability despite disability. ‘Emily was just like, “NO”! And that was okay, fair enough.’

Another key change was Dean initially wanted one of Abe’s goals to include financing a new piece of equipment to support his mobility. ‘And again, Emily just pulled it away from that, from it being a story about a character whose goals were all about their disability, and more towards something universally teenage, like wanting to go to a school camp and have independence from his parents.’

‘It really is about making the specific universal, and the universal specific,’ added Dash. ‘Essentially all the work that I do focuses around creating good characters with disability. That may not be the main element of it – and in fact I try to stay away from things that are exclusively about disability – but that perspective is always really important to me to get right. So I was really excited by these characters Belinda brought to me. One of them has a disability, but he’s entrepreneurial, and active and high-achieving, which I thought was a really important message for audiences, and especially teenage audiences, because growing up, I didn’t have those kinds of narratives, and myself and other artists with disability often talk about how the absence of seeing those stories can really impact you. I thought this was a really great step in the right direction.’

Dash said it’s important for able-bodied people not to feel intimidated. ‘The politics around representation is such a minefield around who can tell what stories, and how and why, and I think while all those issues are important to be aware of, it’s important not to alienate people. So I’m open to working with able-bodied artists to tell stories about disability, as long as they’re willing to break it apart and be honest about their intentions and what they don’t know.’

‘I’m open to working with able-bodied artists to tell stories about disability, as long as they’re willing to break it apart and be honest about their intentions and what they don’t know.’  – Emily Dash

Finding the right people and getting real perspectives of disability in the writers room extends beyond Dash. Todd Winther is there to give the perspective of what it’s like to be a teenaged boy with disability. ‘I know a lot of people who could potentially be in that room,’ said Dash, ‘but we had quite a rigorous interview process to make sure that we found exactly the right person.’

A virtual writers room has actually opened up that potential for the Queensland-based Winther, and it’s interesting to think about how this time of isolation and digital dependency might open up a whole new raft of opportunities for remote writers rooms to include people with mobility issues – geographical or disability-wise.

As for what’s next, Dean said the development funding primarily goes towards running the paid four-day writers room, and then Dash will be paid spend the next two months writing a first draft. ‘The three projects going through this Digital Originals initiative are all hosting writers rooms and delivering drafts of the first two episodes. I guess the idea is that SBS want to take on at least one of them into production this year, and then see if there’s space for the others next year. There’s every possibility we won’t make it through but I hope that we do a good enough job on delivering a compelling story that they want to keep working with us into more development and production!’

Dash says her biggest challenge is to narrow down ideas. ‘What I love about writing is making really three dimensional characters. The hardest thing for me –  last year I wrote a play called Free Fall which is all about grief and loss and relationships and sexuality and disability and mental health. A lot of big ideas! And Freewheelers is about really streamlining what I want to say with this particular project. What’s exciting about the short form for me is it will force me to crystallise my ideas in a way that doesn’t lose any of that richness.’

Top Tip for Virtual Writers Rooms: Put up your hand!

Following up this interview, Dean emailed through this update on how the virtual writers room worked out in its first days. In short, very well indeed:

‘If anything I am surprised at how effective it has been and that very little of the energy you see in a typical writers room has changed. Joan Sauers, our script editor, has been keeping track of the overall on a whiteboard at her place, and we are relying quite heavily on the notes coming through each night from Sean Walker, our note taker, to ensure that we all have a solid recap of the day, but overall the communication and flow has been great. I anticipated that we might use a digital whiteboard, but sometimes using new technologies can slow things up and so we decided against it. The biggest ‘tool’ that we are using, is just putting your hand up to speak next if you have an idea. So we’ve all gone back to school again!!’

Read more: What happens when the writers room goes remote?