What We’re Watching: Apocalypse in July

The second lockdown may have dampened the spirits of our Melbourne office, but it has had quite the opposite effect on our enthusiasm for film and TV.
Jini Maxwell 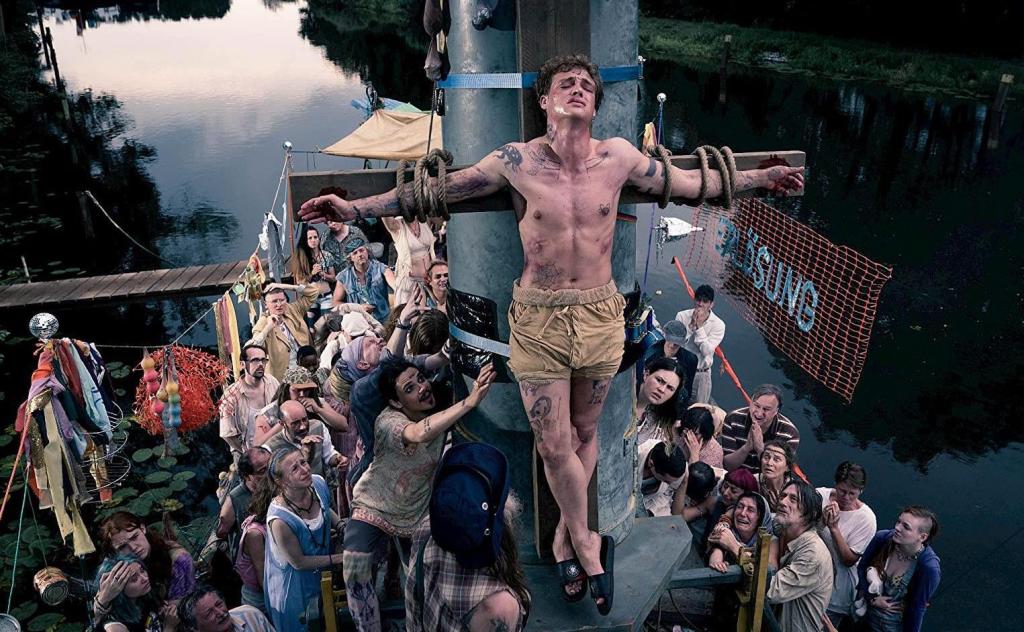 ‘8 Days’ on SBS on Demand details the surreal 8 days of revelry, violence, and bureaucracy before a meteorite is scheduled to destroy all of Europe.

Another winter month, another Melbourne lockdown — and the grimness of the season is definitely starting to reflect in the office’s viewing choices. Whether you’re looking for the latest in Scandi noir, a character driven drama featuring celestial apocalypse, or a screwball comedy to keep your mind off things, we have the recommendations for you, all currently streaming to your screens or earbuds in Australia. Let’s start light, because the recommendations get dark pretty quickly!

First up we have a chaotic lockdown comedy that has totally won our Business Development Manager Danni Petkovic’s heart: Mythic Quest: Raven’s Banquet. Streaming on Apple TV, the comedy is set in a game development studio. The series features some names who will be very familiar to the kinds of enthusiastic nerd who want to watch a comedy about game dev (which I say with love), including Rob McElhenny from It’s Always Sunny in Philadelphia, Community’s Danny Pudi, and Ashly Burch, a voice actor who worked on Life is Strange, Borderlands, Horizon Zero Dawn, and later wrote for Adventure Time. The show is relatable, chaotic, funny — and relevant to the present moment, featuring a lockdown episode filmed via video conferencing. Danni describes it as ‘art imitating life. Or actually, life imitating art!?’

Gina Fairley, National Visual Arts Editor for Artshub, has been hanging out for a second season of Das Boot, and it didn’t disappoint: ‘Das Boot is far more than a briny bloke flick; it is gutsy intellectual TV that leaves one pondering how much sits between the pages of history.’
The German series is currently streaming on SBS on Demand, and Gina’s already looking forward to season three: ‘Even though some of the main characters were “bumped off” quickly, it left one grabbing their device to search for the next release date.’ Apparently 2021 is the year to watch.

It’s always Bong Joon-ho season in the Artshub and Screenhub offices, and Memberships & Classifieds Growth Officer Gemma Eades has been getting in the spirit with the series remake of Snowpiercer, which is now streaming on Netflix.
‘I’m not too sure if watching a post-apocalyptic series right now is morbid, but I find myself waiting for each week’s episode release! Perhaps the politics and class injustice that the show centres on is just too relevant for these times that we live in. I would recommend it for anyone who doesn’t mind a bit of violence and survival warfare.’

On top of binging office favourite High Fidelity, Artshub Content direct George Dunford has been switching off the screens in favourite of the power of sound: ‘ahead of Audiocraft Podcast Festival, I’m catching up with a few great podcasts — including the Forest 404 which describes itself as an environmental thriller.’ Scored by lush soundscapes courtesy of British electronic music producer Bonobo, the series is set to shock and awe. George says, ‘as well as the main series, there are “companion episodes” that look at some of the science behind each episode. So, when you tune in, you might get a chat with an anthropologist about human extinction, or about what happens to our digital identities after we die. Cheery stuff!’
Sounds like perfect listening for the apocalypse.

Our Business Analyst Lachlan Richardson has also been leaning into the apocalypse vibe. He has been watching 8 Days with his partner, Clare, who describes this contemporary German take on apocalypse media like so: ‘Beneath the impact zone of Meteorite Horus, central Europeans attempt to flee east or embrace hedonism in their remaining days left. Rife with government corruption, bureaucracy, and botched bunker constructions, a lot ensues for space within.’ The ten episodes follow the eight days before the meteorite hits, depicting martial law in Berlin to the dark orchestral composition of David Reichelt.

If you loved The Bridge and The Killing, our fearless Head of Business Development Jane Chisolm has the next Scandinavian Noir you should binge: DNA. Jane praised the cast of this riveting, dark, drama, as well as the gripping storyline: ‘DNA follows Rolf Larsen, an investigator at Vestegnens Police, whose own eight month old baby is taken while he is on a case searching for an abducted child.’

As you can imagine, this story of a man who won’t give up the search is grim, gritty– and what he discovers over the years of his search for his daughter is shocking. Perfect viewing for cold winter days.

But on the other hand, if your approach to disaster is less violence and more valentines, you could consider joining Screenhub Journalist Rochelle Siemienowicz in watching Love Life on Stan, starring Anna Kendrick. Rochelle describes it as ‘a romantic drama tracing all the loves in a young woman’s life on the way to her finding The One. It’s smart, sweet, surprising and moving, especially in its depiction of her non romantic loves with her best friend and mother (Hope Davis in an unforgettable performance), and in the way it depicts her career struggles.’

Personally, I’m also picking romcoms over armageddon. My pick this month is Top End Wedding, which is now streaming on Netflix. From the makers of The Sapphires, this perfect popcorn flick won our hearts on the silver screen last year, and now it’s available in our living rooms. As a film, it’s bright and beautiful, and Miranda Tapsell, who starred in and co-wrote the film, is totally magnetic. Despite its joyful romcom bent, the film looks at the complexities of family and culture with clear eyes. It’s a  nuanced, heartfelt piece of storytelling.