Three decades have passed since Romper Stomper exploded onto screens – have our attitudes towards it changed?
Ben Volchok 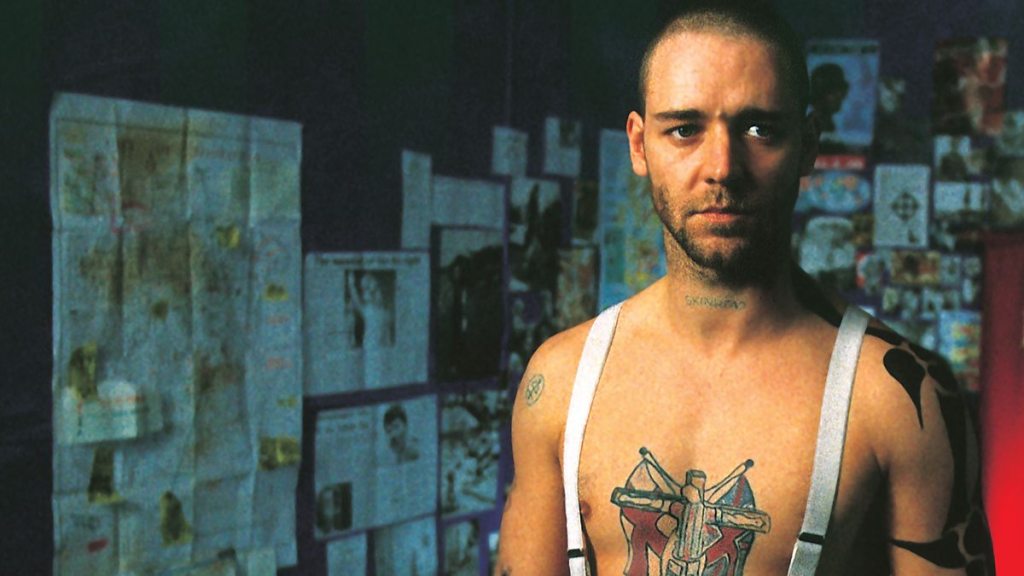 ‘We came to wreck everything, and ruin your life‘

Unapologetic and electric, Geoffrey Wright’s Romper Stomper burst onto the cinematic landscape in 1992. Centred on a gang of young neo-Nazis headed up by the intense Hando (played arrestingly by Russell Crowe), the film plays out their angst, their various entanglements, and, inevitably, their violent downfall.

It’s fast-moving, deeply provocative and shines a dramatic light on a part of society we tend to hope doesn’t exist but which, with its own frail grotesquery, continues to flourish in hatred. Indeed, it’s hard to think of an Australian film since that has graced our screens with such uncomfortable potency.

Reactions upon the film’s release were as polarised as you might expect. David Stratton infamously refused to rate it, the Anti-Nazi League in London protested its screening there, and even a young, pre-literary-debut Christos Tsiolkas eviscerated it in a 1993 article, calling it ‘an ideological mess’.

There were worries it would influence real-world fascist activity, or even just encourage your regular old violence that you see on the street. It was condemned as sensationalist, exploitative, misguided and dangerous. At the same time, the film was nominated for and won a number of AACTAs (including Best Actor for Russell Crowe and Best Score for John Clifford White), and was a clear box office success, bumping out Strictly Ballroom on opening weekend.

Many other critics found it daring, powerful, thought-provoking, and horrifying (in a good way). Or, put more simply, while David Stratton abstained on a rating, Margaret Pomeranz gave it 4½ stars out of 5.

It would be impossible to address the legacy of the film 30 years on without mentioning the recent TV series sequel. Released in 2018, it saw an expansion of the themes and contexts depicted in the original film, exploring new directions and new stories, with even a handful of characters returning to continue their trajectories. In a way, the series answers the very question posed by this article: ‘What of Romper Stomper 30 years on?’

We see its internal world, a hyperrealistic yet pointedly dramatised abstraction of our own, continued all these years down the line. Some things have changed, some things haven’t. So I suppose what it’s really answering is the question, ‘What of Australia 30 years on?’ And we can point to all sorts of things: the way racialised polemic has shifted targets and tactics in recent decades; the way bigotry has become further entrenched and supported by certain sections of the media; and the sobering fact that, unfortunately, Nazis are still around.

But what, then, of Romper Stomper itself 30 years on, and the people involved in its production?

After writing and directing Romper Stomper, Geoffrey Wright went on to make several other films: Cherry Falls (2000) – the only one he didn’t also write – in America, and Metal Skin (1995) and Macbeth (2006) in Australia. After a hiatus, he resumed storytelling duties to bring back the Romper Stomper TV series, acting as an executive producer and script producer, co-writing the show, and directing the first two episodes. Joining Wright from the original are producers Daniel Scharf and Ian Pringle, and costume designer Anna Borghesi.

Two other personnel of the original film who returned to the TV series were cast members Dan Wyllie and John Brumpton, both since becoming staples of the Australian screen. Wyllie has been appearing in Australian classics like Muriel’s Wedding (1994), Chopper (2000), Animal Kingdom (2010) and even the CGI reboot of Bananas in Pyjamas.

Brumpton likewise has brought his characterful presence to such gems as Dance Me to My Song (2005), The Loved Ones (2009) and Pawno (2015), as well as four separate characters in Blue Heelers over the years. The two would also star together in Rolf De Heer’s Charlie’s Country (2013).

Also returning was Jacqueline McKenzie, who has continued to maintain a consistent screen presence in the intervening years, most notably the narrator and lead of superhero mystery series The 4400, and recently appearing in James Wan’s yesteryear horror film Malignant (2021).

The obvious runaway star of the piece was, of course, Russell Crowe. Romper Stomper was only his fifth feature film and an early lead showcase, following perhaps most notably a major role in Jocelyn Moorhouse’s Proof (1991). With a staunch, passionate intensity as the neo-Nazi gang leader Hando, he foreshadowed future hit roles such as Officer White in L.A. Confidential (1997), and Maximus in Gladiator (2000).

Sadly, the film’s second lead Daniel Pollock, who gave a challenging and layered performance, passed away prior to the film’s release. No doubt he would have seen a skyrocketing career were it not for his tragic end.

In a way, nothing at all has changed since the film’s release. The arguments of the film’s detractors remain overall similar, extending equally to the recent series. Even David Stratton in his docuseries A Cinematic Life maintains the position that while he appreciates the artistic talent involved, he cannot endorse the film’s moral angles.

Margaret Pomeranz, however, in the same series, continues to champion it. Indeed, Romper Stomper keeps on being revisited on its various anniversary milestones, as well as being released in a number of special physical editions along the way. Certainly the existence of the sequel series is in itself evidence that the film is far from forgotten.

Love it, loathe it, 30 years on Romper Stomper is firmly entrenched within the Australian film canon.