The LLICFF is a major international festival centrally focused on essential short films made by young people between the ages of 6 - 18, but as well, it includes The… 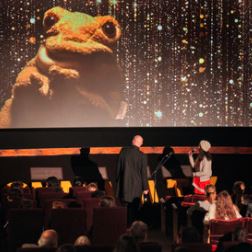 The LLICFF is a major international festival centrally focused on essential short films made by young people between the ages of 6 – 18, but as well, it includes The GOLDEN FLAME AWARD for professional filmmakers working with young people.

GRAND PRIX AWARD – As a unique film festival, it has quickly gained a reputation for its distinction in concentrating on films made by young people. So if you are 18 and under and you have made a short film get it in to us now. As well as the Grand Prix Award we have Best Animation, Best Performer, Best Documentary, Best New Wave and others. And unlike so many festivals, you do not have to pay per category, the one entry fee covers it all.

GOLDEN FLAME AWARD – An exciting and timely new category with the inaugural new award: LLICFF GOLDEN FLAME AWARD. This category is our only category for professional filmmakers, but only if you are a filmmaker working with young people helping them make films, and you are helping to give young people a voice that is inspirational and inclusive? The motto of the LLICFF is GIVING VOICE TO OUR CHILDREN FOR THEIR FUTURE, so if you are a filmmaker working in the industry with young people we want to hear from you. Gain recognition of your work – submit a short film to be eligible for the Golden Flame Award.

The next official festival will be in September 2022 when three days of International and Australian short films will be selected and screened, with prestigious awards given to the best film in various categories.

The LLICFF hosts stories from children in all cultures and from varying ways of life. This intercultural adventure encourages empathy and understanding, and we believe nothing does that better than the moving image, and in particular – films made through the eyes of the children themselves. LLICFF gives young filmmakers the opportunity to see their film projected onto the big screen. Get submitted for awards and be seen by professionals in the film industry. How exciting is that!

The festival also has a special regional focus with schools and individual young students encouraged to participate, a great opportunity for our own budding Yarra Ranges filmmakers.