Colortape International Film Festival is a multicultural film festival promoting worldwide arts & culture through films, while bridging cultural differences, friendship, showcasing the creative vision of filmmakers from over the… 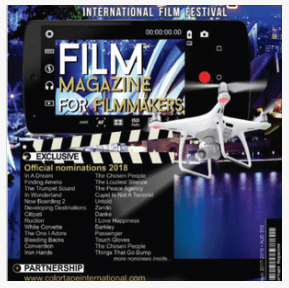 Colortape International Film Festival is a multicultural film festival promoting worldwide arts & culture through films, while bridging cultural differences, friendship, showcasing the creative vision of filmmakers from over the world. We are strong advocates and promoters of peace, love, friendship and mutual respect. One of very few festivals, if not the only one, to guaranteed acceptance, entry and certification for every filmmaker!
Over 4003 filmmakers were rewarded in the past 7 years!

Dedicated mainly for international entries who would like to showcase their work to the Australian audience. Offering a transparent and culturally un-biased selection. Opening the door to those who normally get rejected or are unfairly disqualified based on English language or difference in culture.

Local Australian filmmakers, based within our shores or outside can also participate.
We acknowledge that there are many more options available to local filmmakers, we noted in the past that many Australian films also do not get the right recognition and acceptance from local film festivals. Even if there are better quality films entered from overseas. We would still like to reward everyone for their hard work, and creative nature.

Colortape is a film competition and film festival offering an Indoor/Outdoor screening opportunity , to showcase filmmakers work, and reward everyone towards the end of the competitive season.

Colortape festival was nominated as one of the most prestigious and recognized film festivals in the Southern hemisphere & possibly being one of Asia-Pacific’s largest ” multicultural film competition by the number of annual admissions and soon to become one of the largest film screening event for the community for FREE in Australia.

In 2016, and 2017, 2018 nominated again for a 3rd year in a row for the “Access Community Services Cultural Diversity Award” by state government of Queensland, Regional Achievement and Community Awards.

Our festival endeavours to connect & bridge diverse cultural backgrounds from every corner of the world, whilst providing a sound platform for filmmakers to compete, showcase their work and be rewarded (recognition certified) at the same time, and offered an intimate festival where filmmakers and the audience can share & promote friendship and peace, engage the art of film and cinema

The awards will vary from year -to – year and usually takes place close to the end of the competitive season (December) each year. Email notification and digital certificates will be emailed, to reduce close contacts. Thank you for your understanding. Certified awards are guaranteed to MOST categories and submissions! PLEASE help us with with your reviews and crowdfunding initiatives if possible so we can reward as many possible filmmakers, animators, script writers, musicians, content creators like yourselves to get some sort of recognition for their works.