TV Review: The Unusual Suspects is authentic and refreshing

Light-hearted but not lightweight, this near-perfect heist drama refuses to gloss over the realities of class and race for Filipina-Australians.
Merryana Salem 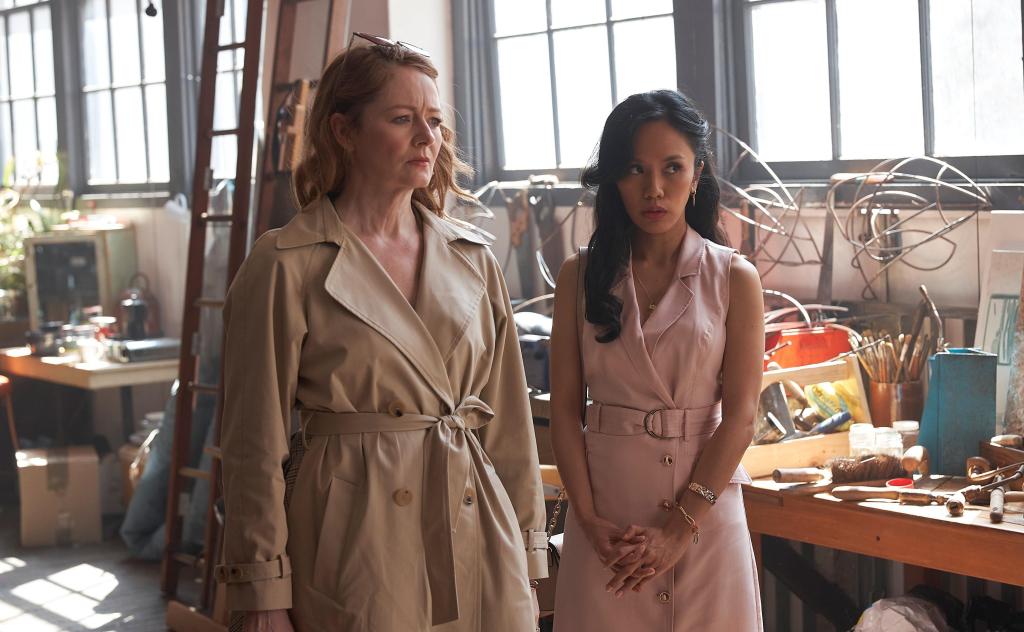 The rich bitch and the nanny. Miranda Otto and Aina Dumlao in The Unusual Suspects, courtesy of SBS.

Intersections of class, race, and the ethics of influencer culture, elevate a story about a jewellery heist gone awry in the four-part SBS Original series, The Unusual Suspects. The series proves that a perfect heist requires the perfect team, as much in its production as in its cast of characters.

Penned by Jessica Redenbach (Spirited, Rush), Roger Monk (Nowhere Boys, The Secret Life of Us) and co-writer Vonne Patiag, The Unusual Suspects opens with a tantalising glimpse of the future where a child’s birthday party is overrun by police called to the scene of a daylight robbery.  Emmy Award-winning director, Natalie Bailey (Run, Avenue 5, The Thick of It) and co-director, Melvin Montalban (Rope Burn, Cupid) handle the time-hops between past and future with a self-aware wit, as we cut from the cops arresting suspects at the party to the lavish home of Sara Beasley (Miranda Otto) where she’s doing a workout on the balcony, with Sydney’s Eastern suburb ocean views stretching beyond the horizon. The absurd contrast establishes the series’ major tenet: nothing is as it appears.

At first glance, Miranda Otto (Lord of the Rings, Chilling Adventures of Sabrina) revels in the out-of-touch churlishness of Sara Beasley. Sara is a rich career-mother, building a fortune via her highly manicured Instagram presence and a lifestyle website she’s about to sell to an American media giant. In reality, Sara’s freedom to be ‘goopier than Gwyneth and cooler than Kim’, as she puts it, relies on the relentless work behind the scenes of her Filipina nanny, Evie (Aina Dumlao). It’s a dichotomy common to the neighbourhood.

Sara’s neighbour, Filipina businesswoman Roxeanne Waters (Michelle Vergara Moore) depends on her friend and live-in cleaner, Amy (Lena Cruz) to help her run her household. Across the road, even Birdie (Heather Mitchell), an ex-lawyer set adrift in retirement, is quick to hire young Gigi (Susana Downes) as a live-in life coach. The Filipina women meet outside of work hours, their sense of community felt in the way the women take comfort in speaking rapid Filipino to one another safe from commands to speak english, sharing their reasons for tolerating the under-appreciated domestic work they perform. Their motivations range from retirement plans to escaping domestic abuse, reminding the viewer that upstairs and downstairs aren’t opposites so much as symbiotes.

Most memorable in The Unusual Suspects are the moments where the class and racial difference between the Filipina women characters and their white cohort are thrust into sharp relief. One stand-out moment is when Sara instructs Evie to go and pawn one of Sara’s designer bags for cash. When Evie declines to do so, Sara indignantly inquires why. Exasperated, Evie merely points to her own face and replies with a sigh, ‘They’ll think I stole it from my boss’.

It’s in these honest moments that The Unusual Suspects thrives where its women-driven caper predecessors – think Big Little Lies, or Ocean’s Eight – missed their mark. The Filipina women at the beating heart of the show aren’t there just to present a post-racial narrative. They are life coaches, nannies, cleaners and millionaire business women pushing the plot forward with determination, brilliance, and a whole lot of gossiping. Their difference is not post-racial decoration, but a dynamic reality brought to life through a humanising, humorous script that playfully refuses to gloss over the realities of class and race for Filipina-Australians.

Their difference is not post-racial decoration, but a dynamic reality brought to life through a humanising, humorous script that playfully refuses to gloss over the realities of class and race for Filipina-Australians.

With an infallibly authentic cast of women performing such a refreshingly specific script, The Unusual Suspect’s weakest moments fall squarely on the shoulders of the story’s men. Redenbach and co’s script delights a little too excessively in labouring the men’s incompetence to the point of predictability. Roxanne’s husband Jordan (Tony Leonard Moore), for example, has a fall from grace marred by drug use and temper tantrums so comical they border on parody. While it is hilarious, it’s almost as if Redenbach didn’t trust in her female leads’ abilities to be admired without the failsafe of comparison. Ultimately, however, male incompetence is just one factor empowering the women here.

Read: TV Review: Mare of Easttown gets the details right

Such a large ensemble tackling such nebulous social issues by way of a necklace heist is a precarious act to pull off, but one that the series executes with empathy, intelligence and an expert sense of humour. Produced by Angie Fielder and Polly Staniford of Aquarius Films (Lion, The Unlisted), this is a uniquely Australian, self-aware addition to the gallery of girl-power dramas. The Unusual Suspects‘ only crime is stealing the show.

THE UNUSUAL SUSPECTS
Created by Jessica Redenbach
Written by Jessica Redenbach, Roger Monk & Vonne Patiag
Produced by Angie Fielder & Polly Staniford
Directed by Natalie Bailey & Melvin Montalban
Airing on SBS on Thursday June 3, 8:30pm, with all 4 episodes streaming on SBS On Demand
Subtitled in Filipino, Simplified Chinese, Arabic, Vietnamese, Korean and Hindi and will be added to the subtitled collection on SBS On Demand. The series will also be available with audio description for audiences who are blind or vision impaired.

Merryana Salem (they/she) is a proud Wonnarua and Lebanese–Australian writer, critic, teacher and podcaster. Check out their podcast, GayV Club where they gush about LGBTIQ media, or find her on most social media as @akajustmerry.