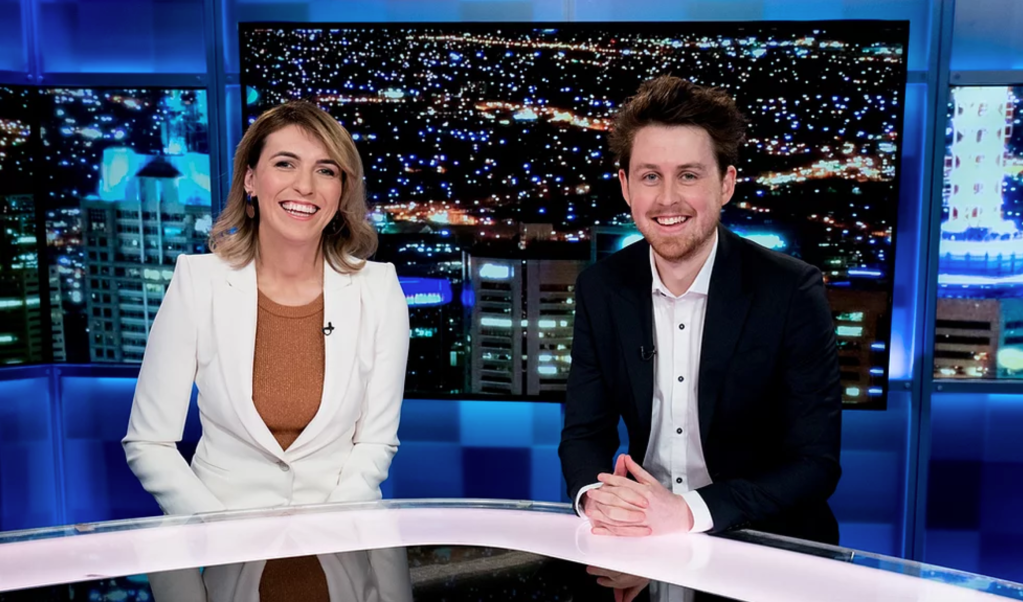 Melanie Bracewelll and Tim McDonald in The Cheap Seats

Producers Working Dog have been making the top-rating Have You Been Paying Attention? for close to a decade now, so they already have a finely honed machine built around finding silly news clips and making jokes about them. Add in a pair of hosts – New Zealander Melanie Bracewell and ‘from Jobseeker’ Tim McDonald – who first came to most people’s attention as panellists on that show, and you have as close to a sure thing as a spinoff gets.

It’s a fairly bare bones production. Two hosts, a vaguely important-looking desk, a couple of guest reporters in the second half hour. At a glance it looks like any one of a number of news-based comedy shows from the last few decades, with a format that’s almost as old as television itself.  If you’re familiar with HYBPA? you know exactly the style and tone of the jokes you’re going to get here. What you might not expect is just how many of those jokes you’re going to get.

For a while now, most Australian news-based comedy has been as much about the news as it is about comedy. Shows like The Weekly often provide a report on the news, then add a comedy twist at the end. That’s great if you’ve somehow missed the numerous regular news broadcasts on every single television channel and radio and social media, but not so much fun if you’re just looking to laugh.

In contrast, The Cheap Seats doesn’t particularly care about informing its audience; often a brief reference to a subject is all there’ll be before a string of clips featuring news hosts messing up, interview subjects saying stupid things, and people in general just being idiots. The clips are funny in themselves; the commentary on the clips is often just a bonus.

Bracewell and McDonald come across as people who can’t quite believe they’re hosting a TV show, which manages to be charming while also making their occasionally clumsy gags even funnier.

Bracewell and McDonald come across as people who can’t quite believe they’re hosting a TV show, which manages to be charming while also making their occasionally clumsy gags even funnier. The rapid-fire pace of the jokes (during the first half hour or so at least) is something of a safety net; there simply isn’t time for anything to go seriously wrong with so many clips to get through.

The guest reporters cover the traditional news comedy beats. Mel Tracina handles entertainment, which usually means bad reality television, Titus O’Reilly does sport and jokes about his old-timey outfits, and Natasha Exelby has been providing Olympics coverage and bonus banter. As segments go they’re fine, but they’re also the kind of lightly mocking coverage plenty of other shows have done before.

The real selling point here is an unusual one for an Australian comedy: The Cheap Seats works because there’s clearly been a lot of effort put into the comedy. Tightening budgets across the board have resulted in a focus on quiz shows and panel shows – the ABC currently has comedy quiz Win the Week, with panel news recap show Question Everything starting in August – where the guests can riff away on topics. Without top talent, the results can be hit and miss at best.

The Cheap Seats offers something different: decent news jokes and lots of them. Here’s hoping it becomes a regular fixture on our screens.