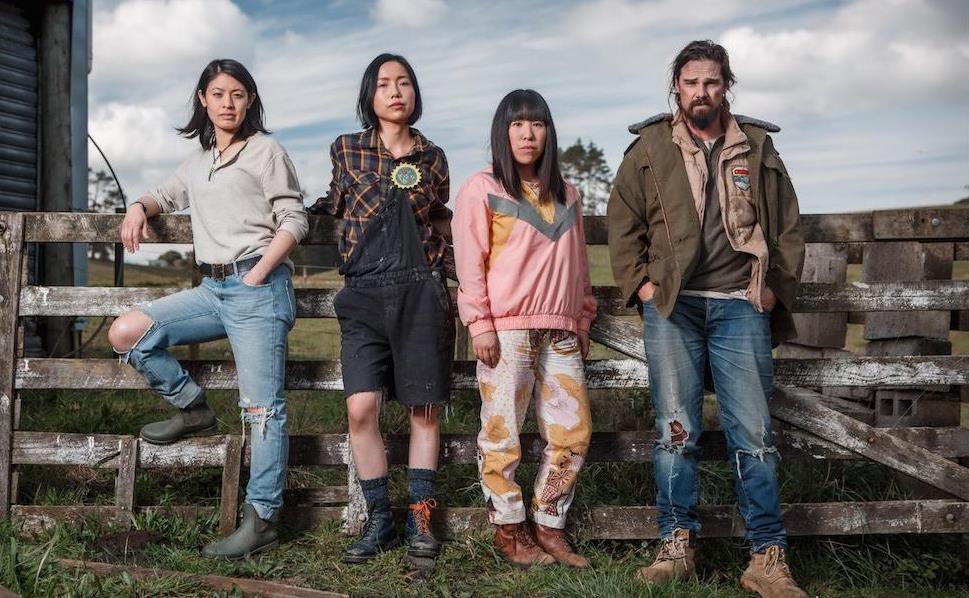 A mysterious virus has wiped out (almost) all men. Cast of Creamerie, courtesy SBS On Demand.

Kiwi-Asian comedians Roseanne Liang, Ally Xue, JJ Fong and Perlina Lau are known in New Zealand for their webseries Flat 3 and Friday Night Bites, which Liang directed, and Xue, Fong and Lau starred in. Their latest collaboration, the 30-minute, six-episode black comedy series Creamerie, first screened on TVNZ On Demand and has just premiered on SBS On Demand. And it takes place in what at first appears to be a feminist utopia: a near-future Aotearoa in which a mysterious virus (BROVID-19?) has wiped out all men.

Well, not all men. There’s at least one hunky survivor. Bobby (Jay Ryan) stumbles, eight years after the crisis, onto an organic dairy farm called Jackson’s Creamerie, to the shock of the three women who live there.

Their bucolic post-patriarchy is governed by Wellness, a personal development cult headed by GOOPy guru Lane (Tandi Ryan). Under its holistic regime, all women in Aotearoa enjoy weekly orgasms, free education and healthcare, and mandatory menstruation leave. And one of Creamerie’s strengths is the dynamic it sets up between its three androgynously named central characters, who are discontented with the new Well order in different ways.

Under [this] holistic regime, all women in Aotearoa enjoy weekly orgasms, free education and healthcare, and mandatory menstruation leave.

Jaime (Fong) desperately misses her dairy-farmer husband, the eponymous Jackson (Yoson An). Having lost her baby son to the virus, she yearns to have another child – which can only happen now via an IVF lottery using the fruits of New Zealand’s remaining sperm banks. According to the maernal Doc Harvey (Rachel House), Jaime’s got the perfect vulva for childbearing. And Bobby’s… gifts shouldn’t go to waste.

However, Jaime’s sarcastic sister-in-law, Jackson’s sister Alex (Xue), has an antagonistic relationship with authority – and particularly with Constance (Nikki Si’ulepa), the sexy cop who’s always arresting her and administering psychotropic ‘bliss ball’ implants. There’s certainly no love lost between Alex and Jamie’s best friend Pip (Lau), a rule-abiding doormat who believes earnestly in Wellness, where she works as a lowly receptionist but aspires to join ‘the Committee’.

I have to say that for most of the series I agreed with Alex’s assessment that Pip is a ‘fuckwit’. But the show also understands the deep loyalty that Jaime and Pip share; their old friendship works like a shared private language. The writing is very shrewd about the way those with the least power can exercise it most ruthlessly when they get a chance – and the show doesn’t let the tensions between Jaime, Alex and Pip resolve too easily with sentimental, confessional speeches.

I never found Creamerie laugh-out-loud funny, but I did enjoy its bleak wit. There are lots of fun little moments, like the overhead shot of Jaime disconsolately whipping a bowl of cream, next to which Pip triumphantly places a cup of semen. It’s like a viral recipe video for a bun in the oven. And the writing skewers the sinister side of self-help as a kind of Newspeak, in which dissidents are ‘unwell’ and need to be made ‘forever free’.

In perhaps my favourite episode, Liang and her creative team have a lot of fun with a tense pursuit at a menstruation festival, in which the Wellness cult’s overdetermined biological essentialism finds carnivalesque expression in a Ferris wheel called the ‘Cycle’, glossy red toffee apples, and a foam mascot menstrual cup called ‘Moonie’.

Creamerie has been compared to a genderflipped Handmaid’s Tale, but its intersectionality gives its social satire more bite. While Lane trades in multicultural visions of feminine ‘abundance’, those at the top of the Wellness organisation are mostly white ladies with flat-ironed hair, wearing wafty white outfits and driving zippy electric hatchbacks. Pip will always be an outsider here, no matter how fervently she subscribes to platitudes such as ‘There’s an “us” in every uterus!’

Creamerie has been compared to a genderflipped Handmaid’s Tale, but its intersectionality gives its social satire more bite.

Bobby’s presence on the farm sparks both resentment and fascination among the women in a way that recalls Sofia Coppola’s The Beguiled. Sometimes Liang frames Ryan’s body lustily, and sometimes with a sense of danger – and Bobby is keen to remind his hosts that he could overpower them in either way if he wanted. However, a late scene, thematically reminiscent of Ana Kokkinos’s film The Book of Revelation, is expertly handled to align audience sympathies with Bobby, and against Lane and her coven.

The plotting is surprisingly suspenseful, whipping up dollops of twists in every episode. There’s a mystery involving Alex’s mum (Helene Wong), Bobby’s search for other male survivors, and an almost feral hunter (Sara Wiseman) closing in on Bobby like a mix of Mad Max and the Terminator. (That’s not the only blockbuster movie reference in the series.) The sixth episode ends on a massive reveal that had me keen for more. Ultimately, this speculative treat is intellectually substantial – and emotionally satisfying.