Tomorrow, When the War Began

A genuinely exciting Australian action movie based on John Marsden’s best-selling Young Adult novel.
Richard Watts
[This is archived content and may not display in the originally intended format.] 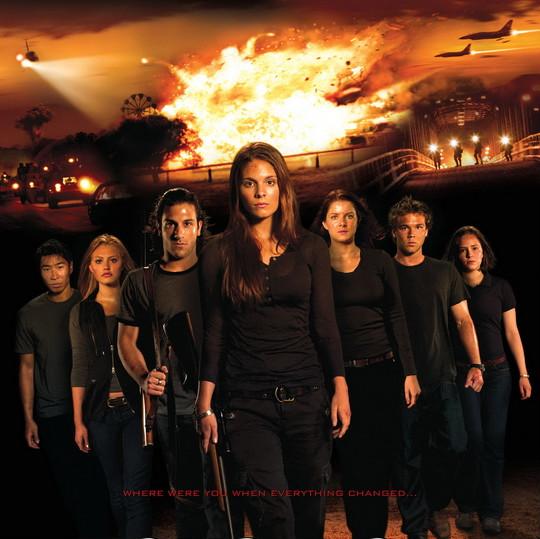 First published in 1993, teacher turned author John Marsden’s YA-adventure novel Tomorrow, When the War Began was very much the Harry Potter of its day; an international publishing success story that sold millions of copies world-wide, spawning six sequels and a spin-off trilogy in the process.

Immensely popular among teenaged readers, any adaptation of the book must naturally tread carefully in order to avoid alienating its legion of loyal fans, but screenwriter turned director Stuart Beattie (30 Days of Night, Pirates of the Caribbean, Australia) has done a generally sterling job in bringing Marsden’s much-loved novel to the screen.

Set in and around the small country town of Wirrawee (population 3871), the film follows the adventures of a suspiciously photogenic group of teenagers led by the resourceful Ellie Linton (Caitlin Stasey, Neighbours) as they head bush for a camping trip; coincidentally on the same weekend that Australia is invaded by a brutal occupying army. While their families are rounded up and imprisoned at the Wirrawee showgrounds, the teenagers – Greek bad boy Homer (Deniz Akdeniz), cocky jock Kevin (Lincoln Lewis), teen beauty queen Fiona (Phoebe Tonkin), reserved and studious Vietnamese-Australian Lee (Chris Pang) and the quietly devout Robyn (Ashleigh Cummings) spend an idyllic few days flirting in the remote bush.

When they emerge into a dramatically transformed world where foreign soldiers patrol the familiar streets of Wirrawee, they are quickly forced to grow up, and in a remarkably short space of time transform into a highly effective guerilla army who take the fight to the invaders, with drastic and dramatic consequences.

The film opens with Ellie recording the group’s experiences direct to camera via digital video – a logical updating of the book’s first person narrative, which saw Ellie writing down her story – though later sequences of voice-over narration are less successful, and occasionally intrusive. Thereafter we are quickly – and sometimes clumsily – introduced to the main characters, who at first seem little more than broadly-sketched stereotypes, but who gain unexpected depth and definition as the film unfolds.

Performances are uniformly strong, though Rachel Hurd-Wood is a trifle wooden as Ellie’s best friend Corrie, and Andy Ryan struggles as the stoner caricature, Chris. Conversely, Ashleigh Cummings as Robyn brings a steely resolve to her devoutly Christian character, admirably conveying the conflicted nature of someone who steadfastly believes in the Biblical commandment ‘Thou shalt not kill’ but who also finds herself living in the midst of a war.

Ben Notts’ lush cinematography occasionally veers into tourism territory as the camera swoops over the rugged terrain of the Blue Mountains, where the film was shot, but coupled with Marcus D’Arcy’s crisp editing, admirably captures the spectacle of Beattie’s screenplay, in which muted periods of character development alternate with tense action sequences.

A generally faithful adaptation of Marsden’s book, the film stamps its own mark on the story by playing up the violence which the novel generally avoided. It also unfortunately identifies the invading army, whose origins went unidentified in the original novel.

Beattie tries to avoid playing the race card by presenting the invaders as a coalition of nameless Asian nations, and while this tactic avoids demonising a specific country, it unfortunately also encourages alert viewers to consider the film as a contemporary expression of Australia’s deep-rooted xenophobia. Cleverly, Beattie softens the blow by acknowledging that this isn’t the first time Australia has been invaded, but the notion of an ‘Asian invasion’ is nonetheless an uncomfortable subtext of the film that must be acknowledged in any honest review.

Save for the occasional awkward slab of dialogue the script is solid, and the pacing is near-perfect once the film really gets underway. A clever nod to the challenges of adapting a much-loved book to the screen will entertain the more cynical viewer, while young audiences are sure to be entertained by the combination of an attractive cast and numerous spectacular set-pieces, including a dramatic rescue and subsequent car chase through the streets of Wirrawee.

Other flaws include a moment or two of poor CGI and an occasionally intrusive soundtrack, but for the most part Tomorrow When the War Began is a remarkably entertaining and genuinely exciting movie, rich with dramatic tension and truly spectacular. It deserves to do well at the box office both locally and internationally.

Tomorrow When the War Began opens nationally on Thursday September 2.