ABC: A love story about a man and his land and a man and his wife, this stirring telemovie starring Jimi Bani and Deborah Mailman is simply, eloquently and passionately told.
Richard Watts
[This is archived content and may not display in the originally intended format.] 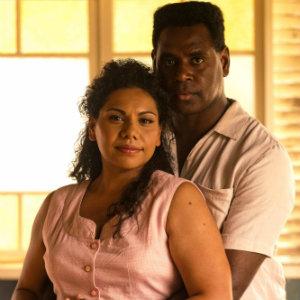 Not every Australian knows the story of Torres Strait Islander Eddie ‘Koiki’ Mabo, but they should.

A national hero, his long fight for legal recognition of traditional land rights culminated on June 3, 1992, when the High Court overturned the notion of terra nullius (i.e. the belief that Australia and its islands belonged to no-one when claimed by the British in 1770) in a landmark court case than now bears his name. Sadly, Eddie Mabo succumbed to cancer in January 1992, five months before the High Court decision was handed down.

Eloquently written by Sue Smith (Bastard Boys, Peaches) and more than capably directed by Arrernte/Kalkadoon woman Rachel Perkins (First Australians, Bran Nue Dae), Mabo tells Eddie Mabo’s story – not just his determined fight for justice, but also his long involvement with the Aboriginal rights movement in the 1970s, and his equally long involvement with Bonita, his wife, friend, and the great love of his life.

The telemovie opens with archival news footage from 1992, when various right wing pundits warned that the Mabo decision would spell the end of private home ownership in Australia. The voice of reason is also heard, in the form of then Prime Minister Paul Keating and his now-famous Redfern speech: “Mabo establishes a fundamental truth, and lays the basis for justice.” As opening credits go, it’s an excellent start – a powerful reminder of just how important the Mabo decision was, and of the scaremongering and shockwaves which rippled through Australian society in the wake of the High Court decision.

But first and foremost, Mabo is a personal story, not a political one. In the opening scenes, set in 1956, we meet the young Eddie Mabo (a revelatory performance from Jimi Bani (Belvoir’s Yibiyung, TV’s The Straits) as he unwillingly leaves his home, Mer (Murray Island) in the Torres Straits. Thereafter, in a succession of simply but cleanly told scenes, we trace Eddie’s career as a rail-worker in western Queensland, his work as a unionist, his early battles against racism – and his initial awkward meeting and subsequent romance with Bonita (Deborah Mailman).

The chemistry between Bani and Mailman is electric yet tender, and a key part of what makes this telemovie so successful. Even as the Mabo family struggle to stay afloat due to Eddie’s headstrong nature and single-mindedness, the sense of the powerful bond between Bonita and her husband is present in every scene. Equally clear is Eddie’s determination: “People like us have no choice but to be troublemakers,” he tells Bonita in a key scene, “because if we don’t, we don’t have any pride left.”

Archival footage also adds to the picture – and it’s not always a pretty one. It wasn’t that long ago that Aboriginal men were routinely refused service in pubs, and Aboriginal women were always served last in shops, as Mabo reminds us. The ugly nature of Queensland politics during the Bjelke-Petersen era is also evoked, thanks in part to a successfully skin-crawling performance by Rob Carlton as Paddy Killoran, Queensland’s loathed Administrator of Aboriginals (whose death in 2010 was ‘largely unlamented’ according to Radio National).

Other supporting cast members are equally strong – especially Ewen Leslie as barrister Bryan Keon-Cohen – and Sue Smith’s script successfully balances the legal struggles of Eddie and his team with the toll his battles take on him personally, and on his family. Instead of being either a dry court procedural or a family melodrama, Mabo successfully weaves the two genres together, so that the passion of Eddie and Bonita’s relationship and the tension of the unfolding court case support and compliment the opposing strands of the story. Director Rachel Perkins also knows when to emphasise the film’s emotional content and when to step away, so that the film never descends into melodrama or bathos but remains dignified and controlled at every turn.

Not every Australian knows the story of Murray Islander Eddie ‘Koiki’ Mabo, but they should. This fine telemovie will ensure that his story – and his victory – are known by many more.