Film Review: Rosemary’s Way is a small film with a big heart

Australia’s Local Hero of the Year Rosemary Kariuki is the centre of this emotional, intimate documentary that shines a light on Sydney’s migrant community, writes Glenn Dunks.
Glenn Dunks 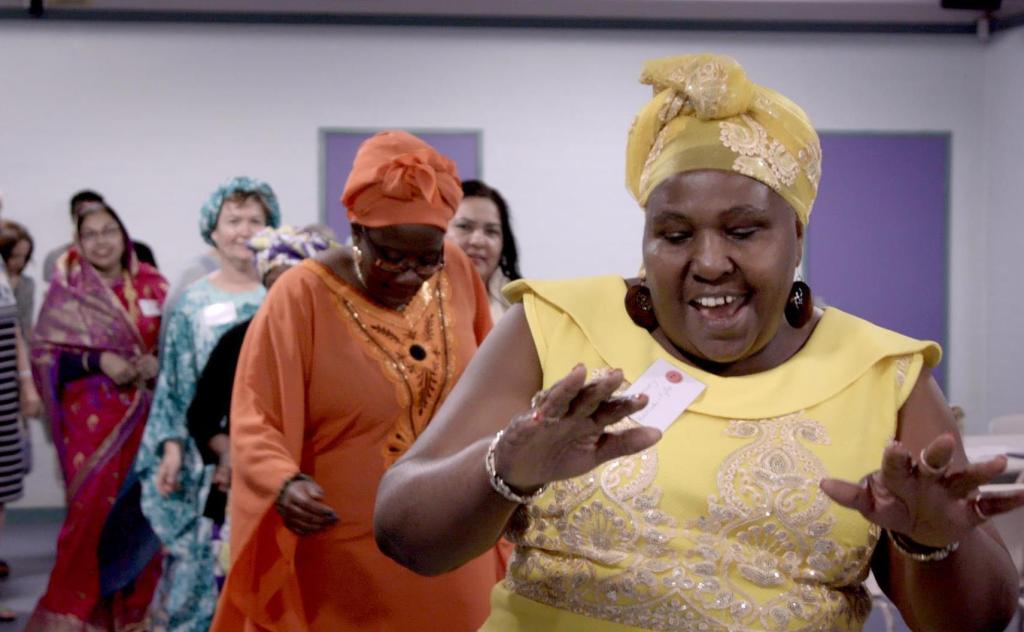 There is something so welcoming about the name Rosemary, don’t you think? Maybe it’s just me, but the name evokes sweet scents and friendliness. It sings in colour. It’s appropriate, then, for Rosemary Kariuki of Sydney’s western suburbs, a woman whose advocacy for migrant and refugee women, kindhearted nature, and fantastically colourful fashion is now immortalised in film.

Director Ros Horin’s portrait of this inner-city pillar, Rosemary’s Way, premiered at 2020’s virtual Sydney Film Festival as a contender in their prestigious $10,000 Documentary Australia Foundation Award. It was my personal favourite of the lot (the award ultimately went to Nays Baghai’s Descent).

Horin’s sublime and uplifting film has since travelled the world, including a screening at the Australian High Commission’s International Women’s Day event in Malaysia.

The documentary’s star Rosemary Kariuki is an impeccably charming woman from Kenya who escaped abuse and violence in her homeland to relocate in Australia. Recognising many of the same tell-tale signs of domestic and societal violence in other women in her new community, not to mention isolation and loneliness of marginalised immigrants, Kariuki has devoted herself to tearing down cultural silos for women of colour.

Horin’s sublime and uplifting film has since travelled the world, including a screening at the Australian High Commission’s International Women’s Day event in Malaysia.

Her energy appears to know no bounds. In its opening scene, Rosemary hosts a get-together in her home for women from across Africa, Asia, the Middle East and South America. They eat and share their national cuisines.

We follow as Rosemary partners with Parramatta Police to act as a community liaison, educating women from across the world on familial abuse, language barriers and financial distress. Later, she ventures to the Blue Mountains with a busload of her expanding circle of new friends, part of a cultural exchange with Australian nationals who host the women and their children in their homes and provide them the experience of the Australian bush.

While the film is small, [Rosemary] Kariuki’s heart is big enough to fill any void.

She visits home-bound women and those terrified to expand their world beyond the main shopping strips of Western Sydney, connecting scared migrant women to important disability and pension services. Perhaps most importantly, she organises the African Women’s Dinner Dance, a vibrant collage of colour, fashion and music. While Horin’s film is small, Kariuki’s heart is big enough to fill any void (including a cinema). Beyond having a film about her tireless work out now in cinemas, Kariuki was recently named Australian of the Year – Local Hero in the 2021 Australia Day honours.

This film, and Kariuki’s work more broadly, counters the racially charged media narrative that immigrants (particularly from the African diaspora) ‘fail to assimilate,’ highlighting the many ways that migrants are ostracised and isolated, as social safety nets are cut back, inequalities expand, and newcomers are confined to just a small number of postcodes.

Beyond Kariuki herself, many of the film’s most powerful scenes allow the camaraderie of African-Australian women to be the focus, as they tell of their hopes and dreams, as well as the distressing realities that usually go unrecognised, but which are imperative to understanding what forced them halfway around the world in the first place.

In many ways, this is a very intimate film brimming with secrets and untold emotions. It’s emotive and emotional, but never manipulative.

The documentary comes with pedigree, too. While this is only Horin’s second film as director following 2016’s The Baulkham Hills African Ladies Troupe, producer Pat Fiske has worked across some of Australia’s most exciting independent filmmaking. Pat Fiske previously directed some of this country’s best documentaries of 1980s in Rocking the Foundations and Australia Daze, and it is wonderful to see her take on more producing roles in Rosemary’s Way, and the upcoming feature debut of award-winning cinematographer Jane Castle, When the Camera Stopped Rolling.

While their work may appear modest, their ability to get up close with these women—many of whom don’t speak English as a first language—while offering them the space and the comfort to express their emotions, or share secrets, is a skill that often goes unrecognised in documentary filmmaking.

The film is lit exclusively with natural light, and the colours of these ladies’ national dress—all bright yellows, oranges, blues, and greens— Rosemary’s expressive smile and full-bodied laugh, are contrasted against Sydney’s suburban concrete with simple elegance.

It would be quite easy to dismiss the wholesome, heartwarming entertainment of a documentary like this as weightless trifle, when there are so many filmmakers around the world shining a light on the horrific racial abuses suffered by people of colour across the globe. But in an increasingly hostile media landscape, it is this wholehearted celebration of its subjects that gives Rosemary’s Way its impact. Hopefully a future release through SBS’s multicultural networks would also raise not just the film’s profile, but that of its incandescent star.