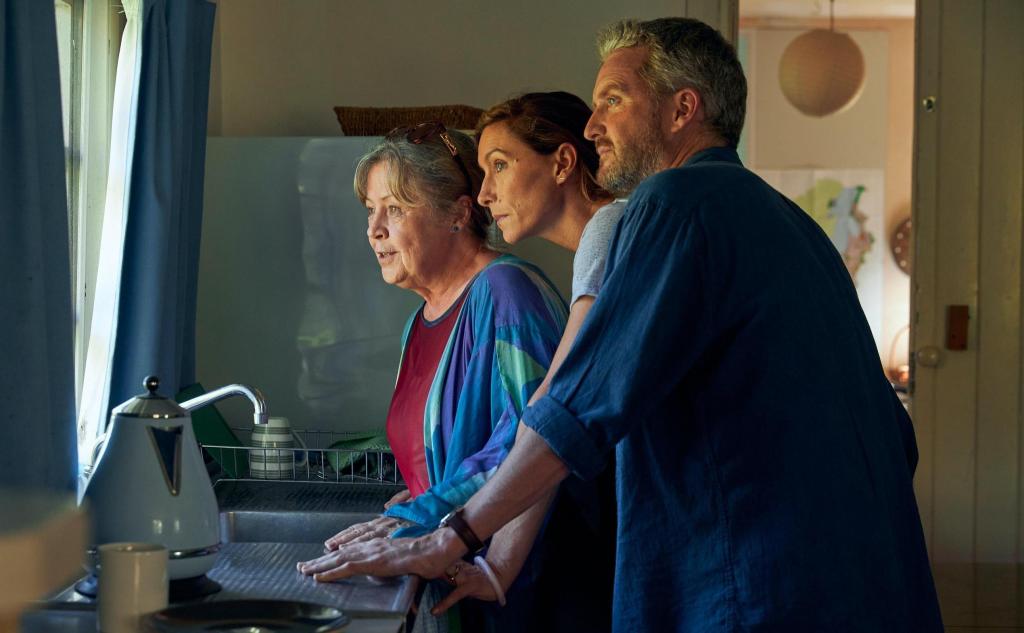 It’s been a fun year onscreen for Noni Hazlehurst; I’d call it a ‘Renonissance’ except she’s never really had any wilderness years. This year, though, she’s been a bawdy boomer in The End, a whimsical time-turner in Long Story Short – and now, in June Again, her signature warmth and capability lend both wit and pathos to a very familiar story about someone who gets an unexpected second chance.

The film opens as June Wilton (Hazlehurst) languishes in an aged care home on Sydney’s North Shore – a rather pleasant one, by the grim standards of such places, but nonetheless an institution of implacably stripped dignity. In a sequence cleverly assembled by Oscar-nominated editor Mark Warner (Driving Miss Daisy, Ladies in Black), we see how her vascular dementia, brought on by a series of strokes, makes her live through disorienting lacunae. Her daughter Ginny (Claudia Karvan) and grandson Piers (Otis Dhanji) are frequent visitors, but she no longer recognises them.

One night in bed, June is stricken by a horrible headache… then she wakes up seemingly herself again. Her doctor (Wayne Blair) is amazed that her memory is back and her aphasia is gone – she can now pass basic cognitive tests, as well as finishing crosswords and giving potted histories of everyone in a framed family photograph.

Trouble is, June’s memories are all five years old. She remembers Ginny as the manager of June’s successful hand-printed wallpaper business, and her son Devon (Stephen Curry) as a brilliant architecture student happily married to Tiffany (Chantelle Jamieson) – and there’s lots of humour in her blustering response to each new revelation.

The doctor warns that her newfound lucidity will only be temporary – which for June is all the more reason to escape the home’s patronising staff (Katrina Retallick and Uli Latukefu) with the help of a wily taxi driver (Steve Le Marquand). When she discovers what’s happened to her family since her stroke, June’s practical nature kicks in – she’ll right this ship.

Kiwi writer–director JJ Winlove is known for his short films, but makes his feature debut here. It’s impressively polished and focused, with characters more complex than in many Australian comedies. And while plenty of moments are genuinely funny and playful, the film is also serious about excavating what Winlove slowly reveals to be a suffocating matriarchal family dynamic.

…impressively polished and focused, with characters more complex than in many Australian comedies

The film is completely grounded within June’s point of view. We see her strong sense for aesthetics and her pleasure in her capabilities. One of the most delightful things about Hazlehurst’s performance as the lucid June is her self-possession, and the easy way she draws on a lifetime’s knowledge and connections. June’s formidable charm emphasises what a terrible loss of identity her dementia has caused.

But in the tradition of ‘do-over’ films, June belatedly realises, to her dismay, how overbearing she’s been. The film is quite smart about how June misreads Ginny’s creativity as timidity, believing Ginny is being steamrolled by her husband Kyle (Nash Edgerton) and the wallpaper company’s awful manager, David Spinner (Darren Gilshenan). Karvan’s trademark blend of warmth and nerves works well here, emphasising what Ginny shares with her mother, as well as how she differs.

Meanwhile, Devon turns out to want a very different life to the one that had made June happy. Early on, Stephen Curry seems comfortably in Dale Kerrigan mode – a hapless underachiever. But that’s only how he seems to June. And Curry – who’s shown he also has serious dramatic chops – is engaging as a sensitive man who finally learns to face his rage and shame.

I really enjoyed how the film portrays June’s subjectivity. Her happy memories of a transformative love affair creep in around the edges of her perception, as flashback sequences of young June (Matilda Ridgeway) and her lover, Danny (Sam Lyndon). But what they mean to each other doesn’t completely emerge until later in the film.

June Again offers an interesting comparison to Florian Zeller’s acclaimed The Father, which also folds the symptoms of dementia into its formal approach in a powerfully subjective way. The two films sometimes use similar techniques: for instance, Winlove, like Zeller, depicts the uncanniness of aphasia by substituting doppelgänger actors for Devon and Ginny.

But while The Father is a very spatially focused film – which perhaps recalls its stage origins – June Again is embedded within the mechanisms of genre. Winlove increasingly uses June’s starkly edited memory blackouts to raise emotional stakes: she loses her grip on the present at crucial moments when she’s just about to share something important. And June’s possessions and her favourite song are used to thread past and present, just as romantic movies frequently linger on such mementos to communicate cherished connections.

It might seem odd to call this a happy film when its protagonist is facing her inevitable return to a fugue state. But June Again captures something satisfying amid the bittersweet knowledge of life’s impermanence: that self-knowledge and care for others make it worth living.