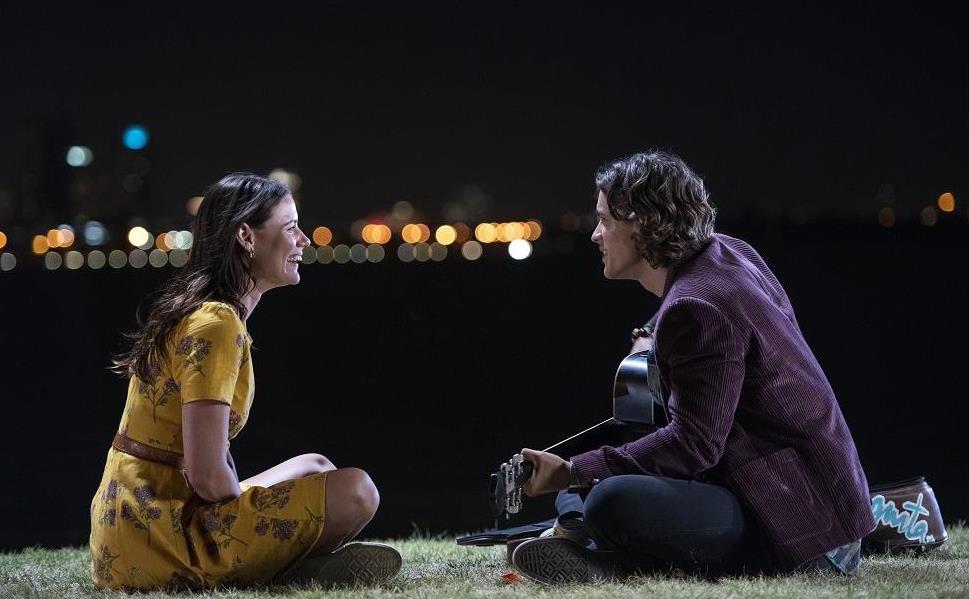 Lily Sullivan and Brenton Thwaites in I Met a Girl on Netflix.

Writer Glen Dolman (Bloom) and director Luke Eve (Cancelled) are passionate about telling stories exploring the experience of mental illness. They co-created Low Life, the 2014 black comedy series about depression, and its 2017 follow-up High Life, which tackled bipolar disorder. Eve is currently developing Mid Life, a project about a middle-aged artist in the grip of acute anxiety.

Here, they use the structure of a Manic Pixie Dream Girl rom-com to tell a story about love and schizophrenia. Devon Cassidy (Brenton Thwaites) is a good-looking Perth lad, and a talented singer-songwriter. He’s also been hearing voices since he was 12: the cartoon superhero Mr Rocket (Peter Rowsthorn), who encourages him into reckless acts; and the nightmarish nurse Miss Needles (Anni Finsterer), who hisses that he’s worthless.

Their voices are in Devon’s ear as he gives a speech at the wedding of his older brother Nick (Joel Jackson) to Olivia (Zahra Newman). Any student of romantic comedy knows that when a film opens with a wedding, mishaps swiftly ensue; so it is with Devon, who goes off-meds and off-book while performing with his band. Back to hospital he goes…

Five years later, Devon dwells in a liminal world. He’s living with Nick and Liv because he’s not well enough to hold down a job or live alone – he can’t even shower without Nick literally holding his hand. But Nick and Liv, who are now expecting their first child, can’t cope with Devon much longer. Shunned by his former bandmates, and goaded by Mr Rocket and Miss Needles, Devon goes off the edge…

Then he wakes in a bathtub, having been rescued by a beautiful, free-spirited stranger, Lucy (Lily Sullivan). Over one giddy day and night, Devon and Lucy hang out flirtatiously, dine and dash at a posh seafood restaurant, enjoy an impromptu park serenade, and tumble into bed. He wakes up next morning to a note from Lucy, telling him to come and find her in Sydney.

At this point, I was finding the film much too irritating to be invested in its budding romance. Lucy seems too obviously an invented fantasy woman, a figment of Devon’s schizophrenic imagination. And while the increasingly harassed Nick, and Devon’s kindly psychiatrist Patricia (Anita Hegh), indulge his lovestruck talk about Lucy, they underestimate the power of his emotions, which send him on a cross-country quest from Perth to Sydney in search of Lucy.

In the central role, Thwaites is well-cast. He’s best known for what I can only call ingénu roles in films including Maleficent, Gods of Egypt and Pirates of the Caribbean: Dead Men Tell No Tales. But at 31, he’s starting to age out of playing wide-eyed young doofuses – which, in this film, underlines that Devon’s illness has long since lost its puppyish quirk factor, and is now just self-destructive.

With a sense of mounting frustration I watched Devon set out for Sydney, unmedicated and under-resourced, harried by his voices and lured by surreal visions of Lucy’s encouragement. Eve directs this adventure with too light a touch for Devon ever to seem seriously in danger; he coasts on luck, charm, and the help of various Aussie oddballs. But back home in Perth, Nick and Liv don’t know this. They’re at breaking point – and it’s Nick’s realist despair, not Devon’s magic-realist romance, that is the more compelling narrative.

The tension between an unwell protagonist’s inner and outer worlds animates any film about mental illness: is the film seeking to convey how it feels to experience the world while schizophrenic, or are we being invited to empathise with those who love a schizophrenic person?

The tension between an unwell protagonist’s inner and outer worlds animates any film about mental illness: is the film seeking to convey how it feels to experience the world while schizophrenic, or are we being invited to empathise with those who love a schizophrenic person, but who can’t see the world as they do? Last year’s refreshingly eloquent Words on Bathroom Walls used the teen-angst romantic melodrama genre effectively as a way through this labyrinth of inexpressible emotion. I Met A Girl is less successful because the ‘crazy-in-love’ tropes it uses are so familiar as to make Devon seem pathetically, clinically deluded.

Only towards the end of the film does a much cleverer and more rewarding narrative emerge in flashback. I wished Dolman and Eve had woven this in earlier, and pushed Devon’s hallucinations further from literalism – perhaps using the kinds of disorienting perspective shifts that made Florian Zeller’s The Father such a powerfully subjective examination of mental breakdown.

Ultimately, I Met A Girl never really succeeds in the project of bringing the viewer inside Devon’s head. Whether Lucy is ‘real’ is a McGuffin, because the film’s true love is between two brothers: Devon feels so intensely that he can’t cope alone; and Nick sacrifices his own happiness out of an equally intense loyalty. Only when their co-dependent love resolves and stabilises can they really be present with the girls they’ve met.