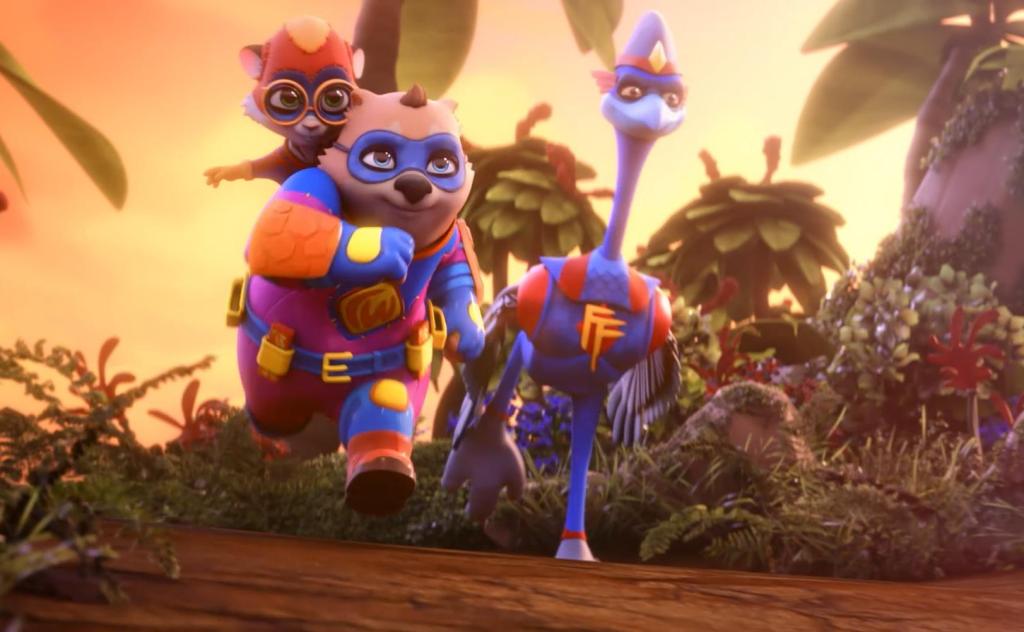 Combat Wombat is a fresh action-packed family animation portraying the journey of reluctant wombat turned ‘Wonder Woman’, Maggie Diggins, and her trusted Sugar-Glider sidekick, Sweetie. Produced in Brisbane by local animation company Like A Photon Creative, the film is an instalment in the exciting and ecologically rich universe of ‘The Tales Of Sanctuary City’ franchise. Screening at the Brisbane International Film Festival before its general release, the film takes its audience on a wild and unconventionally funny adventure without skipping a beat.

Maggie Diggins (voiced  by the wonderful Deborah Mailman) loses her husband Bradley Burrows (George Pullar) in a mining accident. After the local law agency, the Sanctuary City Pawlice Department, gives up on looking for her missing husband, Maggie agrees to hesitantly work with Sweetie, a super-hero obsessed, young sugar glider (voiced by Ed Oxenbould) and turns into a superhero so she can find her beloved.

As the plot progresses, the film smartly intertwines several subplots and arcs to create a dynamic experience for its audience. Using humour and music, the narrative is always entertaining, while vividly delving into wholesome themes that include the appreciating biodiversity and the importance of kindness, compassion, community, and open communication.

My personal favourite aspect of Combat Wombat was its portrayal of the lead character. Although animated, Maggie Diggins is a middle-aged female who normalises the existence of a non-skinny, non-muscled character and doesn’t bother with changing her body to fit societal expectations of what a superhero should look like.

Knowing it was Deborah Mailman voicing Maggie was exciting and heart-warming, underlining the fact that that it’s rare for a lead animated character to be voiced by a person colour, and even more inspiring when that person is a Blak woman. Maggie Diggins has a significantly different accent to the rest of the cast, which only serves to normalise Indigenous voices on the big screen.

Another successful element of Combat Wombat is the way it addresses death, grief and loss. Without spoilers, it deals with those themes with maturity, allowing viewers of different emotional capacities to cope.

The producers, Nadine Bates and Kristen Souvlis, and director Richard Cusso, have previously directed another of Tales of the Sanctuary City films, The Wishmas Tree, which similarly featured an Indigenous lead in Miranda Tapsell. Here they have woven a powerful story of female empowerment, with writer Matthew James Kinmonth daring to address a wide range of themes.

Although animated, Maggie Diggins is a middle-aged female who normalises the existence of a non-skinny, non-muscled character who doesn’t bother with changing her body to fit societal expectations of what a superhero should look like.

Combat Wombat’s rich use of puns and humour occurs without being too cheesy or misplaced, and often aids the progress of the plot. The film also highlights the roles of two other secondary characters, played by Judith Lucy and Frank Woodley, without making the fore-shadowing too overbearing.

While Combat Wombat is definitely packaged as a work for children, it works to entertain and educate viewers of all ages. I’m thoroughly excited about what the producers and artists involved might have in store for future titles in the series, as this one paves a much-needed path for diverse voices to be a part of mainstream entertainment.

Naavikaran is an all-round goddess in the form of a multi-gender trans woman, badass entrepreneur, community educator, writer, organiser and choreographer from India, based in Meanjin (Brisbane). Their work aims to create platforms for storytelling that is accessible and safe for identities of various intersections and communities.    Naavikaran was named as one of the 30 Under 30 LGBTIQ+ Leaders in Australia by Out For Australia in 2019 for their contributions to the community. As a theatre producer and performer they starred in The Neighbourhood by La Boite Theatre Company, Future Ancestors by Metro Arts Theatre and Tales From The Colony by The Skin Deep Collective.    Naavikaran is the founder of 'ruhmantic', a royal chai brand and experience that is aimed to support artists and storytellers of colour. Their latest track 'The Closet' and 'Mansion of Grace' can be found on all streaming platforms, but especially Spotify.    Naavikaran’s pronouns are she/they.