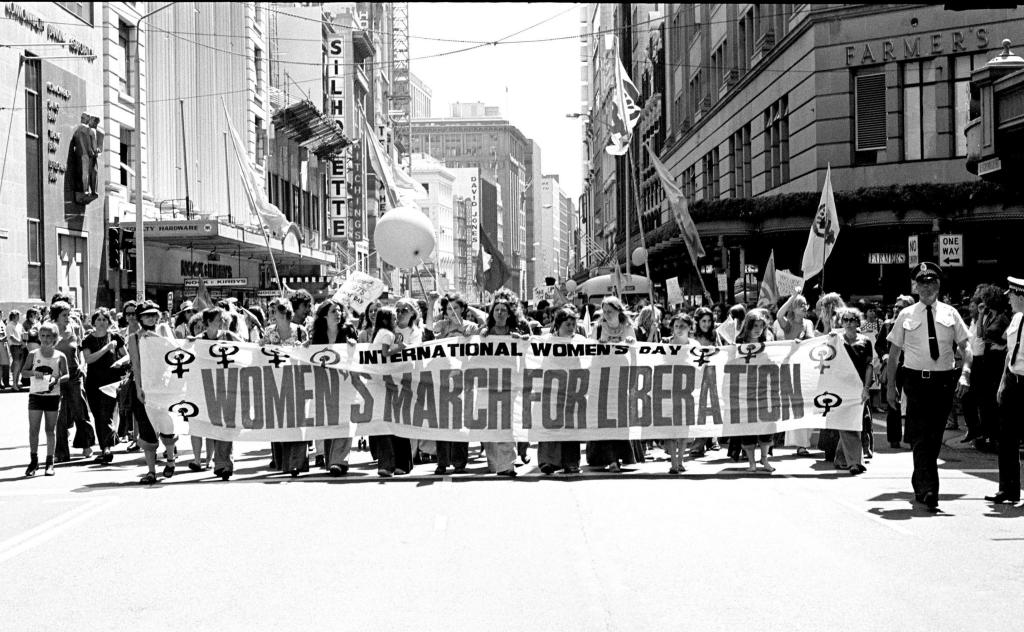 She heads a creative team of talented women. Produced by Philippa Campey (The Leunig Fragments) and Andrea Foxworthy (On Her Shoulders) and executive-produced and distributed by Sue Maslin (The Dressmaker), Brazen Hussies boasts cinematography by Anna Howard (Women He’s Undressed), Erika Addis (Shooting Women) and Sky Davies (Retrograde); a soundtrack by former Go-Betweens member Amanda Brown (Babyteeth) and sound design by Emma Bortignon (Retrograde); and animation by Juliet Miranda Rowe (I Am No Bird).
Editor Rosie Jones (The Family) beautifully assembles archival material and interviews. The film’s strength is the richness of its vault: more than 4000 still photographs, posters and feminist publications, along with over 800 clips from news footage, documentaries and personal collections. Alongside these lively visuals, more than 25 activists tell their stories.

Read: Sue Maslin and The Dressmaker: the business case for gender equity

It’s heartening to see these wise, lived-in faces relishing their youthful ratbaggery. We hear author Kate Jennings’ incendiary speech at a 1970 Sydney University moratorium rally, and see the instant pushback from the leftist men who should have been her comrades. Experimental filmmakers Robin Laurie and Margot Nash clearly delight in freaking out male anarchists. And there are bucolic scenes at Amazon Acres, the women-only rural retreat founded by lesbian novelist and historian Kerryn Higgs. (Not even male babies allowed.)

Brazen Hussies celebrates milestones in Australian feminist activism, such as Merle Thornton’s 1965 protest against women’s exclusion from public bars, and the 1969 equal-pay protests by Zelda D’Aprano (shown here in interview before her death in 2018), Alva Geikie and Thelma Solomon. Some public actions could be cheeky, but they could also get ugly. Protesters crowd ACTU boss Bob Hawke after being excluded from a unionist conference. Cops throw women out of pubs and into divvy vans.

But for me, the most affecting scenes show the ‘consciousness-raising’ sessions, at first in private homes and then in public meeting halls, where women voiced what Betty Friedan called ‘the problem without a name’. To watch these earnest faces, and the attention of those listening, is to glimpse something tender and precious: the emergence of political purpose.

Consciousness-raising has a daggy reputation these days, but nevertheless, it persists – in every confessional essay, memoir, viral video or tweet in which a woman shares her anger and suffering. This was, as writer and editor Anne Summers points out here, a trust-building practice that helped women unlearn a lifetime’s conditioning to see each other as competitors.

The same discipline of listening stood Elizabeth Reid in good stead as the first ever women’s affairs advisor to government. From 1973 to 1975 she travelled Australia asking women what they wanted. The volume of her correspondence was second only to that of her boss, Gough Whitlam. Whitlam’s reforms – to family law, workplace conditions, maternal healthcare, domestic violence refuges, and a new single mothers’ pension – made powerful, material differences to Australian women and children.

But Reid was hounded by hostile media coverage, as prominent feminists had been, and still are belittled now. ‘It was designed, of course, to discourage other women from joining,’ observes film scholar Barbara Creed.

Watching, it’s easy to feel discouraged by feminism’s Sisyphean project. As a snippet of Julia Gillard’s ‘misogyny speech’ makes clear, patriarchy is as hostile now as in the 1960s – perhaps even more so, amplified by online abuse. Feminism still has not resolved the disagreement between liberal, reformist feminists and radical feminists who want to dismantle the system – egged on by journalists who love to referee catfights.

But Dwyer ends with hopeful contemporary footage. The struggle continues not with exclusionary animus, but with male allies cradling their children as they march; with white allies insisting Black Lives Matter; and with fierce young trans feminists owning their place in the movement. The future is brazen.