Film Review: Bloodshot Heart is Giallo all the Way 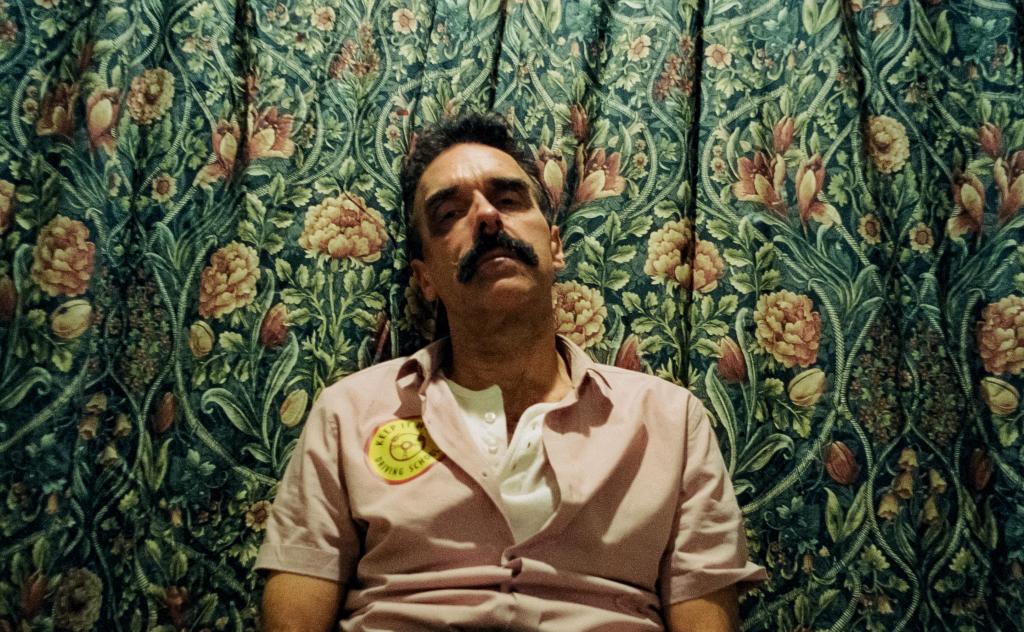 This review was originally published in July 2020, but republished for the film’s national release in May 2021.

At the 25-minute mark of Bloodshot Heart, something very odd happens. In the midst of a tense, domestic scene between Hans (Richard James Allen) and his mother Catherine (Dina Panozzo), the irritating buzz of a doorbell sounds insistently. Hans then confronts, at the front door, what he assumes to be the bullish ex-boyfriend of the home’s latest tenant, a delicate flower named Matilda (Emily David). A fight ensues, culminating in Hans accidentally punching his Mamma, and the intruder picking up a kitschy doorstop to whack Hans over the head before fleeing.

But wait! A meaningful look has just passed between Matilda and … a woman of her own age, wearing the same jacket as the belligerent guy we’ve just been watching in the tussle with Hans. What’s going on? Are there two visitors to the household? Did I miss spotting some crucial detail, some in-between shot?

No, this switcheroo is only a preview of far more wayward distortions of reality (and story) to come. Even the characters’ names start swirling around, because Matilda will later use Hans to help forge a new ID for herself as Sarah … and Sarah happens to be the name of a woman in Hans’ obscure past, often conjured in brightly coloured, grainy Super-8 beach shots reminiscent of the opening of Chantal Akerman’s The Captive (2000).

A great deal radiates out from this crucial scene in Bloodshot Heart. It’s a Freudian carnival of horrors: Hans hitting his mother is surely a secret act of wish fulfilment, while his perceptual substitution of a man for a woman springs from his own, somewhat twisted romantic and erotic fantasies. But also, as in the films of Brian De Palma or Dario Argento, perception becomes a recurring problem for us, the spectators, as well: we come to regularly doubt what we see, hear, infer and recall along the 90 minutes of the narrative. And then there’s the counter-narrative, the one that is not locked up inside Hans’ disturbed head: what’s Matilda’s story, exactly? What is she after, who is she running away from?

Bloodshot Heart is like the modern-day version of an Italian giallo horror-thriller from the 1960s or ‘70s. It has all the right ingredients: erotic obsession, colliding personal fantasies, vivid hallucination sequences, sick and twisted family relationships. Key aspects of the filmmaking exude a properly cosmopolitan aura – something achieved too rarely in Australian cinema. Susan Lumsdon’s superb cinematography, Matt Perrott’s sound design and Ola Turkiewicz’s evocative score (was I wrong to keep hearing the first four notes of Kraftwerk’s ‘Trans Europe Express’ in it?) lift the mundane, everyday spaces into a sinister, dreamlike realm. The editing by Shannon Michaelas soups up the psychedelic shocks at the best, most delirious moments.

But the specific mix of Italian and Australian is an especially important element in the vision of writer-director Parish Malfitano, an AFTRS graduate. He has undoubtedly woven traces from his own cultural background into this nightmarish phantasmagoria. Seeing, for instance, the wonderful Dina Panozzo make a meal of her role as Catherine will plunge some viewers back into memories of her vivid contribution to Monica Pellizzari’s films, Just Desserts (1993) and Fistful of Flies (1996). In fact, all the central actors do a good job of acting in a stylised (at moments literally dancelike) fashion, stopping short of grotesque exaggeration.

When it comes to a necessary touch of humour, Malfitano can no longer look to the giallo canon of Argento, Mario Bava or Umberto Lenzi for tutorial guidance. The genre, in its original form, is in fact often grimly leeched of fun ­– creating its effects of hysteria (in all senses) purely from deliberate stylistic overkill. (I will never forget a packed Cinémathèque française crowd laughing like crazy at every scene of Argento’s 1982 Tenebrae – while completely loving and honouring the film in that very gesture.) Bloodshot Heart takes a different path. There’s a line of suburban satire (it was filmed in New South Wales) summed up by the running jokes concerning Hans’ day job as a driving instructor for the ‘Keep It Wheel’ company, and the strange behaviour of Hans’ mates, a gruesome pair of blonde-haired brothers (heartily played by Peter-William Jamieson and Matt Lausch).

..the main aim is to whip up a kind of vertigo for the viewer in which the baseline of the story’s reality can never be taken for granted, where dream, memory and hallucination are utterly confused…

I have deliberately spelt out little of the plot in Bloodshot Heart, for the good reason that is better for viewers to discover the surprise twists and unexpected developments for themselves. It doesn’t give too much away to say that, to my eyes and ears at least, the most central influence on Malfitano and his collaborators is the British director Peter Strickland, himself a connoisseur of giallo, the maker of Berberian Sound Studio (2012) and The Duke of Burgundy (2014). As in his films, the main aim is to whip up a kind of vertigo for the viewer in which the baseline of the story’s reality can never be taken for granted, where dream, memory and hallucination are utterly confused – while, simultaneously, the material texture of everything from curtain fabric to pasta sauce becomes voluptuously, hideously palpable. The step from 1970s giallo to contemporary queer cinema turns out to be short and sweet.

So there comes a point where you will be either very glad to have ‘lost the plot’ of Bloodshot Heart, or very frustrated. In an interesting and essentially positive review, Bill Mousoulis comments: ‘The film didn’t leave me with much ultimately, in terms of any insights or deeper feelings, but this should be seen as a restriction of genre cinema, and not of this film itself’. He’s right to point out that genre films are very often more about their own mechanics than meaningful themes. Giallo cinema takes that tendency to an extreme, and the neo-giallo of Strickland or Malfitano intensifies the operation still further.

This is why I am in two minds about the publicity materials that take the tack of stressing a putative critique of ‘toxic masculinity’ inherent in this parade of warped psyches and violent acts. This seems to me like a bit of special pleading, with one eye nervously on the Me Too zeitgeist. But it’s pretty silly to seek a politically correct critique in a movie of this type. The truth is that the appeal of giallo for its many fans has always been its all-pervasive air of perverse disrespectability: sexuality (of every kind and gender) has a generally toxic pallor in these tales of incestuous bonds and kinky ménages. And if that’s a wavelength you’re happy to tune into, Bloodshot Heart offers a rich experience.