Ten comedians take their shows to a global audience with this excellent straight up funny series.
Anthony Morris 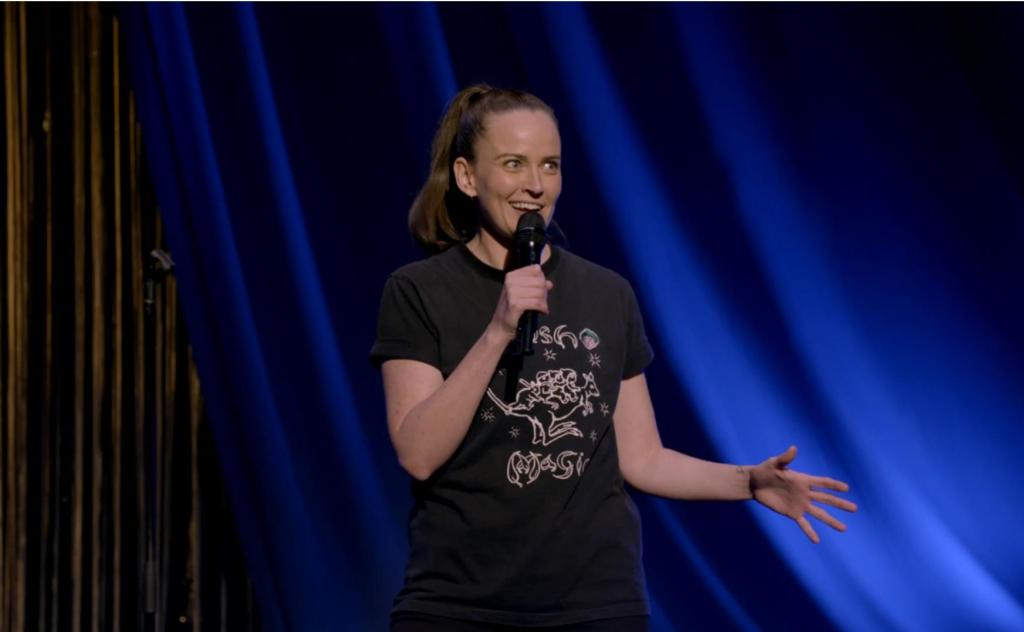 Zoë Coombs Marr’s dazzling Bossy Bottom was one of the first specials out of the gate. Via Amazon Prime.

Australian television loves stand-up comedy. Not just the Comedy Festival clip shows that make semi-regular appearances on the main channels either: earlier this decade ABC2 ran two seasons of The Warehouse Comedy Festival, while more recently Stan – which last week announced the Stan Original Australian Lockdown Comedy Festival, where comedians will record themselves at home performing material they’d planned to tour in 2020 – had their own showcase, One Night Stan.

They’re popular programming because everybody wins. The networks get quality original content featuring big names for (relatively) cheap, while the performers get to preserve (and wring a few extra dollars out of) a show they’ve already toured extensively and would otherwise put on the shelf.

Now Amazon Prime is wading into the local market. Their first foray into Australian stand-up sees ten specials being released over five weeks featuring some of the bigger names in Australian comedy. Money aside, Amazon offers the kind of global reach that Stan or ABC2 can’t provide. The only way to go bigger exposure-wise is having a special on Netflix, and you’ve got to be Hannah Gadsby for that.

The one-two punch of Pacquola and Coombs Marr makes for a great introduction both to the series and to the sheer range of quality stand-up currently out there. Pacquola’s made a name for herself through her television work over the last decade, whether it’s on ABC sitcoms Laid, Rosehaven and Utopia, regular appearances on panel shows like Have You Been Paying Attention?, or her recent winning stint on Dancing With the Stars.

But her career began with stand-up, and All Talk shows off both her ease on stage and her ability to go deep into personal issues (whether they’re depression or an injury that requires regular visits to physical therapists massaging her jaw from inside her mouth) without popping the well-crafted feel-good bubble this show creates. She’s a smart, funny best friend who comes across like even she can’t believe some of the stuff she’s telling you. The whole show is a delight.

For the last six years or so Coombs Marr’s stand-up has focused on her blokey character ‘Dave’, a stunningly awful male stand-up comic. With Bossy Bottom she shrugs off her alter-ego to appear as herself and go back to basics with a show that’s ‘just jokes’. This rapidly proves to not be the case, though there are plenty of excellent jokes on offer.

Much of the fun here comes from the way Coombs Marr constantly bends her comedy back on itself, twisting set-ups and jokes to reveal new angles, letting the audience know what to expect and then surprising them with it anyway. It’s a dazzling exploration of everything comedy can be, mocking its darker aspects while relishing the sheer silliness of it all.

If Tommy Little’s show suffers a little by comparison, that’s hardly his fault. The high-profile Project regular wrings plenty of laughs out of Self-Diagnosed Genius’ centrepiece, an ill-judged attempt at the Antarctic Ice Marathon. With dodgy knees, a lack of decent training, and motivation that largely stems from a drunken night in Sri Lanka, it’s a comedy gold mine, but some of his other shorter bits, while funny, lack focus.

Alice Fraser’s show Savage has been around for a few years now. In a way it’s a show she’s been writing her whole life, dealing as it does with her mother’s lifelong struggle with MS. As much a story being told as it is a stand-up routine, it’s both extremely funny and deeply moving, anchoured throughout by Fraser’s seemingly effortless charm. It’s not the most laugh-filled show of the series, but it feels like both the most intimate and the most thought-provoking.

Amazon’s stand-up comedy showcase was planned and put together well before our current coronavirus crisis, It’s tempting to ascribe some deeper resonance to laughing along with a virtual crowd at a time when public gatherings are banned. But really, these shows are all just straight-up funny; if you need a laugh, here’s where to look.