From Peter Rabbit 2 to Maya the Bee 3 and The Dry, Anthony Ginnane does his annual scorecard of Australian films' global theatrical performance.
Antony Ginnane 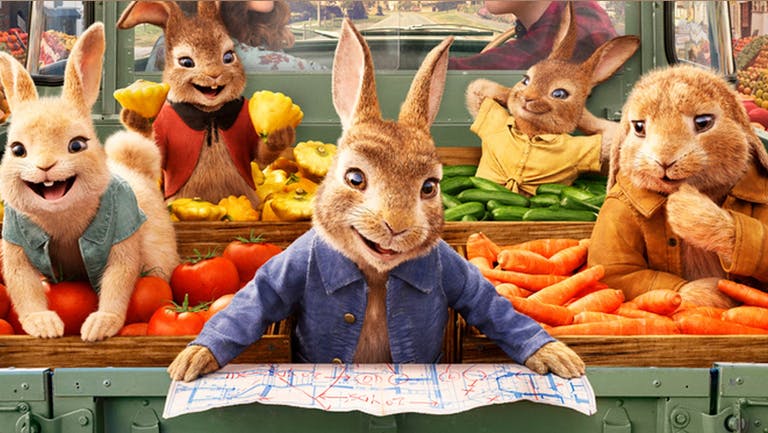 This is the fourteenth year that I have presented an annual round-up of the international theatrical performance of Australian Feature Films for ScreenHub. Here we cover films released outside Australia from January 1 through to December 31, 2021.

This is the second year in which COVID has forced cinemas in many territories to close or operate at significantly reduced capacity, but when they have been open, with reduced competition from mainstream studio releases, independent and local productions have flourished.

In addition to theatrical releases I will also mention certain titles that have largely bypassed theatrical and were released directly (day and date) or virtually directly to VOD and SVOD in the US and/or Netflix or other streamers worldwide, or on pay TV only outside Australia.

The number of these titles, especially in the US, is increasing. Unfortunately, there is still very little hard data readily available on the results of digital exploitation despite the fact that for many Australian films these new media outlets have become the only available entrée into the US and many foreign markets. I have tried to note such releases for each title. The world-wide box office gap between major tent pole theatrical releases and micro theatrical releases of all English language titles – not just Australian films – continues to accelerate – despite 2021 being another unusual year.

But some form of theatrical release, however limited (and even via digital cinema or drive-ins), remains for many producers a hoped-for result as it is still a significant driver of ancillary revenue (the ultimate all media net result) particularly in territories where legislatively enforced or marketplace dictated windows currently curtail day and date ancillary release. But such a release is becoming harder to achieve.

In reviewing the results, it is worth recalling that in all these foreign territories Australian films complete for screen space with both the US majors – just as we do in Australia – and with high profile local language titles as well – but for a second year the majors’ presence in the theatrical space has been significantly reduced.

Read: How Australian films did globally in 2020

These 22 titles in international release were supplemented by another 10 titles from 2020, 1 from 2019, and 1 from 1994 that continued to move through additional territories or were re-issued. All of the premiere titles reported on this year have multiple territories licensed that have not released due to COVID closedowns and will carry over into 2022.

It is likely that future years will see a further reduction in titles in international cinema release as a result of the increasing caution of acquisition executives, as territory after territory looks to flat or diminishing cinema attendance figures; the collapse of the middle budget market and the substantial reduction in box office for specialty and non-tent pole releases along with the virtual disappearance of pre-sales in the A territories for the majority of the films Australian producers are packaging.

It is likely that future years will see a further reduction in titles in international cinema release as a result of the increasing caution of acquisition executives, as territory after territory looks to flat or diminishing cinema attendance figures; the collapse of the middle budget market and the substantial reduction in box office for specialty and non-tent pole releases along with the virtual disappearance of pre-sales in the A territories for the majority of the films Australian producers are packaging.

The box office amounts cited do not themselves indicate the net return to the producer or the ultimate profitability of a title in a territory. For such analysis other data including distribution terms for the territory including media licensed, MG (if any) and/or if the film was licensed on a flat or revenue share deal, the ad spend, the degree of cross collateralisation – all these metrics need to be factored in to get a net position. However, theatrical box office numbers and length of run do indicate an initial level of success and marketplace acceptance.

Let’s begin with the years most successful titles. Readers should note that all box office figures quoted are in US dollars unless otherwise noted.

I will highlight a number of significant theatrical successes of the sequel and then provide a chart covering key territorial results versus the sequel.

All these releases were handled by Sony, except for Russia where the Disney/Sony JV released.

With a worldwide gross of $83,601,013, Mortal Kombat was Australia’s second-highest international title in 2021. A selection of grosses follows:

But Mortal Kombat was a clear demonstration of South Australian production values worldwide.

Given COVID and given the film had an absence of strong lead cast and historically films based on a single person shooter game have not performed – Mortal Kombat did well.

Maya and the Bee – The Golden Orb

Like its predecessors Maya and Maya 2, this will have an extended release pattern and more and more territories will roll out in 2022.

Altitude UK virtually sold out the world on this taught little thriller. A great release in Spain by Contracorriente grossed $348,5566 in May. UAE through Phars Film pulled a further $168,087. In Croatia in June the film grossed $29,906. Intercontinental released in Hong Kong in June and grossed $59,595 over one week. South Korea through Joy In Cinema in August grossed $19,907 over 2 weeks. Portugal through Contracorriente grossed $7,833 over 2 weeks. The film went direct to DVD in the Netherlands and the UK. Shudder took streaming rights in Germany and the US (after RLJE gave it a token ultra-limited cinema release in the US).

Titled Rock Sugar in Australia, Gravitas picked up the US/Canada rights and put it straight to TVOD in June.

Gravitas acquired the US/Canada rights and ran a micro theatrical and VOD release. Grosses were not reported.

Let’s continue in alphabetical order with the remaining 2021 titles:

Roadshow ran a small festival skewed preview release in New Zealand in December grossing US $3,110. 2022 will see a US release plus the UK, Greece and Latin America and other B territories.

Kaleidoscope did a specialty one week release on 8 screens in the UK over 7 days in June grossing an anaemic US $646. Arcadia released in New Zealand on 20 screens over 14 days for a total of NZ$1,000.

387 Films launched in New Zealand in November ahead of its Australian release on 58 screens. It has grossed NZ$189,060 over 5 weeks. A more than credible outcome given COVID lockdowns and restrictions during the release. In the US, IFC released in October/November on 44 screens hitting US$35,910 over 35 days.  Not terrific, but a good PVOD pre-launch. In the UK, Entertainment sold to Netflix forgoing a theatrical given the COVID reality.  More territories, including Australia, to open in 2022.

A DVD/digital and VOD release in the UK in November and SVOD in the US also in November took place.

H is for Happiness

A small release by New Horizon in Poland netted $6,176 in March. In Russia/CIS on June 24 the film released on 54 screens and grossed $3,483 over 2 weeks. There are a number of territories still to release in 2022.

UK released May 24 on PVOD and in the US on May 7 with a micro theatrical release and digital day and date. No grosses reported.

Studio Canal released in New Zealand in May on 47 screens grossing a credible NZ$121,045 over 98 days in release. Filmax released in Spain for a disappointing $29,547.

To date only a small festival release through Madman in New Zealand for NZ$557 has taken place. The UK, USA, France etc to follow in 2022.

Monster released in New Zealand on 31 screens over 21 days grossing NZ$26,192. Russia released in June grossing only $8,653. Disappointing. Signature gave the film a pre PVOD/TVOD release in July in the UK grossing only $3,670. Saban acquired the US/Canada and went straight to PVOD/SVOD.

Roadshow released on 114 screens in New Zealand and grossed NZ$1,063,976 over an extended 147 days. A good outcome. Paradiso released in Russia/CIS grossing $3,705 over 2 weeks. A disappointment. A number of international territories including UK, US and UAE will release in 2022.

Gravitas gave the film a token pre streaming micro release in the US in December. Grosses were not reported.

Gravitas picked up the US/Canada rights and went straight to SVOD / TVOD.

This Little Love of Mine

This has been a very successful indie family film.

Goldwyn gave the title a micro pre-streaming release in the US in June under the title Rising Wolf. Grosses not reported. Goldwyn had acquired all rights outside Australia/New Zealand.

Green Media released in February through WB in Vietnam on 310 screens and grossed $25,669 over 14 days. Not great. Magic in Russia has been holding the title at matinee screenings over 56 days since September grossing $29,556 to date.

Blue Finch gave the film a token theatrical release in the UK in June.

After its US PVOD release via Gravitas in 2020, the film launched on Hulu and Amazon. Korea and Germany are still to release. Netflix acquired New Zealand rights.

The film received a micro release in Finland but grosses were not reported.

Disney released in South Africa on December 4 on 20 screens grossing $3,321. Hardly worth it.

387 Films released in New Zealand in February 2021 and grossed NZ$135,000 despite Auckland’s COVID shutdown. UK release through Studio Soho is scheduled for January 2022.

Retitled Hearts Down Under for its post Netflix release, it played the Hallmark Channel in April.

A UK PVOD release through Pecadillo took place in April.

Pixma/Pioneer continue to play this title on and off during the year with gross now at $36,397. Colombia grossed $20,919. Italy through Medusa released in July bringing the local gross to $49,076.

Croatia released in January grossing $50,857. Russia through Vorel released in February on 14 screens and played matinees throughout the year. Total is $56,832.

An acceptable year for Australian cinema internationally given COVID.

Here are some highlights:

Looking ahead to 2022 box office

This year is looking positive with Elvis, 3,000 Years of Longing and Black Light, which should perform strongly world wide.

On the genre front, Interceptor, Gold, Wyrmwood: Apocalypse and Recoil should work in action markets; Portable Door and Blueback with family audiences, and How to Please a Woman with the seniors. This is potentially a good balanced slate for international. And hopefully we have now passed a COVID tipping point for cinema exhibition.

Melbourne born Antony I. Ginnane has produced or executive produced 72 feature films, MOW's, miniseries and TV series over 50 years including Patrick, High Tide, The Lighthorsemen, Screamers, Last Dance and most recently (in partnership with Kris Wyld) the TV series Pulse for ABC-TV, Never Too Late with James Cromwell and Jacki Weaver. His latest feature The Girl At The Window, with Radha Mitchell is in post production. The Unusual Suspects, his first book, was published by Currency Press in 2015.