2021: A head under water. Adrian Martin’s year in review 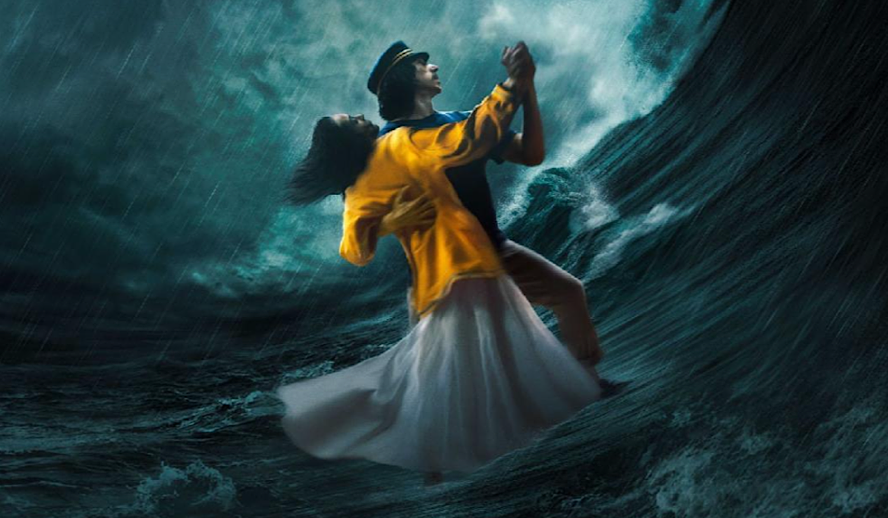 Braced for the deluge. Leos Carax’s ‘Annette’ was a cinematic highlight of 2021. Image via Amazon.

At the end of a second pandemic year, I cannot get a particular image out of my mind. It is of a head being held forcibly under water, until that person’s life is extinguished. Blame it on the movies: I kept encountering this image everywhere. The watery setting changes: in The Many Saints of Newark (a pale prequel for The Sopranos), it happens at the beach. In the entertaining action film The Protégé, a bathtub does the trick. And in 2021’s absolute best film, Leos Carax’s innovative musical Annette, this violent crime occurs in a domestic swimming pool. In that last case, Carax appears to have been haunted by the identical scene in an older film, the psychological thriller La Piscine (1969) starring Alain Delon and Romy Schneider, which came around for restoration, re-release and rediscovery on Blu-ray during the year.

I might have dismissed all this as the fortuitous coincidence created by a boggled cinephile mind, if it were not for the discovery in the latest issue of NECSUS, on December 13, of a splendid new video essay titled Murky Waters made by two scholars from University of Amsterdam, Jaap Kooijman and Patricia Pisters. Subtitled ‘submerging in an aesthetics of non-transparency’, it brilliantly edits together images of swimming, bathing and lounging poolside from a global range of films. Without recourse to any explanatory voice-narration, it weaves a disquieting mood and traces a disturbing tale. From La Piscine to Baz Luhrmann’s The Great Gatsby, Kooijman & Pisters rapidly take us from conventional, idyllic images of luxury, decadence and cool, clear water to murkier, more troubled depths: panic, entrapment, drowning, death. The catastrophe evoked is not only interpersonal and psychological – ­as in all the films of 2021 cited above ­– but also ecological. The darker and more polluted that our shared water (in all its forms) becomes, the more horrific our collective fate looks in its ‘non-transparent’ reflection.

CINEMA, BUT NOT IN THE CINEMA

Confession: as a filmgoer (based near Barcelona), I am still as wary of travelling to see movies in a public theatre as I was throughout 2020. And I am certainly not alone in this fear which, throughout the world, is spiking once more with the current Omicron scare. Yes, many cinemas have now re-opened. But I would rather wait for Spielberg’s West Side Story and Apichatpong’s Memoria (citing two extremes of contemporary production) to drop into the streaming channels before I take a dip with them, thank you very much. The same goes for my involvement in public speaking, or attending film festivals: I’m still stuck at home for most occasions, voluntarily this time, ‘interfacing’ with my (equally non-transparent) screen.

Still, production goes on, and the work gets out there, one way or another. Prestige films that went on the shelf when the Cannes Film Festival was cancelled in 2020, such as Wes Anderson’s delightful The French Dispatch, were finally unveiled a full year later.

More renegade, run-and-gun projects, like Abel Ferrara’s extraordinary, semi-sci-fi Zeros and Ones starring Ethan Hawke in a dual role, were passed around from cinephile to cinephile as precious contraband.

Overall, it was not a great year for world cinema – or at least as much of it as I was able to catch. Many eagerly awaited films turned out to be disappointing, or merely good in patches. After the career highpoint of Elle in 2016, Paul Verhoeven’s Benedetta failed to light my fire with its supposedly transgressive tale of lesbian nuns in a restrictive convent – there was something oddly flat, schematic and academic about it. (His next project is a contemporary thriller, which bodes better.) Edgar Wright’s trippy Last Night in Soho and Pablo Larraín’s Princess Di fantasia Spencer were strenuous and boldly stylised, but also repetitive and ultimately simplistic: once they have set up their premise, they have nowhere much to go. And, although I generally carry a torch for the work of director-writer Mia Hansen-Løve, I found her Bergman Island weighed down by all the peripeteia introduced by its novel setting (Ingmar Bergman island, Bergman tour, Bergman cinema … ).

The welcome incursion of women filmmakers into genre cinema continues to be one of the most fascinating action-stations of the current scene. Highlights of the year in this area include two features from debuting British directors, Corinna Faith’s The Power (an ingenious welding of horror tropes with social agitation and abusive trauma), and Prano Bailey-Bond’s Censor, a lively revisitation of the 1980s ‘video nasty’ phenomenon. The latter affords us, by the by, a glimpse into the alternately very slow and very fast temporalities of film circulation during the pandemic: premiering in January 2021 at Sundance and reaching various national screens in the months since, Censor’s ‘special limited edition Blu-ray’, stuffed with extras probably proclaiming it to be a modern classic, is already available for pre-order from the distributor Second Sight! It’s hard to keep up, sometimes. Mention should also be made of an extremely promising horror short: O.B. De Alessi’s striking Mudmonster from Italy.

In relation to its genre of the Western, Jane Campion’s The Power of the Dog is more oblique. We are as far away from John Ford as it is possible to be – which is both a good and a bad thing. No guns, no heroism, few markers of a burgeoning civilisation in Campion; there is only toxic masculinity (crammed mainly into the body of Benedict Cumberbatch) and its menaced victims: a solitary woman (Kirsten Dunst), her sensitive husband (Jesse Plemons) and her vulnerable teenage son (Kodi Smit-McPhee). And all this placed in a minimalistic setting that recalls Terrence Malick’s Days of Heaven (1978). For me, The Power of the Dog was an extremely dissatisfying film. What others have praised as its mysteries, clues and suggestive depths are clumsily arranged plot-wise, and laboriously worked through in the most obvious fashion. When the tormented Cumberbatch recalls sleeping ‘body to body’ with his adored male mentor and Smit-McPhee prompts him with a one-word queer subtext – ‘Naked?’ – I had to laugh out loud. The two seasons of Top of the Lake showed Campion at her best; but not this misfire. (I realise I may be in the minority with this opinion.)

Seated at my laptop in Spain, I didn’t get many chances to see Australian features during 2021. But it was great that James Vaughan’s sophisticated, wittily observant Friends and Strangers begin its public life at the Rotterdam film festival; in global terms, Vaughan possesses a sensibility that networks well with Guillaume Brac (All Hands on Deck) in France and Jonás Trueba (Who’s Stopping Us) in Spain. By contrast, Justin Kurzel’s Nitram seems to me to commit the standard sins of a very parochial sort of Aussie naturalism: obsessed with the surface detail of the imagined life of Martin Bryant before his murder spree at Port Arthur, it avoids any in-depth exploration of what it shows, concentrating rather on a single, unassailable point: the need for tighter gun laws. Gus Van Sant tackled the spectre of the Columbine school massacre with more courage and insight in Elephant (2003).

In terms of shorts, I was on the international jury (online, of course) for the Australian festival A Night of Horror held in October (streaming on demand), and there I was grateful to discover local work by upcoming talents including Millicent Malcolm (The Familiars) and Alex Linder (Anoxia).

Although fans are still hanging out for the new, inevitably delayed seasons of the Breaking Bad spin-off Better Call Saul and Pamela Adlon’s sublime Better Things ­– both of these promising to wrap things up for good – there were some terrific TV series this year. On Netflix, I enjoyed the phantasmagoric visions of Brand New Cherry Flavor and Mike Flanagan’s Midnight Mass.

Succession maintained its high level of snarky melodrama among the entitled rich throughout the third season – this is a show that puts a lot of effort (and, presumably, budget) toward ensuring a constant variety of locations and attendant plot possibilities. On a far more modest scale, How To with John Wilson is a droll treat in ‘personal documentary’ mode. The first season of Wilson’s ongoing portrait of everyday New York ended with the jolt of a melancholic swan dive: the beginning of COVID-19. It will be intriguing to see on what point he concludes in 2021. And Larry David’s Curb Your Enthusiasm returned for an 11th go-round to appease the non-woke grump inside many of us.

On the televisual downside, I could not bear either Adam Curtis’ latest monotonal collage-diatribe, Can’t Get You Out of My Head (BBC), or the David Fincher-guided ‘visual essays … for the love of cinema’ series Voir (Netflix), which was banal in the extreme. Why don’t they ever ask real film critics to be a part of such projects, rather than lame pundits from the likes of Film Freak Central, Awards Daily and Ain’t It Cool News?