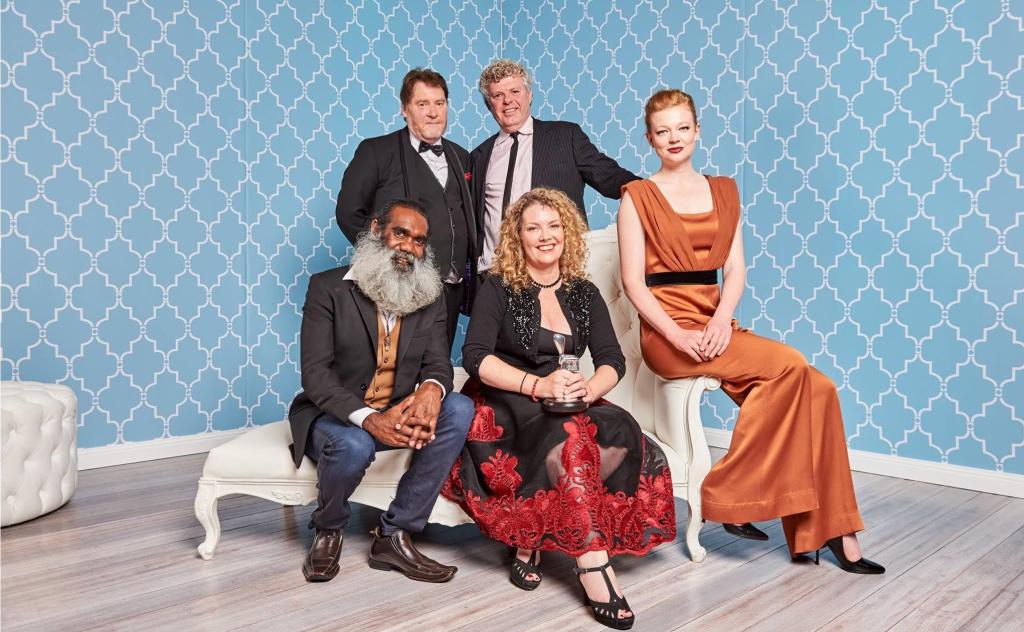 One way that Mark Ruse would like to be remembered – top left with his special face on in the background with his mate Stephen Luby as the company won the 2016 Logie for Most Outstanding Miniseries with Secret River.

This Saturday, we mourned the death of Mark Ruse. This loss comes as a surprise and a shock, cutting into a moment when the Victorian screen community is so disintegrated. While we fear a plague, he died suddenly at the age of 64, bringing an end to a humane and gentle life.

But in that natural full stop, we lost a presence threaded through the city’s broad-brush comedy for a generation. He and his partner Stephen Luby created the spaces for comedians to entertain millions of people. How a society laughs is a sacred thing, and he found the creators and kept the flame and brought us back to the rituals he loved again and again.

His business partner of 20 years, Stephen Luby, described the decades they worked together as the project of ‘ a shared vision – we both wanted to produce original, inventive and entertaining Australian content.

So we hired a small office, did a crude amalgamation of our surnames – RUse and LuBY – and stuck a bit of paper on the door with the inscription ‘Ruby Entertainment.’  Thus began a journey which allowed us to collaborate with so much wonderful talent on TV series and films such as Kath and Kim, Crackerjack, Bad Eggs, Bed of Roses, The Secret River, Rostered On, right up to The Hunt, which went to air last week.’

In his own homage, Luby bore witness to a man who gave Australian television, comedy in particular, so much:

‘Mark and I worked together on all of those projects – and many, many more – for two decades. Looking back now, I can’t quite believe we did all of that. What a wonderful legacy Mark has left, and a bottomless well of good memories.

He would be so pleased to look back over it now, as he had told me that since the age of 13, he had dreamed of having his own production company. But that’s just what the CV says.

What I got to see – all day every day – was a man of incredible integrity, kindness, creativity, intelligence, dedication, work ethic, humour and goodness.

Mark’s express philosophy was to “enable other people’s talents to shine.” He loved to support and nurture people’s creative journeys (including mine!). Producer skills developed since his formative years at Swinburne Film and Television School in the 80’s were distilled into an elixir of creative insight and a wise problem solving capacity that I came to rely upon at every turn. He was equally at home providing incisive script feedback, negotiating a contract, or doing a Producer Offset final return.

We had countless family dinners and outings with our partners, and our children grew up together, through primary and high school, into the wonderful young adults they all are now. We supported each other through health and personal crises. We went through a phase where we loved a cigar and a balloon of cognac, and we used to laugh at our own ridiculousness in doing so.

Mark Ruse gave me, and so many others, so much of himself. His passing is such a great loss to the Australian screen industry, to his friends and colleagues, and to his wife Celine and their four children and extended family.

Mark’s spirit and legacy will continue to permeate and inspire all of our lives, and will never be forgotten.’

TV Tonight and IF have both responded to the death of Mark Ruse as well.

While he spent his life in the dark arts of comedy, he was also an executive producer and producer on Secret River. Paul Daley in The Guardian used profound adjectives to describe it: ‘It is excellent. It is important. It is courageous, confronting television’.

There was a lot more to Mark Ruse than the gift of laughter, loyal love and an impeccably written contract.