The Devil is in the detail on government changes. Some sulphur, some smiles

QAPE & kids & extra dosh. What does it mean?
David Tiley 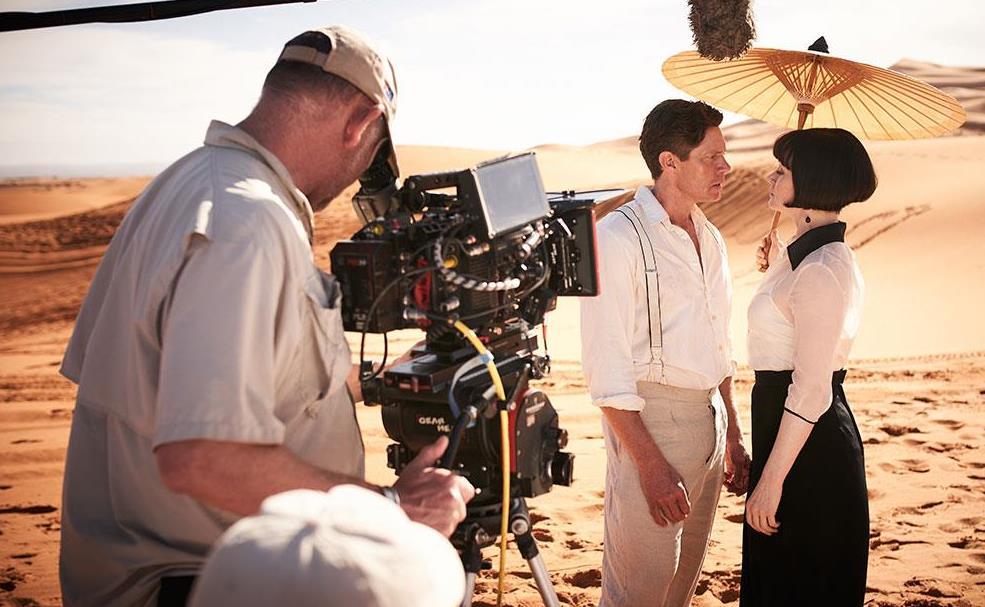 Miss Fisher and the Crypt of Tears. We hope that is Australian sand. Image; production

The government quietly put out a pair of fact sheets on Monday 28 September, even before the official announcements of their structural changes. They are here and here. What do they add?

As I went through them, I had advice from Yvonne Collins, a hugely respected producer and line producer. The opinions and mistakes are mine.

QAPE is the real cost of making a project with important exceptions. Producers cannot charge more than 20% of the above-the-line fees to QAPE. So expensive actors, directors and producers can claim any fees they like but the producers won’t get a percentage of the outlay back.

The minimum QAPE threshold is up from $500,000 to $1m, which cuts out a heap of lower budget Australian film production. We are seeing costs rise, while distribution guarantees in cinema continue to shrink, so producers are looking for more and more investment or bank loans. The result is probably an incentive to increase budgets to reach the magic $1m, which may be a good idea in itself.

QAPE can no longer be claimed for costs outside Australia, which is not fun for documentary producers, for whom that exemption was developed in the first place. The PEP scheme via Screen Australia provided an equivalent to the offset for low budget projects. Now that threshold has grown, we may see PEP increased, and it could be deployed on low budget features. Mind you, a $750,000 documentary has a respectable budget but a $750,000 feature is most likely going to look pretty shabby.

Between these two provisions we see a disincentive to shoot overseas, which runs counter to the drive for internationalism, and also sinks attempts by low budget filmmakers to embed in Asia.

The 65 hour cap on television series has been removed as well. This has been cited as the reason why long form series are stopped; in practice it means that well established drama series at the right scale will be supported indefinitely. That is less important now that those long series are unfashionable.

Overheads cease to be eligible expenditure as well. Those overheads were first permitted 20 years ago as a means of helping companies to become more sustainable, as they funded producers to stay on the production during post, delivery and marketing.

Copyright expenditure on Australian IP is now capped at 30% of all production expenditure, which includes costs which are not QAPEable. I am not sure why rights cost can be that high anyway; it may have to do with projects which have already incurred large obligations in development.

This is the good bit. As the fact sheet says, ‘The Australian Government is providing an additional $30 million to Screen Australia over two years from 2021–22 for funding for Australian drama, documentary and children’s screen content across film and television.’

And, ‘Screen Australia gets an extra $3m to support what is called a “Screen Writing and Script Development Fund”.’

Screen Producers Australia had a Zoom session with CEO Graeme Mason on Thursday 1 October, just as the dust was beginning to settle.

As he acknowledged, the agency has an extra $2.1m for this year to deal with the internal costs of dealing with COVID.

He wants to create a situation where streamers are ‘knocking on people’s doors and saying what have you got and investing in early. And I think a challenge for us at the moment is a lot of our stuff is good, but not great for an international buyer.’

He is very clear. The extra money is a different fund which is focused globally.

What about the extra $30m for production? He said, ‘And also, we can be putting more production funding potentially into things to ensure that they’re at a price point that works.’ Presumably, that will be some compensation for the loss of the 10%.

We have to remember that the market is really swirling around. One way of dealing with the loss of the 10% is for producers to make telemovies, which tends to fit the style and concerns of many lower budget features anyway. Against that is the likelihood that networks will simply reduce their license in return.

In that scenario, nobody gains, except the broadcasters, and producers are left with increasing costs and a declining demand from free-to-air broadcasters.

The announcements also said, ‘The Australian Government is providing $20 million over two years from 2021–22 to the Australia Children’s Television Foundation (ACTF) to invest in the development, production and distribution of Australian children’s content.’

According to Jenny Buckland, the CEO, the money is to go into production, but that can be seen in the widest sense. It can include development, production investment and distribution advances.

We will look more closely at this on Monday; the point really is that we will see children’s TV specialist companies in real trouble, while broader-based companies focus on other forms of production. The real question is: can the streaming companies be used to plug the gap?

‘Obviously the issue for everybody is who’s going to be commissioning this content,’ Buckland said on the phone. ‘And we would hope that the commercial broadcasters might be attracted to do quality content.’

The new quotas give them the flexibility to do this, after all. Perhaps ABC and SBS could commission more but that will be a tough ask.

The streamers? ‘That’ll be the challenge. We’ll be reaching out to them and hoping they see it as an opportunity to commission some great children’s content. But yes, the money is going into content ad we’ve got two years of it, and we will be wanting to make maximum impact,’ Buckland said.