With less films, the Sydney Film Festival is making ultra-sure that the program distils the times.
David Tiley 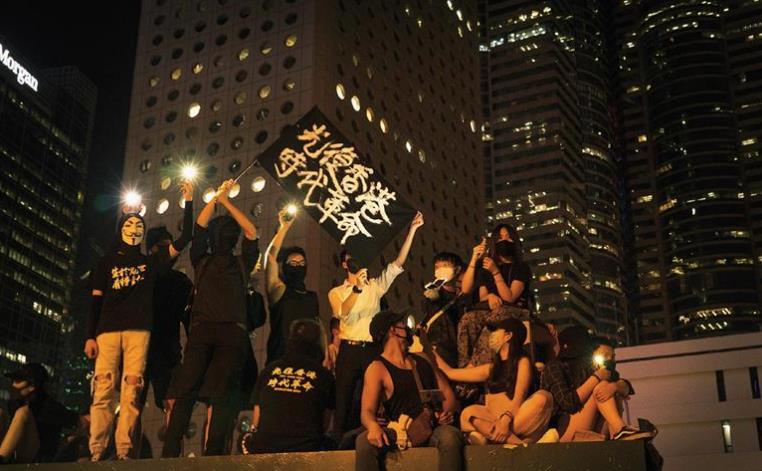 Just over two months before the opening night, the Sydney Film Festival announced the first 22 films. Festival director Nashen Moodley is desperate to blow the ghosts of Covid clean out of town.

His strategy seems to be about intimacy and relevance. There are few mainstream names in this first list, but plenty of filmmakers grappling with the implications of history in our own lives. One key film for the festival is When a City Rises, about the Hong Kong resistance seen through the eyes of four protestors.

Sundance winner Blerta Basholli’s Hive is about a mother in Kosova whose husband is missing. She builds a small business to feed her family and confronts the village patriarchy…

Swan Song from Udo Kier is about a former drag queen and hairdresser who takes off from a retirement home to give a dying client one last bespoke haircut.

Memory Box, made by Lebanese team Joana Hadjithomas and Khalil Joreige is triggered by a trove of pictures and letters sent from Beirut to relatives resettled in Montreal, with clever photographs and animation….

Amanda Blue’s documentary about feral fashionistas Jenny Kee and Linda Jackson, Step into Paradise will contrast with the very different Wash My Soul in the River’s Flow, about Archie Roach and Ruby Hunter.

There is so much more, much of it in the bendy land where genre is joyously purloined to do wheelies with ideas. The Justice of Bunny King, made in New Zealand by Gaysorn Thavat, is a modern day battler pic, Night Raiders by Cree/Métis woman Danis Goulet is an Indigenous Sci-fi film, Christian Petzold’s Undine is a European water nymph fable while The Ape from animator Linda Hambäck is a standard adoption tale except that the new parent is a giant primate which the locals find unbecoming to their shrivelled hearts.

Imagination is a superpower which blows away many sorrows, but Nashen Moodley still has to wrestle with the practical effects of Covid.

‘We have longer turnaround times between sessions so that the cinemas can be cleaned’, he told Screenhub. ’ And to allow easier access into the cinemas so as a consequence we have fewer sessions.’

The program is down by 25%, which means that every film will really have to earn its place in the cinemas. The decision process takes more time, as the programmers must watch more films before they make choices, and filmmakers still want quick answers.

‘Thats a big change. The other thing is, we’ve had to play a very long game. When the festival was cancelled in March 2020, there were some films that I immediately tried to hold for us until the next edition. For it to play first in the cinemas. That was not too happy.’

The program seems to emphasise compendium stories, either by one director or a group on a common theme. When a City Rises is a standout example.

‘There’s some really fascinating reasons for some of these films,’ Moodley observed. ‘Mohammad Rasoulof, the Iranian director, is banned from making films and has been for many years. But he continues to make films. There is No Evil is four short films because they receive far less scrutiny than feature films so he can work under the radar.’

There is No Evil is about four conscript soldiers performing different parts of public executions.

‘Ryûsuke Hamaguchi’s film, Wheel of Fortune and Fantasy, is very different. It is an exploration of a team, which is most usefully explored through three short films. One of them was shot under Covid and you can see that very clearly.’

The major Australian festivals tend to showcase Cannes standouts, but that is very difficult here since the French festival ends on July 17 and the full program for Sydney is announced on July 21. But Moodley does expect to announce some late additions, even though the competition for slots is so intense. Film tragics are already speculating about the opening night film.

‘You and me both’, said Moodley. ‘It would give me no greater pleasure to have the opening film secured as the first film of the festival, but it almost never works out that way. Sometimes we have known two months before the festival, but this is not one of those years so we continue to investigate the possibilities.’

How does he respond to the way Netflix has refused to negotiate with Cannes over Jane Campion’s The Power of the Dog and Blonde by Andrew Dominik?

Read more: Netflix snooty at Cannes and our sector clobbered.

‘I think the films will not be streaming any time soon. But I am pretty sure they will both go to Venice, or some combination of Venice and Toronto. Venice has been very happy to play Netflix films in competition without any qualms. So it makes sense.’

If so, Campion and Dominik will fight to be there. On the other side of the world, behind our good/bad wall of ocean and legal regulation, there will probably be no international guests in the Sydney Film Festival at all.

Discussions with filmmakers, even on Zoom, are catnip for serious film lovers. Here is the Berlinale’s encounter with Danis Goulet, who made Night Raiders.