Now in its 19th outing, the GCFF retains a populist flavour but brings in art, industry events, awards, and big news.
Rochelle Siemienowicz 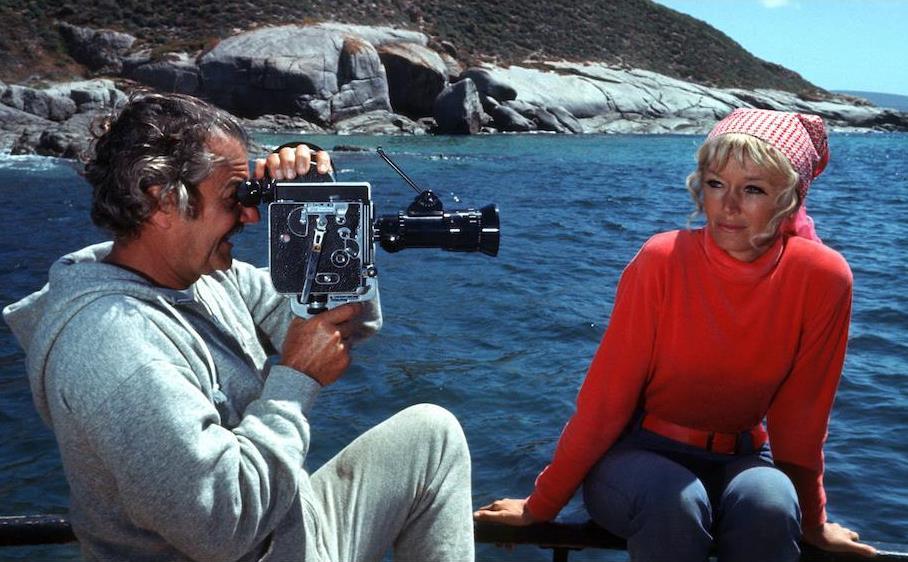 The Gold Coast Film Festival (GCFF) opened this week with the Australian premiere of the Valerie Taylor: Swimming with Sharks. This seems like a perfect film to open a Gold Coast cultural event: a Sundance-selected documentary (directed by Sally Aitken and produced by Bettina Dalton) that works as a classy portrait of a pioneering conservationist, it also features monster sharks, shapely blondes and some nods to Australia’s gung-ho ocker past. Now in her 80s but still sprightly and golden, Taylor was there to walk the red carpet.

Now in its 19th year, the Gold Coast Film Festival will screen more than 100 films, panels, pop ups and industry events from 14 – 25 April. This will take place across ten venues on the Gold Coast, with the home base for most premieres being HOTA (Home of the Arts).

‘a classy portrait of a pioneering conservationist, it also features monster sharks, shapely blondes and some nods to Australia’s gung-ho ocker past’

The new festival director is Aimée Lindorff, taking over from Lucy Fisher, who helmed for the last five years. Lindorff’s background in cultural events includes being Program and Services Manager of the Queensland Writers Centre, producing Screen Queensland’s SQ On Air podcast, and working as production manager at WildBear Entertainment. She also has experience with the festival itself, being the events producer of the GCFF in 2017, ‘producing Australia’s first Gold Coast Movie Locations Tour.’ (With all the action taking place up there, future tours will be increasingly packed.)

Film Fantastic: from fantasy and sci-fi schlock to running BIFF

The festival began its life back in 2002, as an event for fantasy and sci-fi films. Modeled on the Brussels International Festival of Fantasy Film, it was a showcase for horror, special effects, animation, children’s fantasy and anime – the kinds of films less likely to be celebrated in more highbrow festivals, and more likely to be made into theme park games at Warner Bros. Movie World down the road.

In 2014 that focus officially changed towards a broader more international film festival program, including documentaries, drama and comedy. The change brought about a sharp increase in attendance, support and reputation. But a lot of that original populist flavour remains in the current program. This is, after all, an event intended to showcase the output of the Queensland screen industry and to develop the networks and opportunities within it.

Supported by the Queensland Government through Screen Queensland and Tourism and Events Queensland, and the City of the Gold Coast, the festival is run by Film Fantastic, which is a newly created trading name under Gold Coast Film Fantastic Limited, the group that’s run GCFF ever since 2002.

Film Fantastic also happens to be the organisation just announced by Screen Queensland as the successful tender to deliver the Brisbane International Film Festival (BIFF) from 2021 to 2023. In amidst the other information release was the small print that BIFF’s dates for this year are 21 to 31 October.

Australian Highlights in the 2021 program

Steve Jaggi is his own kind of Queensland screen industry, and has some very specific ideas about what the rest of the Australian film industry is doing wrong. The GCFF premieres two productions by The Steve Jaggi Company, both filmed in Far North Queensland: the romantic comedy This Little Love of Mine directed by Christine Luby, and series Dive Club which will screen on Network Ten and Netflix globally later this year.

Read: Steve Jaggi Company: we make the wrong movies and the industry is a scam

Other Australian films include the world premiere of Joy Hopgood’s Rhapsody of Love, an Asian-Australian rom-com described as the ‘Aussie Crazy Rich Asians’, and produced by Screenhub’s friend and collaborator Ana Tiwary.

Family-friendly film Chasing Wonders, written by Judy Morris (Happy Feet, Babe: Pig in the City) is filmed across Australia and Spain, filmed over five years and introduces actor Michael Crisafulli in the lead role, aged both 12 and 18, in a multicultural story about ‘courage, adventure and family’.

For me, some of the most intriguing offerings on the program are Thomas Wilson-White’s queer magic realist drama, already a festival winner, The Greenhouse; and, direct from Canneseries, Deadhouse Dark, a collection of horror shorts from Australian directors Rosie Lourde, Megan Riakos, Denai Gracie, Enzo Tedeschi, Rachele Wiggins and Joshua Long. Also piquing my interest is the premiere of Stephen Osborne’s sci-fi comedy Strangeville, ‘an unlikely story of friendship and fighting against unknown forces’, a quirky sci-fi drama shot on the Gold Coast with local cast and crew.

Running alongside screenings there’s and industry program across two weekends, with ‘Pitch in Paradise’, a pitching and one-on-one opportunity; and Reelife Industry Panels, on Saturday 17 April and Saturday 24 April, designed for screen industry professionals and screen students to extend their knowledge and networks.

Women in Film at the Gold Coast Film Festival

In 2016 the festival gained recognition nationally for the introduction of innovative initiatives to support gender equality in the screen industry, and was the venue for the launch of WIFT (Women in Film TV) Australia in 2018. Queensland members like Katrina Irawati Graham were instrumental in this. Good moves include simple but important things like committing to ensuring there is gender parity in the number of men and women speaking across the festival, whether they be moderators, guest speakers or panellists.

This year, WIFT Australia’s Queensland chapter will present a selection of short films by female filmmakers in the WIFT Virtual Film Festival Showcase.

The 2021 fest also features a sold out Women in Film Lunch, supported by Screen Queensland (and introduced by Screen Queensland CEO Kylie Munnich), with costume designer Anna Borghesi (Ned Kelly, Hotel Mumbai) as guest speaker.  A ‘sumptuous seafood buffet and three-hour drinks package in the gorgeous surrounds of the Bazaar at QT Gold Coast’ sounds like a fun professional networking event for women, to balance out the sold out Pink Party 20th anniversary hotdogs and cocktails screening of girly favourite Legally Blonde at the same venue.

Sue Maslin AO, who is a Woman in Film activist and producer extraordinaire, is the recipient of this year’s Chauvel Award for industry achievement. A retrospective of Maslin’s films, from The Dressmaker to The Road to Nhill and Thanks Girls and Goodbye are being screened. Maslin was also celebrated at the Gold Coast Screen Industry Gala Awards last night (Thursday 15 April) held with red carpet fanfare at Warner Bros. Movie World.

This brings us nicely back to Valerie Taylor, the sharks and the other winners.