From Dr Who to The Commons, Money Heist, the Riot Act podcast and more, here are the team's picks.
Screenhub Hivemind 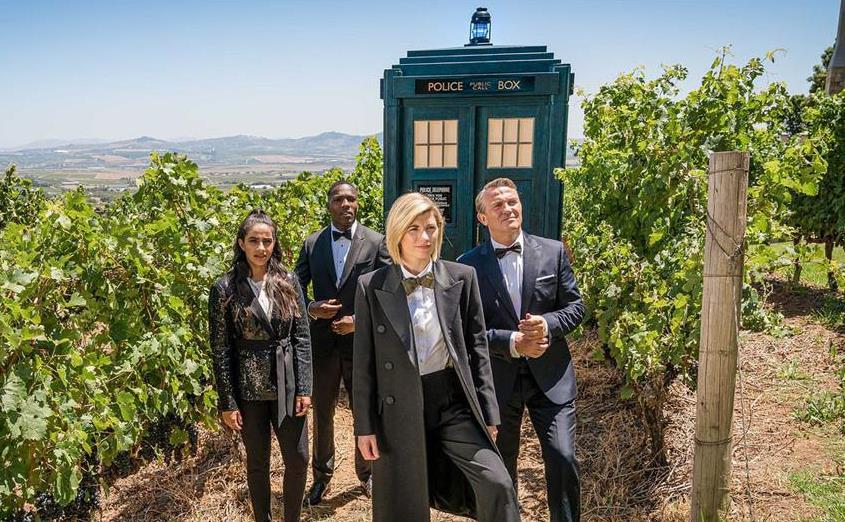 Nice day for a visit to the winery. Screenshot from trailer for Dr Who, series 12.

ArtsHub’s Performing Arts Editor, Richard Watts, has been a dyed-in-the-wool Doctor Who fan ever since discovering Jon Pertwee’s take on the character as a child in the early Seventies. It’s little wonder then, that the TV show he’s most looking forward to over the Christmas-New Year period is the latest season of the popular British sci-fi program.

‘Named Spyfall, the first episode of Doctor Who series 12 is screening as a New Year’s Day treat in the UK instead of the once-traditional Christmas special. Here in Australia it drops on ABC iview at 6:55am on Thursday 2 January, airing that night at 7:30pm on ABC1. Officially recognised as the longest-running science fiction TV program in the world, Doctor Who now stars Jodie Whittaker as the titular Time Lord, whose adventures through time and space have enthralled viewers since the program made its UK debut in November 1963,’ said Watts.

Read more: Five reasons why Doctor Who has lasted 50 years

‘The new series – once again starring Bradley Walsh, Tosin Cole and Mandip Gill as the Doctor’s erstwhile companions, Graham O’Brien, Ryan Sinclair and Yasmin Khan – starts with a homage to the spy genre popularised by Ian Fleming’s  James Bond. We don’t know much about the episode yet, other than the name (which references the 23rd Bond film) and the fact that it stars Lenny Henry and Stephen Fry. I’m looking forward to a rollicking adventure and some thrills and chills – after all, it is traditional to watch Doctor Who from behind the sofa!’

Subsequent episodes of the 10-part series will be available on ABC iview straight after the UK broadcast, screening on ABC television that night (time TBC).

She says: ‘I won’t get to it on Christmas day when it drops, but I’m looking forward to The Commons, an eight-part relationship drama set in a near future dystopic Sydney, where a woman (Downton Abbey’s Joanne Froggatt) struggles to become a mother in the shadow of environmental and social catastrophe. These are big issues that are literally floating in the air right now, and I’m interested to see how they’re dealt with here.’

This is the pick from Jinghua Qian, Artshub Feature Writer & Reviews Editor. They write: ‘Tales of the City is a neat 10-episode series that continues the charming story of an ad hoc, sprawling San Francisco household, first penned by Armistead Maupin in 1978. The show retains enough elements from the previous incarnations of the story to delight existing fans of this family (and several actors, including Laura Linney and Olympia Dukakis, reprise their roles from the 1993 Channel 4 miniseries) while introducing new characters and story arcs that nod to how much the world has changed for LGBTIQ people in the intervening years. Some of the new elements really sing – in particular, the tender, complex relationships between Anna Madrigal (Dukakis), a trans woman just turned 90, and the landlady and matriarch of the household; her tenant and carer Jake Rodriguez, a young trans man (played by non-binary actor Garcia); and Jake’s girlfriend, Margot (May Hong), who supports her partner’s transition but struggles with what it means for her as a lesbian woman. Other elements, however, feel jarring, like the inclusion of a pair of social media obsessed performance artist twins whose ridiculous shenanigans don’t really fit tonally with the rest of the show. Nonetheless, it’s a very watchable reboot.’

This three-season Spanish series comes recommended by Artshub/Screenhub CEO Sol Wise, who says he’s two seasons in and loving it. The story follows a criminal mastermind known as ‘The Professor’ who plans to pull off the biggest heist in history: to print billions of Euros in the Royal Mind of Spain. He enlists eight people with various abilities and nothing to lose. The group takes hostages, and meanwhile on the other side, the authorities strategise to capture The Professor. Wise says it has a great storyline, delivers unexpected twists, with acting and direction A Grade all round.

From Russia to Iran: Across the Wild Frontier (SBS On Demand)

Alana Morris, our Membership and Classifieds Manager, has been watching and loving this documentary series that takes us into territory rarely seen. She says: ‘Hosted by Levison Wood, a former British Army Officer turned traveloguer, the series takes us with him on his walk from Sochi to the Caspian Sea in Iran, snaking his way over four episodes through the majestic Caucas Mountains. It’s a charming show and Levison lets the show’s stars shine: the mountains! Featuring a cast of locals from old village men to a plethora of local dogs, it’s a great watch that lets you holiday in exotic places from the comfort of your hot couch.’

Gemma Eades, our Membership and Classifieds Growth Officer says, ‘In the Christmas spirit I must give a call out to Klaus, lovely new animated holiday family film about a selfish postman and a reclusive toymaker. This is a great take on the classic Christmas story and it’s both entertaining and heart warming. A thoroughly enjoyable film for the whole family to watch together this Christmas.’ Voiced by Jason Schwartzman, J.K. Simmons and Rashida Jones, Netflix makes no bones about advertising it in the ‘Sentimental’ category.

Content Director George Dunford has been listening to Riot Act. He says: ‘This darkly satirical 8-parter takes a potshot at commercial radio’s race baiting and flirtation with extremism for ratings and relevance. Campbell Parkes (voiced by Mark Humphries) is a mild radio host with the graveyard shift and big ambitions. His producer Michelle (Anjali Rao) encourages Campbell to be more controversial to boost listeners all the while spruiking Vacunose, a nasal draining extraction device aimed at the older listeners. Things get out of hand when Campbell fronts a ‘memorial’ to the Cronulla Riots.

Campbell Parkes is a great creation by Humphries – in the same guileless league as his Barabas Loins or other characters from ABC’s 7:30 and SBS’ The Feed – and owes much to the writing partnership he has with long-time collaborator Evan Williams. Added to the writing team is Kacie Anning (known for her successful web series Fragments of Friday) ands Dan Illic. The podcast lassoes in some unexpected voice talent including Gretel Killeen, Indira Naidu, Monica Attard and Tony Martin (in fine character form as a racist rival shock jock). It adds up to just over 3 hours of comedy chock full of musings on the role of media, our place in this and the most gratuitous use of the phrase ‘ball tearer’ you’ll hear over summer.