Behind the excitement of change is meetings, decisions, minutes and spreadsheets. This is phase two of Gender Matters.
Lisa French 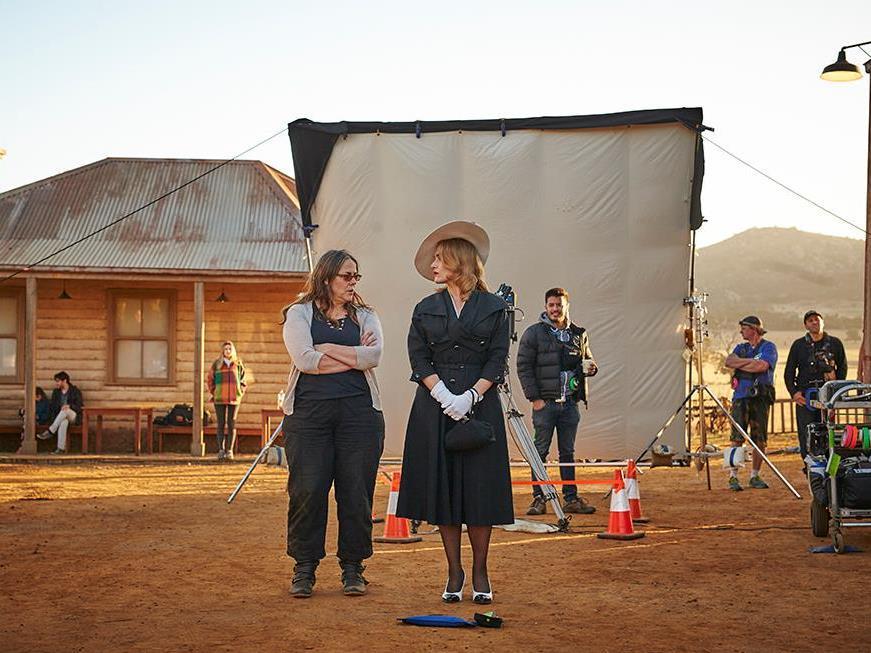 It’s all about practical, unrelenting work. Image: Jocelyn Moorhouse and Kate Winslett on the set of The Dressmaker.

At the Melbourne International Film Festival on Sunday August 6, Screen Australia announced a reconstituted Gender Matters Taskforce (phase two). The first stage was launched in December 2015 when the agency announced its Gender Matters program, a A$5 million plan with a three-year suite of initiatives aimed at addressing gender imbalances in the Australian film industry.

The goal is to focus on the next steps to achieve the Gender Matters target: to have half of production funding going to projects with creative teams that are at least 50% female by the end of the 2018/19.

Screen Australia COO Fiona Cameron has described the taskforce charter as ‘to continue to focus the sector and broader community on the inequality of female representation in front of and behind the screen, and to facilitate strategies to improve the situation’.

Screen Australia’s task force announcement at MIFF included some updated statistics along with some shared Gender Matters production outcomes. What is clear from the data is that it is going to take some time and concerted effort to improve the participation of women in screen industries. The industry wide feature film figures for instance have not improved, so only 16% of directors are women and the numbers of female writers and directors have actually gone backwards, with only the numbers of women producers showing an increase.

However, Screen Australia’s support of projects where at least 50% of creatives (writer, director, producer and protagonist) are female is slowly but surely making an impact. According to Cameron: ‘applications for female-led feature films have jumped considerably to 39% in 2016/17, from a low bar of 22% in 2015/16. Documentary is also slowly inching parity, with 42% of production funding going to female-led teams across the last two financial years.’ In addition, the funded career development initiatives of Gender Matters will take some time to take effect.

Achieving gender equity will require a whole of industry commitment by organisations and companies as well as individual men and women—to action now, and into the future. And some areas of the industry will need a nudge to do their bit—not just for equity reasons but because it makes good business sense. This is evidenced in the strong performance of productions by key women creative, which are drawing in audiences, and the performance of women in awards (way above their numerical representation). The bottom line is that there are strong audiences for film and television made by women in key creative roles, particularly those films or shows with strong female characters (The Dressmaker, Miss Fisher’s Murder Mysteries, Offspring, Love Child, Wanted).

Already there are positive signs that the sector has adopted productive strategies. The Australian Directors’ Guild has brokered eight attachments aimed at female directors, and is running a shadow directing program which has placed talented women into television shows (e.g. Darlene Johnson on Home & Away and Lucy Gaffy on Doctor Doctor). The Gender Matters initiative has also funded mentoring such as the Endemol Shine ‘Australia’s Smart for a Girl: ROAR’ program, which supports entry-level television screen writers.  This, according to producer of Offspring and Puberty Blues Imogen Banks, has ‘unearthed new voices’. There is also support for women in a range of areas funded by the Gender Matters initiative: Lizzie Cater is working in post on Picnic at Hanging Rock, Vanessa Orzlowski is in the camera department of TV Series Sisters, Charlotte McConaghy is script editor on Pulse, and Mel Sawyer was a producers’ assistant on the new Helen Mirren film Winchester.

The key issue is sustainability; gender initiatives have come and gone for decades but sustaining change requires continued actions for it – by all sectors. So it is very welcome that Screen Australia is taking the view that there is a ‘long game’ to ‘get to a point where women are equally participating in all screen art forms and creative roles’. In addition, over the last two financial years Screen Australia has reported that 47% of titles that received production funding are female-led projects.

What will success look like for Gender Matters? Screen Australia say it will be evident in that creative teams will be at least 50% female by 2018/19. Female participation (in terms of roles on the production and women in the stories) will increase. And as a government agency, Screen Australia will have indicators in place to assess projects so that gender equity targets are achieved. In my view, this will lead to increased innovation because the industry will be accessing more of its available talent (not just half of it), bringing increased diversity on screen and behind it, and creating more socially inclusive and new or varied stories. These initiatives will make the film and television industry a more attractive place for women—which in turn will make it a better and more productive industry for everyone.

Lisa French is a Professor and Dean of Media & Communication at RMIT University. She is a widely published researcher on women in the screen sector and co-chair of the UNESCO global research network on Media, Gender.  She is also a member of the Gender Matters Task Force.

Nominated for 8 WA Screen Culture Awards, this beautiful short film about belonging has a big impact.

Better Man will begin filming at Docklands Studios in early 2022 with Greatest Showman director Michael Gracey at the helm.