Run this year in the Famous Spiegeltent, Flickerfest puts a bunch of new short films before the public eye. They are always fine indicators of rising careers.
David Tiley 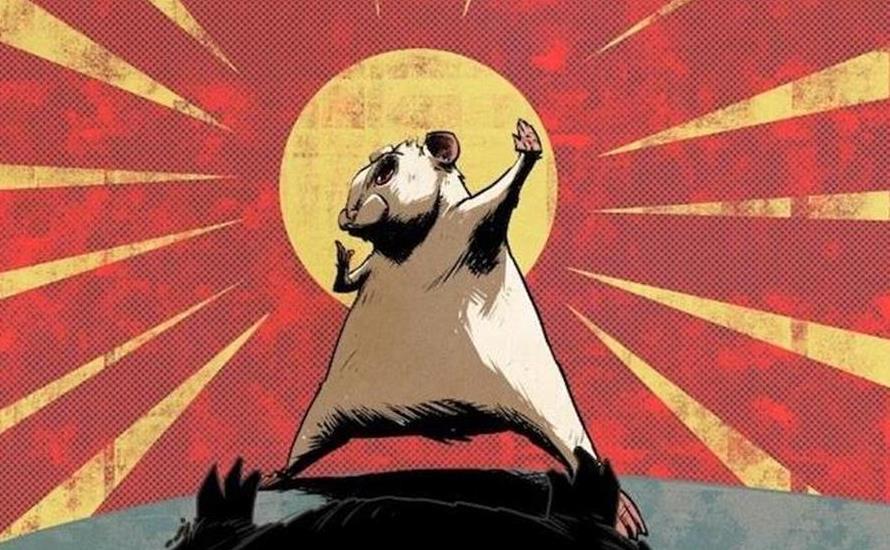 Roborovski is a hero for our times. He terrorised the Flickerfest judges into giving his film the Yoram Gross Award. Image: Ade

For its major Australian winner, Flickerfest selected a film which appeared at the 2020 Berlin Film Festival in the Generation program, which is a dazzling way to launch a film. Now it has started its Australian run, via the Flickerfest Travelling Film Festival or a competition near you.

Synopsis: In the Australian Outback, the stories of the past are reframed through a series of interwoven portraits. The Flame beautifully explores the powerful and shifting properties of fire and wind, bringing the stories of ancestors – and the upheaval that the white fella bought to the community – into the present.

According to his website, Nick Waterman is a UTS graduate whose films cover ‘ different aspects of Australian identity through his poetic storytelling and strong graphic imagery. He practices in a range of disciplines, from character driven drama to music videos mixing real experience with stylised cinematography. His previous film, After the Smoke, ran at Berlin in 2017. His work is delicious.

Synopsis: Roborovski follows an eponymous thimble sized hamster, who spends his days in Marvin’s Pet Shop, hoping to find a family. However, when he is constantly overlooked by the people and animals around him, his seething resentment and intense jealousy soon takes hold and the murderous side of little Roborovski is released.

Launched at Adelaide Film Festival last year to great delight, Roroborski is a sideways tribute to the globalised industry as rising star Tilda Cobham-Hervey and Slumdog Millionaire actor Dev Patel met around the production of Hotel Mumbai. Since then Cobham-Hervey has starred in I am Woman, while Patel continues to develop his international career. Making this film would have been an absolute hoot, helped along among others by John Collee, writer and script guru on many large productions. The images are fabulous; it is an Unreal Engine project through Spectre Studios.

Synopsis: During an Australian 1990’s summer, Jacquie celebrates graduating high school with her friends and family. But when a boy she likes breaks her trust at a party, it shatters her sense of self. As Jacquie begins her process of healing, she connects with loved ones and natures, finding the strength to move on.

Naomi Fryer was born in the Northern Rivers area who started in theatre as a performer, was active in Metro Screen. This film is her master’s project for AFTRS. She has also lived in Los Angeles, ‘where she undertook the Professional Program in Screenwriting at UCLA  where she was awarded the Nate Wilson Joie de Vivre award for her feature screenplay Love is at the Centre of Things’ according to the project website with its exemplary page on the team.

You can view the trailer on Vimeo.

AVID Award for Best Editing in an Australian Short Film
Winner: This Town Ain’t Big Enough For The Both Of Us
Edited By D.C. Fairhurst

Fairhurst is an editor, director and whose first low budget genre film Reaching Distance is handled by Bonsai. The project is a music video. He also wrote and directed this short.

AVID Award for Best Original Music in an Australian Short Film
Winner: The End, The Beginning
Music by Jorde Heys

Synopsis: In the picture-book town of Collector, a young girl and her gang of rogue environmentalists are trying to save the planet as the world goes into lockdown. The main target of the rebellion? The girl’s very own father.

Jorde Hays is a classically trained musician focused originally on the piano. ‘He recently completed a Master of Arts Screen (Screen Composition) at the Australian Film, Television and Radio School (AFTRS), developing his thesis exploring the utilisation of thematic and motivic musical elements as a means of narrative support within film.’

Synopsis: Set in the near future, a thirteen-year-old girl plays a deadly game of cat and mouse in a world where overpopulation has caused for a desperate law that forces citizens to kill their designated “Soulmate”.

Born in New Zealand, Kieren Fowler is already both an NZCS and ACS; the film comes from Bulgaria, directed by  Nik Kacevski through Smoke Taler Films. It is beautiful in the most desperately moody way.

Synopsis: A woman’s crumbling relationship bleeds into her work day.

Hnatjuk was once a lawyer and has laid down an impressive career. She was a Producer for Emmy-nominated production house Break Thru Films in New York, and was an Associate Producer on the US feature film The Light of the Moon, winner of the SXSW Audience Choice Award. Most recently, Alisha produced Katie Found’s debut feature film My First Summer. That film gained significant respect at the Adelaide Film Festival last year. She is also a writer-director, good at grabbing opportunities, inclined towards coming of age and fish out of water stories.

Synopsis: The fragile relationship between a father and daughter is tested when an unexpected call jeopardises their time together.

She is a film and television actress whose work includes the feature Cerulean Blue and the series Hungry Ghosts who describes herself as ‘an Australian film and television actress. She is represented by Aran Michael Management.’ Her latest performing work looks like a heap of fun – Love and Monsters – while she described her work in detail in FilmInk. She has a bachelor’s degree in psychology and international relations from Deakin University in Victoria.