An interview with the actor who plays the closest thing we have to an Australian superhero.
Rochelle Siemienowicz 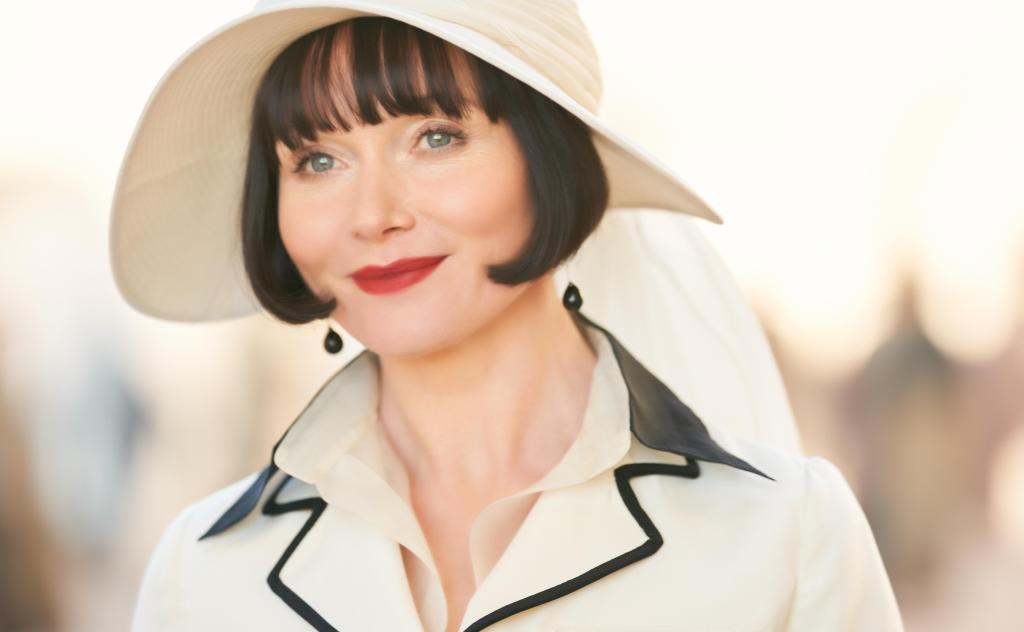 ‘She’s so vibrant and naughty.’ Essie Davis in character, Miss Fisher and the Crypt of Tears, courtesy Roadshow Films.

‘Do we need more glamour in the Australian film industry?’ Essie Davis repeats my question, before replying with a raucous laugh, ‘Well it certainly wouldn’t hurt!’

Glamour is something Davis has in abundance, even without her shiny Phryne Fisher wig and sumptuous 1920s wardrobe. We speak on a grey Melbourne morning and she is sipping a coke to stay awake. Roadshow is working her hard, cramming in back-to-back interviews for the release of this week’s much anticipated, partly fan-funded, feature film Miss Fisher and the Crypt of Tears.  Despite the tiredness, Davis says, ‘It’s very easy to step into Phryne’s shoes because she’s so vibrant and naughty, and she’s such a fresh and joyous bean of life.’

Directed by Tony Tilse, the set-up director of the TV series, the film is produced by Fiona Eagger and Deb Cox of Every Cloud Productions. They’re the company behind three seasons of the internationally best-selling TV series, Miss Fisher’s Murder Mysteries, based on Kerry Greenwood’s detective novels following the emancipated 1920s flapper sleuth with a taste for righting injustice.

The move to the big screen comes about five years after we last saw Davis playing the TV character. She says she was prepared to revisit Phryne ‘as long as she was growing and changing and moving forward.’

Scripted by Cox, and shot in 2018, the movie takes Miss Fisher out into a much wider world. We zip around from 1929 British-mandated Palestine, to country manors of London, and Bedouin encampments. Filmed in Morocco, in the desert town of Ouzarzate which homes several Hollywood backlots, and in Melbourne (standing in for London), the story reunites Phryne with her straight-laced leading man, Detective Inspector Jack Robinson (Nathan Page). Together, they investigate murders and uncover an ancient curse involving a gigantic green jewel, as well as spouting many a campy line and double entendre. At the VIP 1920s-themed dress-up screening I attended on Sunday, these scenes had the knowing audience clapping and whooping with appreciation.

‘When we opened it at Palm Springs at the beginning of the year, we had 850 people in the audience,’ Davis remembers. ‘Maybe an eighth of them were not fans and hadn’t seen it before, but the rest of them, it was like watching Cinema Paradiso. “Argh he’s behind you!” “OMG!” Awwww!” It was like being at the theatre, and every screening I’ve been to has been like that, very vocal.’

Davis, and everyone else backing the very modestly budgeted film (estimated around $8 or $9m), including Film Victoria and Screen Australia, are hoping the fans will turn out in droves on that crucial opening weekend. There’s an old style theatricality to the production, including some creaks, but the character – a sexually liberated, independent and unwaveringly upbeat woman of a certain age – has become a kind of female superhero. This is the best chance we have for a crowd-pleasing Australian feature film this year.

‘Having this kind of group experience is what we need at the moment,’ Davis says, ‘because people are getting lost and lonely on their devices in a land of social media, and not necessarily coming together. And I think it’s quite wild, this sort of big communal experience.’

The Importance of Dress-Ups

Dressing up for the screenings will be part of the fun for many viewers. The gorgeous costumes, by Marion Boyce in the TV series, were always essential to Miss Fisher’s appeal, spawning blockbusting exhibitions of their own. The movie sees costume designer Margot Wilson continue the tradition, with a little more form-fitting and a few alterations made for outdoor adventures.

‘It is fun to dress up,’ admits Davis (who is wearing a decidedly 2020 long sweeping floral frock in pink and green). ‘Phryne is always immaculate. Even if she’s been falling off a camel. Even in her dusty rock-falling, train-riding outfits she’s immaculate. And if she has to bust a political prisoner out of jail, she’ll just put on a little red satin number to do it.’

It’s a lesson that some of us in the aggressively casual Australian screen industry could learn, though Davis isn’t pointing the finger in that direction when she says: ‘When people do dress up, both men and women, it gives them confidence. Even if they don’t feel it on the inside, they project this beautiful put-together person who is taking pride in presenting themselves to the world, and that’s pretty special and important.’

Since she graduated from NIDA in 1992, Essie Davis has become one of Australia’s most acclaimed and respected film, television and theatre actors. Perhaps best known for her starring role in Jennifer Kent’s The Babadook (2011), or her turn as Lady Crane in Game of Thrones, her screen credits also include The Girl with the Pearl Earring, The Slap, Cloudstreet, Lambs of God and Baby Teeth. Most recently, we saw her playing the tough and decidedly unglamorous Ellen Kelly in Stan’s True History of the Kelly Gang, written and directed by her husband, Justin Kurzel.

Davis and Kurzel have been together for decades and have twin 13-year-old daughters. Without a particular home base, they travel where projects take them. How to make two international careers work, along with raising school-aged children, is one of the big dilemmas of our sector, and I ask Davis if she has any wisdom to offer.

‘Complicated’ is the word she uses a lot. She answers as a mother, but it’s a question equally relevant to fathers. ‘It’s very complex, but women in every industry around the world have been doing it for a long time, and it’s a personal journey. I end up taking my children with me everywhere and that can be very complicated and it can be very disruptive for their lives. But also, home is where we are all together. It’s a balance. It’s a complicated balance.’

She concedes that sometimes they just have to say no to things that aren’t going to work for the family. ‘I’m lucky that I still get offered great jobs, even after I stopped for a while. But it is a big compromise sometimes.’

Asked what makes a project worth the juggle, she says she weighs up ‘how much that character is going to cost me, and if it’s going to satisfy me and be worth what I have to spend creating it, not financially necessarily, but emotionally and in terms of my life.’

On being an Associate Producer

Credited as an associate producer on the film, Davis laughs when she’s asked what this means in practice: ‘That’s a really good question! Not enough. I get a couple of things run past me for my opinion, but it’s not a position of power, unfortunately. I’m definitely going to be a producer if we ever do it again!’

She says she does give input on the script and character and has brought much of the cast to the project, including Daniel Lapaine, who she worked with in Romeo and Juliet, and Jacqueline McKenzie, ‘who was in third year NIDA when I was in first year.’ She’s particularly pleased to have brought in Egyptian actor Kal Naga, who plays a Bedouin Sheikh. ‘I met him doing The Last Post. I love his suavity and he’s a great actor. He lives in LA but he’s kind of stateless because he’s a political activist and not allowed back into Egypt.’

As for whether she’d like to direct one day, she thinks about it sometimes. Turning 50 this year, and the veteran of many a major production, she sometimes finds herself on set these days as the most experienced member of the cast and crew. ‘You’re constantly learning, and there are things a person just can’t know on their first or second time out, so I do think I’d have something to offer in that way, if I find the right story, or get around to writing it.’

And yet, acting remains her ‘number one passion.’ ‘It really is what I feel I was born to do.’

And with that, our fourteen minutes together come to a close. Essie Davis offers the parting words of any committed Australian filmmaker: ‘Tell people to see the film in the cinema. And on opening weekend!’

Miss Fisher and the Crypt of Tears opens Thursday 27 February 2020.