A new documentary is being made about the history of the Women's Lib movement in Australia. Writer-director Catherine Dwyer brings expertise from working on the similarly themed US doco 'She's Beautiful When She's Angry', but says the Australian experience of second-wave feminism was quite unique.
Rochelle Siemienowicz
[This is archived content and may not display in the originally intended format.] 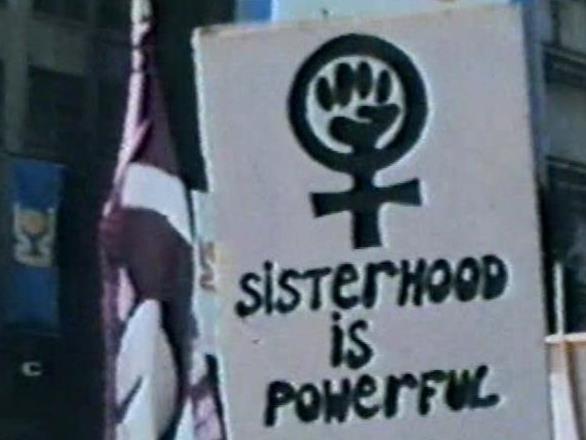 ‘You can’t make change without making trouble,’ says documentary filmmaker Catherine Dwyer about what she’s learnt from the feminist activists of the late ‘60s and early ‘70s. They were the fed-up women who changed Australian society forever, and the subject of her debut film currently in production, Brazen Hussies.

Dwyer herself looks and sounds nothing like a brazen hussy or a troublemaker. The gendered nature of profile-writing makes me want to note that she looks very young, she’s quietly spoken and perhaps a little shy, admitting over a latte on a chilly Melbourne morning that this is her first interview with a journalist.

But would we describe a male documentary filmmaker that way? That’s part of the problem.

There’s an evident determination and a confidence in Dwyer’s mission, and even some measured anger. ‘We’re discouraged from being angry or making trouble,’ she says. ‘As women we’re taught to smile and be nice and pleasant, but that’s why this film is so important – to be reminded of how change happens through ordinary people actually making trouble.’

A red-hot sizzle reel of archival footage has just been released to promote the upcoming documentary. Here’s a moment worth savouring:

‘What you’re really saying is that you men are superior in every way to all women?’ asks the interviewer in her 1970s BBC-Australian accent.

This is just one of many entertaining and instructive zingers. We also see women baring their breasts, chaining themselves to bars, marching with placards, and speaking out in parliament. Familiar feminist faces like Anne Summers and Germaine Greer appear alongside Indigenous activists like Naomi Mayers and Isabel Coe. Most intriguingly of all, a young Elizabeth Reid, the Women’s Advisor to the Whitlam government, and the first person to hold such a role in the world, speaks to the media with her child’s head resting on her shoulder. This all feels like documentary gold, and you wonder why the ABC didn’t make it years ago. These being the times we live in, a fundraising campaign is underway to finish the thing.

Produced by Philippa Campey (Bastardy, Murundak: Songs of Freedom) and Andrea Foxworthy (On Her Shoulders, Indonesia Calling: Joris Ivens in Australia), with Executive Producer Sue Maslin (The Dressmaker), Brazen Hussies is hoping to raise $100,000 to supplement an overall production budget of $950,000, contributed by agency funding, a television presale (probably the ABC) and an not-yet-secured distribution guarantee. To date, they have already raised over $31,000 from Documentary Australia Foundation sponsored donations and have received $34,000 in development investments from Screen Australia and Film Victoria.

The money raised will finance the interviewing of key figures from the women’s liberation movement. It’s a little awkward to say it out loud, but there’s an urgency to talk to them before more of them die. ‘We’ve already lost so many,’ said Dwyer, ‘and I live with constant anxiety that we’re not going to get to them in time.’

Some of the interviews have already been completed, and Dwyer herself has researched extensively and sourced the archival footage. ‘I love hunting for footage. It’s like hunting for treasure,’ she says, noting that the ABC news archives had been fantastic, but also already well-utilised and therefore familiar. Some of the most interesting rarely seen material came from more obscure sources. These included the Super 8 home movies of Melbourne film academic and feminist Barbara Creed, capturing women’s marches and the intersecting gay rights movement.

Catherine Dwyer may be a first time writer-director, but she’s no stranger to vivid and inspiring footage of women fighting for equality. She served as an editor and post-production producer on Mary Dore’s 2014 Brooklyn-made documentary about second wave feminism in the United States, She’s Beautiful When She’s Angry.  That film was a sold-out audience favourite when it screened at the Melbourne International Film Festival in 2015 and it was through those screenings, where she appeared as a Q&A guest, that Dwyer met up with Sue Maslin (at a Women in Film & Television screening of The Dressmaker) and pitched the idea of an Australian version.

‘Working on She’s Beautiful When She’s Angry was my first proper film job, my first credit as assistant editor, and it was so inspiring. It made me wonder what had happened back here in Australia at that time,’ says Dwyer. ‘I was worried it had already been done. People have definitely been trying over the years, but they were told nobody would be interested. The fact it never got made has a lot to do with how difficult it is for women to have their stories told.’

The 36-year-old Dwyer grew up in Perth, the daughter of a feminist academic, but came to Melbourne when she was 18 to do ‘a highly theoretical Bachelor of Arts at Melbourne Uni.’ She’d always been interested in cinema, storytelling and feminism, but spent some years ‘lost’ in admin and hospitality jobs before she moved to New York, where she completed an editing course and applied for an internship on She’s Beautiful When She’s Angry. Mary Dore (who spent more than 20 years getting her own film made) has become a mentor. ‘I’m going to use what I learnt on that project to do it over here with our particular story,’ Dwyer says, and is unashamedly ‘leveraging’ her film off the previous film’s proven audience potential. She’s hoping that more funding will allow her to quit her freelance editing and café jobs and focus full time on making the film.

There’s a lot more than an Aussie accent to distinguish the Australian experience of second wave feminism from the US version. Apart from kicking off a few years later, our feminist uprising coincided with a supportive government. ‘It was a very interesting time here,’ says Dwyer, ‘because unlike in the US with Richard Nixon, we actually had a Prime Minister who was taking women seriously and actually embracing the women’s movement, and he appointed a Women’s Advisor for the first time. There was a shortlist of very impressive women on it like Anne Summers and Eva Cox, but it went to Elizabeth Reid and she was very famous at the time.’

It turns out this wasn’t an enviable or easy role for Reid, yet so much got accomplished in that short time of the Whitlam government. ‘The single mother’s pension, the family law act that meant no fault divorce, and there used to be a 27 per cent luxury tax on contraceptives which Whitlam abolished in his first three days,’ said Dwyer. She notes that as a young feminist herself, before doing this research, she was quite ignorant of the movers and shakers of the time, and of the vast gains that were made so quickly.

Another fascinating aspect of the Australian experience was the intersection of feminism with Indigenous rights. It’s an integral part of the Brazen Hussies story, which credits Larissa Behrendt (After the Apology) as a consultant. ‘White women were trying to say that we are all sisters,’ says Dwyer, ‘but black women were saying, “We don’t relate to you. You want abortion rights, but we’re being sterilized against our will, and we’re having our children taken away from us. We can’t split with our brothers. Our fight is not about being women, but about being Indigenous.”’

History is so quickly forgotten, especially when it’s female. For all the social and political gains women have made, we’re still living through the #MeToo moment. ‘This is what young feminists are fighting for now,’ says Dwyer. ‘The ability to tell women’s stories and have them taken seriously. Who has the authority to speak? Who is seen as worthy of speaking and telling a story, and of being believed?’

Knowing our history, and being inspired by it, is part of that process. As Dwyer writes in her director’s statement, ‘Like the women of the second-wave who’d almost forgotten the history of the suffragettes, we need to be reminded of the legacy of this incredible era.’

Brazen Hussies sounds like one of those documentaries that needs to be made sooner rather than later. Dwyer hopes it will be ready to show the world by the second half of 2019. If you feel like supporting the project, the fundraising page at the Documentary Australia Foundation is here.