Box Office: The Dry is a great start to the year for Australian screen sector 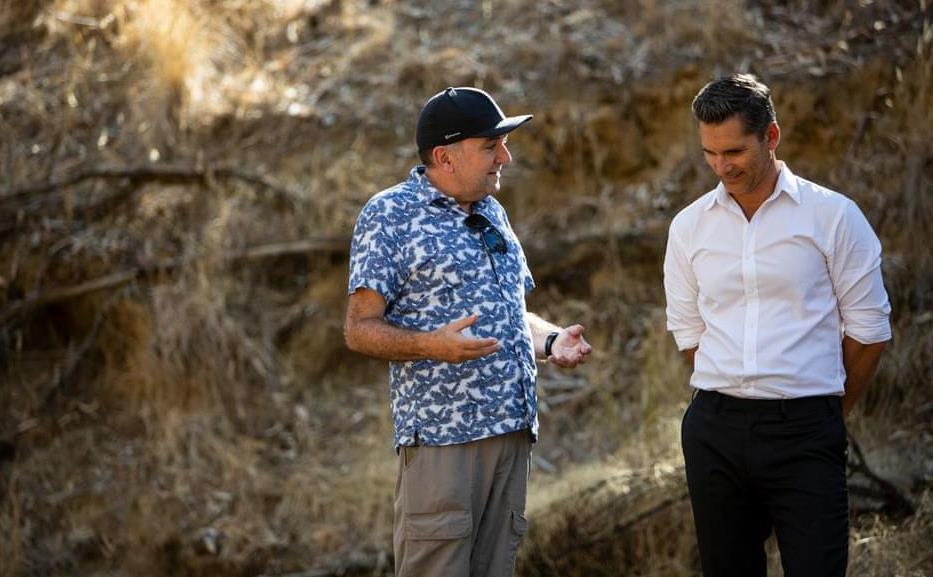 Robert Connolly and Eric Bana being casually thoughtful on the set of The Dry. Image: via Roadshow.

The Dry is a wonderfully heartening start to the year for the Australian screen sector.

In its first weekend the film took $2.61m off 421 screens in 292 cinemas. Deep in multiplex territory The Dry came up against Wonder Woman 1984, which was already in its second week. The Dry was beaten handily by around $1.5m, and pipped at the post by The Croods: A New Age. But The Dry was doing better than Wonder Woman in one useful metric – it beat Wonder Woman on a per screen basis.

Even so, The Dry added another handy metric, as its weekend box office of $2.04m just pipped Wonder Woman, putting the local drama at the top of the table.

As of Monday morning, The Dry has made $6.92m. This is an Australian film with broad mainstream appeal, which has enticed over 450,000 people to see it.

Here is a sweet comparison. While Dry took $2.61 in its first weekend, The Invisible man made $2.53m and $2.2m in its second weekend, when Dry made $2.04m, so they are running neck and neck. And both are Covid releases.

Around the world, Wonder Woman 1984 is on HBO Max, but is only at the cinema in Australia. Given that our figures reflect the US audiences pretty closely, Warner Bros can multiply that $19.07m by 15 and do the currency conversion to guesstimate that it would have made US$225m at the North American box office.

It is running in some US cinemas and has taken $42.5m since Xmas, though it is now down to $3.9m over the last weekend. It is looking pretty floppy, perhaps because the reviews are not kind.

We don’t know how Warners calculate the value of its streaming, though it doesn’t have to share income with exhibitors which is enticing. It will still have a hefty advertising bill because it is such a public and obviously brand-enhancing release. However, Warners will have the picture on wide release in the cinemas at the end of the month, for which the Australian figure will provide some guidance about the impact of streaming on the seat sales.

Rams, after 11 weeks is down at number 20, but it has taken $4.5m or 300,000 tickets. Roadshow is distributing The Dry, Rams and, on 21 January, Penguin Bloom, which probably means three strikes in a row, unheard of for an Australian slate aimed at mainstream release.

Babyteeth is still out there, after 25 weeks, now on 5 screens and a total of $481k, and also available to stream, where it is finding new fans.

Maya The Bee, the tots’ version of Fury Road, is in 238 cinemas during the daytime and has made  $188k by the end of its first week.

There are two other tentpole-ish films on Australian screens at the moment. Monster Hunter has taken $1.87m in two weeks, which is well under Dry.

The Witches has made $5.37m in five weeks. German kids’ fantasy film Dragon Rider has taken $1.30m in two weeks, while Tenet is really finished with $16.05m.

US comedy The War with Grandpa has taken $7.5m in six weeks.

Here are some exceptions. Twenty years ago, Chopper took $6.8m, adjusted for inflation. Animal Kingdom made $7m here and $10m globally. Hotel Mumbai made $3.31m in Australia but the final global result was over $27m.  The Invisible Man hit $9m here but was essentially a US release  which ultimately made $185m around the world. Can The Dry chuck a serious soeccy internationally? We shall see.

Of course Wonder Woman is doing much better than The Dry in brute terms. But then, the superhero flick cost around $260m to make, and The Dry could well make much more of its budget back on a cinema release. And investment is a percentage game.

[Update: The general box office numbers have been checked and expanded.]