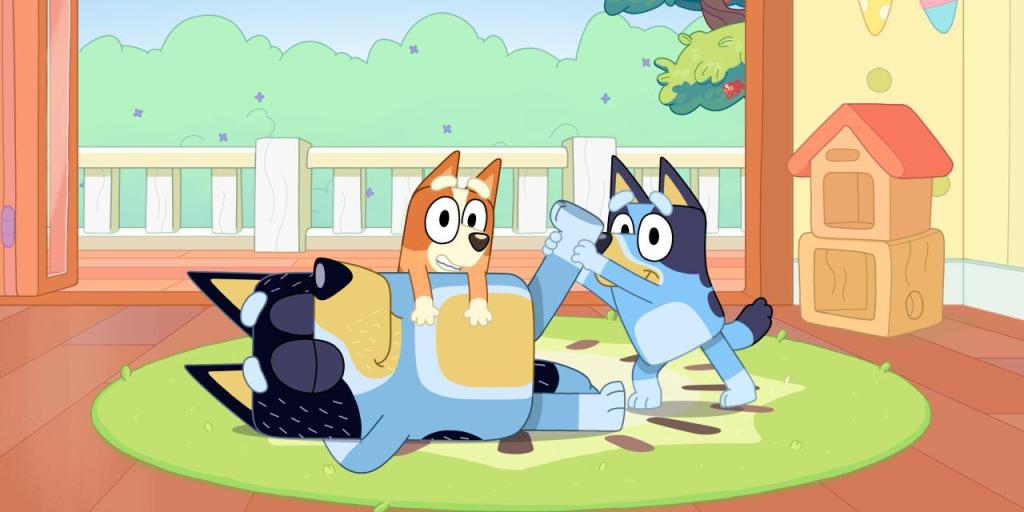 Our favourite TV shows have gotten into a habit of splitting their latest seasons into two parts – see Better Call Saul, Stranger Things, etc. Even ABC’s Bluey, the beloved children’s animation about ‘an inexhaustible six year-old Blue Heeler dog, who loves to play and turns everyday family life into extraordinary adventures’ (and balm of parents everywhere), cleft its third season in twain.

The first part of Bluey season three wrapped up on 16 December 2021, leaving fans waiting an agonising six months with nary a plucky blue heeler in sight.

Read: ‘An idealised Australian ethos’: why Bluey is an audience favourite, even for adults without kids

As of yesterday (and with replays on ABC iView), families can sit down to watch their favourite dogs and puppies go on all-new hilarious adventures.

Among the talented voice cast, you may hear the likes Myf Warhurst as Aunt Trixie, Megan Washington as teacher Calypso, Layne Beachley as a surfer, and Dan Brumm as Uncle Stripe, who have all made appearances before.

And if you don’t have kids? Who cares!? You’re going to watch it anyway, and so are we.

Check out this video of yesterday’s official launch, which included custom Bluey biscuits:

If it wasn’t already obvious how much Australians love Bluey, the ABC Classic 100 countdown affirmed that love this weekend when the joyous theme tune came in 83rd (beating Psycho, Shrek, and Toy Story).

Read: Daley Pearson, from his heart, showing the soul of Bluey

Look away now lest you read a spoiler …

Musical Statues: Monday 13 June
At the end of a long day, Bluey and her family are out of sync and out of sorts, so Mum gets everyone to play musical statues.

Stories: Tuesday 14 June
Indy thinks she’s no good because her model horse looks like a cow, but Calypso encourages her not to give up.

Puppets: Wednesday 15 June
Bluey and Bingo teach Unicorse good manners so he can ask Mum on a date, but things go sideways when Unicorse eats a tick.

Turtle Boy: Thursday 16 June
Bingo finds a toy turtle at the playground and wants to take him home, but Dad says it’s not the done thing.

Onesies: Friday 17 June
When Mum’s sister Brandy comes over for a visit, she brings the kids onesies as a present, which has an unexpected effect on Bingo.

Granny Mobile: Saturday 19 June
Muffin is playing Grouchy Granny on an old mobility scooter at a garage sale, but a real granny wants to buy it.

New episodes of Bluey will air daily at 8am and 6.30pm on ABC Kids and ABC iview.