John Brumpton's tent boxing film 'Kid Snow' will soon shoot in Kalgoorlie. Behind it is a marathon story of development and an actor/writer who refused to give up.
David Tiley 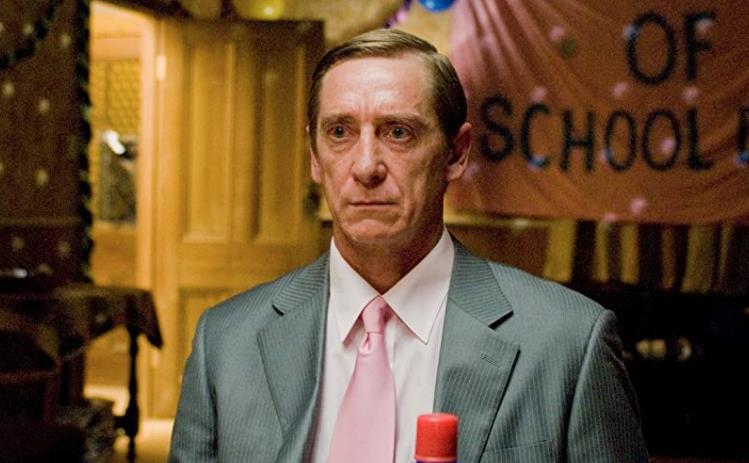 Boxer, actor and writer John Brumpton seems entirely reasonable before he gets out the battery-powered drill in The Loved Ones, one of Australia’s finest horror films. Image: IMDB

Screenwest recently  announced that a feature film called Kid Snow is shooting around Kalgoorlie this year. The synopsis, according to the media release:

‘Set in 1970’s Western Australia, a washed-up Irish boxer, Kid Snow, is offered a rematch against a man he fought 10 years prior, on a night that changed his life forever.

This drama is directed by Paul Goldman (Suburban Mayhem) and written by John Brumpton (Life), Phillip Gwynne (Australian Rules), Shane Danielsen (The Guests) and Stephen Cleary (script editor on Sweet Country). The producers are Lizzette Atkins (Looking For Grace), Megan Wynn (The Childhood of A Leader) and Bruno Charlesworth (Ladies In Black).

It’s a routine moment on what is actually a pretty extraordinary journey. In the wake of the announcement, we are going to shine a brief spotlight on some films and people whose vigour and sass was lost on mainstream cinema over the last twenty years, but who now come into focus with Kid Snow, a boxing film that will be distributed by Madman.

Once upon a time…

Once upon a time, in 1996, a group of recent graduates got together in Melbourne and made Love and Other Catastrophes. Shot on 16mm, it came to the Australian Film Commission for completion money, which was a very rare ask at that time, and perhaps the first. Ultimately it was released by Fox and confirmed the dream narrative of so many emerging filmmakers. It came from nowhere to make the big time, a hint that the Australian sector could be upended in its very own Easy Rider moment.

L-R: Matt Day, Frances O’Connor, Radha Mitchell, Matthew Dyktynski and Alice Garner in Love and Other Catastrophes, as their careers took off.

The executive producer of that film was entertainment lawyer Bruno Charlesworth, who went on to finance eight more mostly indie films, though he went mainstream with Ladies in Black directed by Bruce Beresford. He will come back into this story.

John Brumpton is the key

The key to Kid Snow is John Brumpton, a former surveyor turned Australian Kung Fu champion who also represented Australia in conventional amateur boxing in Thailand. He trained as an actor at the Victorian College of the Arts, and has been active on screen ever since, based on his concentration, physicality and interesting face.

In the mid-1990’s he surfaced as co-writer and actor in Life with writer/director Lawrence Johnston. Brumpton was also engaging with producers over a full-length feature script about tent boxing which was a way of exploring his own contradictions about combat and the search for serenity. It was a difficult time as he learnt the roles of producers and agencies and sorted out the opportunities and constraints they provided. All that was complicated by the dream of another Love and Other Catastrophes.

More than a decade ago, Melbourne producer Lizzette Atkins put the project on her slate for Circe Films as she added feature drama to her long CV in documentary.  She was a key producer on X, the low budget crime thriller by genre specialist Jon Hewitt with Belinda McClory also on the script. Add to that Looking for Grace, written and directed by Sue Brooks, and Celeste, directed by Ben Hackworth and written with Bille Brown.

Read: X: down these mean streets in ten short weeks

Asked about her interest in John Brumpton, Atkins explained to Screenhub, ‘We saw the strength in the storytelling and were enthralled by the visual poetry of the story world as well as the emotional pull of an incredible array of characters. We were not interested in a nostalgia piece – we wanted to help John develop a film that would work for contemporary audiences.’

‘We saw the strength in the storytelling and were enthralled by the visual poetry of the story world as well as the emotional pull of an incredible array of characters. We were not interested in a nostalgia piece’

And, we have to add, would be suited to more conventional financing structures.

Atkins brought Paul Goldman on board as director, and acknowledges his clear vision and role in driving the writing process over the last few years. Goldman too has a good eye for interesting projects, starting with White/Indigenous drama Australian Rules around 2003, followed by The Night We Called it a Day, about Frank Sinatra’s true dinks battle with the Australian press, which had a terrifying cast led by Dennis Hopper and Melanie Griffith.

With that experience Goldman was able to turn Emily Barclay into a horrifying underclass teenager in Suburban Mayhem, released in 2006 and written by Alice Bell as she launched into a terrific career as a television writer. The idea of a teenage mum as Satan is pretty potent.

The credits for Kid Snow reveal just how much the project evolved over the two decades that John Brumpton refused to give up. Phillip Gwynne became co-writer. He had previously worked on the script of Australian Rules with Paul Goldman.

Shane Danielsen arrived as well. He worked with Eron Sheean on his 2012 science fiction film Errors of the Human Body, another low budget feature made in a German biology laboratory as research continued around the crew.

Stephen Cleary was added to the mix. He is the wandering minstrel of story and script editing, hired by many an agency and production company to add his passion for Aristotle and the arcane logic of storytelling to films which have gone funny in the middle. His most recent credit is Sweet Country.

One of the most valuable elements in this saga is a coincidence. Lizzette Atkins grew up in rural Western Australia, has already made Looking for Grace there and considers herself very much a WA producer.

She is producing with Megan Wynne, a Perth production veteran who has been line producer on Leigh Whannell’s The Invisible Man, made in Sydney with Goalpost and Blumhouse, and co-producer on Dust Walker by Sandra Scibberas.

Presumably by coincidence Wynne was the line producer on a 2016 UK feature called My Name is Lenny about a street-brawling real-life unsanctioned boxing champion played by Australian Josh Helman. He is perhaps best know as Slit in Mad Max: Fury Road, whose best line is,’Hey heads! Say bye-bye to the neck!’

What a lot of names! And we have one more for you.

Bruno Charlesworth, executive producer of considerable patience, is moving into producing after twenty years. With Steve Kearney and Tenille Kennedy he produced Bad Girl, a genre piece by Finn Ekvist off a Kearney story, which had an excellent cast in Sara West and Samantha Weaving.

Now Charlesworth is the third part of the producing team on Kid Snow.

According to Lizzette Atkins, one reason the project was able to keep evolving was that attention to contemporary audiences which she identified at the beginning. ‘Keeping it relevant was something that helped us bring John forward with us as we continued to develop it,’ she said. ‘It is now as important today as it was in the beginning because it is really a film about masculinity.’

Australian films contain a lot of male violence and combat, but they are almost never created by people who know what that means for real. John Brumpton knows that…

Australian films contain a lot of male violence and combat, but they are almost never created by people who know what that means for real. John Brumpton knows that combat is a core part of his identity, and the film has developed as he himself has matured.

This one story reveals a trail of films which have huge value but did not touch mainstream culture, no matter how carefully they were made for an audience. The sexuality in these pictures is often intense and challenging and generally we are not comfortable with ‘edge people’ who are beyond control.

Better to stick with the genial, sexy charm of Love and Other Catastrophes.

Major production investment comes from Screen Australia, in association with Screenwest, Lotterywest and the Western Australian Screen Fund through the State Government of Western Australia’s Royalties for Regions Program. It is financed with support from Soundfirm and Film Victoria.