Hail Draconis is a key step in a ten year battle to build a feature production company from commitment, commercials and crypto-currency.
David Tiley 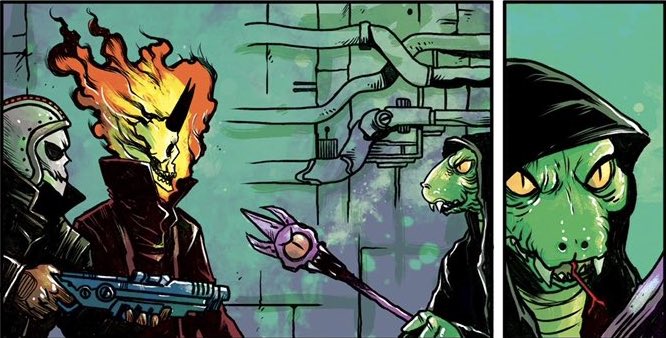 We all know that Earth’s government is run by a shadowy cabal of shapeshifting lizard people called The Grand Reptilian Council. Now production company Truce Films has made a deal to create a sponsored documentary called Hail Draconis, disguised as an animated series.

Because the Overlords are such a cheap bunch of lizards, it will be crowd-funded by us, their ultimate prey. We believe this is an ironic tribute to their skill in giving us Trump, Johnson, Morrison, Bolsonaro and Duterte at the same time. President Xi Jinping is not under their control as the Chinese Communist Party is a much tougher nut, and their secret lair in the Altai Mountains is wired to resist mind-scrambling repta-rays.

Here is a preliminary proof of concept, which is actually the finance plan.

Basically softheaded humans can buy Reptilian Coin ($RPTC) on Discord using their pitiful supplies of real money. Crowdfunding of course relies on rewards, and the benefit for us feebloids is that the Reptilians promise not to tear our heads off in some massive blood sacrifice. Instead our brains will be descrambled of all that useless wiring so we can be conditioned into the Mindless Horde fed entirely on enormous troughs seething with their half alive Aztec Guu(tm).

A phone call to producer and head of development Jim Wright revealed that Truce Films has been disguised as a growing TVC and narrative drama production company for the last ten years in the single-minded quest to make features and long form television series. The degree of accuracy is astonishing. Not only will the members blend in perfectly at Screen Forever but partner and executive producer Elise Trenorden produced All These Creatures which won the short film Palme d’Or at Cannes in 2018.

The fact that Jim Wright used financial language with such crisp authority suggests that banking was probably invented by a previous invasion of the Overlords, known in the Bible as Babylonians.

Like many feebloids, we were sceptical at first. But it turns out that Reptilian Coin ($RPTC) is very similar to Dogecoin, also allegedly launched as a joke. It is being used to fund the Elon Musk SpaceX satellite around the moon in 2022. RPTC is run by Uniswap, described as ‘a set of computer programs that run on the Ethereum blockchain and allow for decentralized token swaps.’

Ultimately this whole project was triggered by the development of a new cryptocurrency, possibly in Canada, by a group which Wright mysteriously called ‘the guys that created that’, with that being RPTC, based on a number of true facts disguised as conspiracy theories. They claim to be ‘making fun’ of it, but that is obviously a smokescreen.

The guys seem to number four, who are present in the story as the four overlords. As Wright explained, ‘The guys each inhabited a character and started interacting with the market [through Discord] who became the audience. As they interacted with the overlords, the world started to grow and the whole story arc and worlds and characters came out of that interactive by-play with the early audience.

‘You don’t have to buy the currency to interact, and the audience actually has a range of interests. Many are interested in investing in cryptocurrency itself as a way of both supporting the development of the show, but also as a way of potentially earning money.

‘This is the real genius behind the whole show in that the structure of it is almost like crowdfunding on steroids. The people who are invested in the show are literally invested in the show, so if the show does well the coin does well and the value of their stake will increase. At the same time, they are creatively part of the show, and they are very vocal in spreading the word.’

When money is art

Older feebloids might understand this evil plan better if we think of the currency as shares. Audiences/investors pay real money for the production and are given shares in return, which they can trade in the market place, where the value may go up because of the popularity of the production. However, these shares are not shares in the company, but something which was done up on the office photocopier and is inexplicably valuable in the marketplace.

People who argue that this is either a ponzi scheme or just a crazy inflation machine have inexplicably disappeared.

But Truce Films is not fiscally linked with this concoction at all, and has existence in the ‘real world’. Mind you, Wright is also talking about Non-Fungible tokens, or NFTs, which is a way of turning digital works into unique art pieces to be traded as investments, an idea which is being pushed hard by a lot of otherwise sane owners of spare capital.

They are about to release episode two of their digital comic with the same title, also available as an NFT.

Michael Ciccone, Nicholas Clifford and Charlie Sarroff started the company a decade ago, and kicked off with We’ve All Been There, which won Tropfest in 2013. Jim Wright joined the ownership structure in 2015, while Elise Trenorden signed up in 2019.

Together in a cave of dreams

‘I think it works for us because we are a team and we’re a family’ said Wright. ‘We work for each other. And we have a philosophy that we’re all driving towards the same goal and we’ve all sacrificed a lot to get where we are. We say no to alternative opportunities, and have good conversations and find a balance for everyone. And we make sure everyone has the creative outlets they are seeking and everyone is supported. It’s incredibly challenging – and also incredibly rewarding.’

They are able to keep two people full time on the development of narrative film and TV shows. Charlie Sarroff has the loosest connection, as a cinematographer working between Melbourne and Los Angeles. Clifford and Sarroff went to school together, Ciccone and Wright went to the VCA Masters in Producing program with Gus Howard.

Their projects include David Hansen’s Slingshot, which won Best Australian Short at Flickerfest in 2016, the fifty minute documentary Watan by James L Brown and Bill Irving, finished in 2018, about Syrian refugees in Jordan, and Voyeurs, a low budget feature made in the US through Truce Films.

As Wright said, ‘We are not dependent on the support of funding bodies – obviously we appreciate the support and we have been funded on this and other projects. But we have a business with infrastructure, with staff who can help develop applications and materials.’

All that and they carry unbearable secrets about the inner structure of the universe.

The Reptilian Overlords do not understand the concept of individual identity and can’t tell us humans apart, which may be the hidden weakness by which we can destroy them. Executive producer Elise Trenordan had to smuggle this paragraph out of the Collingwood bunker to honour their international crew.

We’ve been really fortunate to have some amazing creative partners and voice artists based in the US who have helped us bring this to life, including Production partner Michael Sinterniklaas, who’s voice direction and post-production work for animation have been nominated for multiple Academy Awards and Golden Globes, and Niv Toar and Gabriel Mann who are the incredible composers behind Modern Family and numerous other US TV shows. We’re also super excited to be working with Melbourne animator Cam Gough at Dirty Puppet (Aunty Donna).’

Micca Delaney is the co-creator, Nicholas Clifford is the writer and director, while the producers are Emma Roberts, Elise Trenorden, Jim Wright, Michael Sinterniklaas, according to the official records of Screen Australia’s Generate Program.

The crew is having a lot of fun on Twitter.