Cult of the Lamb: a look behind the scenes with Melbourne’s Massive Monster 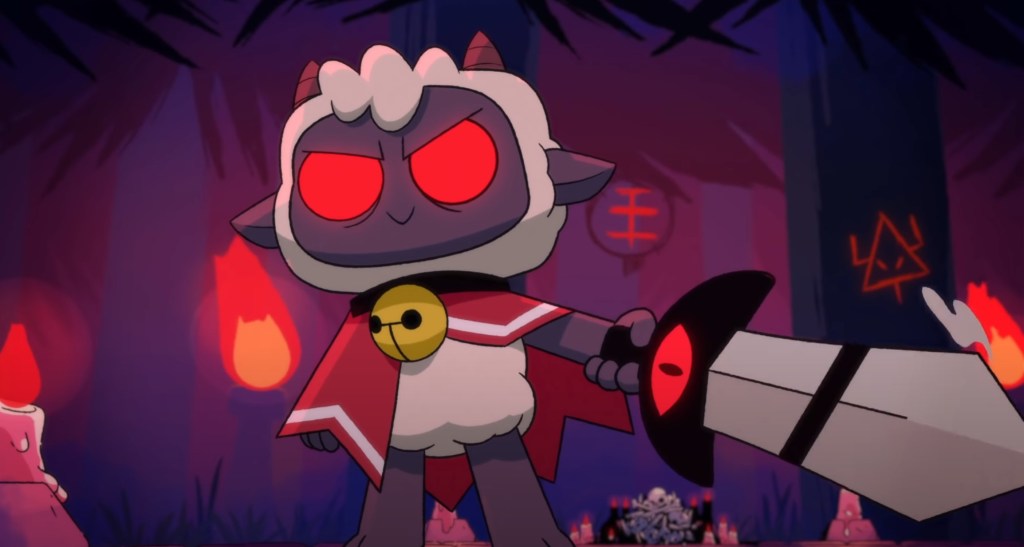 Cult of the Lamb is already its own beast. Just announced as part of Devolver Digital’s Gamescom showcase, the latest from Melbourne studio Massive Monster is a deliciously dark title that blends and exceeds genres. Taking reference from base builders, colony sims, dungeon crawlers, and narrative games, Cult of the Lamb arrives as lighthearted, folk horror title that looks dangerously like the next indie cult hit.

The cell animated trailer reveals that you play as a sacrificial lamb who is saved from death on the altar by a mysterious stranger, and must build a cult for that stranger to repay their debt. From here, the not-so-innocent lamb rambles through procedurally generated woodlands collecting followers and resources for their flourishing cult, quashing monsters and rival cults as they go.

The game promises a dark, fantastic romp through cult-ridden woodlands on your morally dubious mission to please the dark gods. It’s a tonal shift for the team: after spending a couple of years developing Adventure Pals, a whimsical platformer about imagination and friendship, Massive Monster was ready to shed the candy-bright colours for something edgier. The lamb they’ve unearthed is more than ready to subvert expectations.

GETTING DARK AFTER ADVENTURE PALS

In terms of art style, Cult of the Lamb has clear predecessors: not just Binding of Isaac, but Don’t Starve and even Hollow Knight immediately come to mind. But the influences go deeper than that: Wilton cites folk horror as a guiding genre, ranging from American Gothic Cartoon Network series Over The Garden Wall to Ari Aster’s Midsommar.

Framing the sacrificial lamb – that classic symbol of innocence – as a dark overlord is a playful genre subversion that recalls the transgressive thrill of The Binding of Isaac. ‘There’s this juxtaposition that’s compelling, right, where you start out really weak, and suddenly through this unexpected help, you become all-powerful,’ Creative Director Julian Wilton muses.

Director of Design Jay Armstrong adds, ‘I think like there’s a little bit in all of us that kind of wonders what it would be like to kind of become so powerful, and would we make the right decisions? In the game, you can sort of experiment… I mean, in real life you probably wouldn’t sacrifice animals to the dark gods. I mean, I personally probably wouldn’t. But it’s fun to play in a space that appeals to that darker side.’

READ: You should play… Hollow Knight

The game balances a playful storyline with a world that is largely procedurally generated: each trip to the dark depths of the woodlands supplies a new environment full of new spooky enemies, and the cultists you enlist each have unique, generated personalities which affect their behaviour and motives. As a result, the world of Cult of the Lamb is both carefully crafted and luxuriously sprawling, with the story unfolding at a different pace for each player.

In terms of gameplay, the game’s influences get even more interesting. Rather than citing horror games, or even action games, Armstrong defers religiously (no pun intended) to the classic sci-fi colony-sim Rimworld as his gameplay inspiration.

This profound colony-sim inspiration means that home in the cult isn’t all sunshine and roses either – it takes a particular skill to manage the unique personalities of this growing band of eclectic enlistees.

IT’S THE FOLLOWERS YOU MAKE ALONG THE WAY

Despite its fixed overworld and carefully plotted story beats, Armstrong says the game gets its life from an unexpected source: the randomly generated cast of cultists you meet, befriend, brainwash, sacrifice (and sometimes eat!) along the way. ‘The followers themselves are all randomised: they have randomised names, they are different randomised animals, and they’ll have randomised traits as well.’

At the outset, the team hadn’t expected that the followers would play such a significant role in the core gameplay – but Wilton found himself unexpectedly enamoured of his motley crew of followers in early testing: ‘it was interesting to realise that I just really wanted to look after my boys!’ he laughed.

This characterful, offbeat community dynamic has ended up being as game’s standout feature – though the team’s original plan was to make a more straightforward dungeon crawler.

‘They’re all just around all the time – it’s kind of like having 10 Tamagotchis at once, and you’re just there trying to solve problems for them.

‘I think that’s kind of where the strength of the game has been, even though originally we were trying to make a base-building game with a bit of dungeon crawling – but really, the glue has been these followers.’

This combination of dungeon crawling, base building, community simulation and spooky narrative promises a fascinating gameplay experience. While the influences come thick and fast, it doesn’t have a direct genre precedent.

Genre innovation comes with some obstacles. Where a typical game with colony sim mechanics, like Oxygen Not Included or Rimworld, can relay complex stats and law through static screens, Wilton neatly sums up the hurdle that the Cult of the Lamb team faced: ‘when you have a character who can swing a sword, you really don’t want to read anything!’

Instead, Cult of the Lamb will rely on characterful animations and the emergent storytelling that comes from the interplay between its procedural generated cast to give the dark world of the game life, as the broader narrative unfolds at a different speed for each player.

It’s a balance that the devs have had to fine-tune; Armstrong describes organising multiple midnight calls on the cusp of a milestone to rejig a feature or rethink a beat – it’s been particularly complex to convey the depth of a colony sim in a game with action mechanics.

But the team knows they are onto something special when the emergent narratives of the game genuinely surprise them, which it does with increasing frequency. Armstrong wryly tells a story about community management gone horribly wrong – or perhaps ghoulishly right?

‘I was playing the other day, all of my followers died kind of at the same time – they all got sick and they all died. And when followers die, you can actually, chop them up and put them in the cooking pot to kind of make stew out of them – you don’t have to, but you can. So I chopped them up and prepared all these meals, and then I went out and got a whole bunch more followers who came back, had no idea that they were living in this horrible graveyard, and started happily eating food – they had no idea of the horrors that had just occurred! So it’s great to get stories like that.’

Cult of the Lamb might experiment with game genres, but as far as folk horror goes, this emergent narrative hits the genre right on the head. When I joke that Armstrong seems a little less protective of ‘his boys’ than Wilton is, the creative director interjects to defend his creative colleague: ‘In the context of the cult, there are followers who might be happy to make that sacrifice! Some of them just want to do it for the cause. So that makes me feel a little better – and you know, sometimes you get naughty boys! So,’ he pauses, ‘you know, you have a way you can get rid of them.’

This is exactly the kind of darkness I can get behind.