Music is a truly international language and Antonio Gambale is good at travelling on the wings of song through some fabulous cultures.
David Tiley 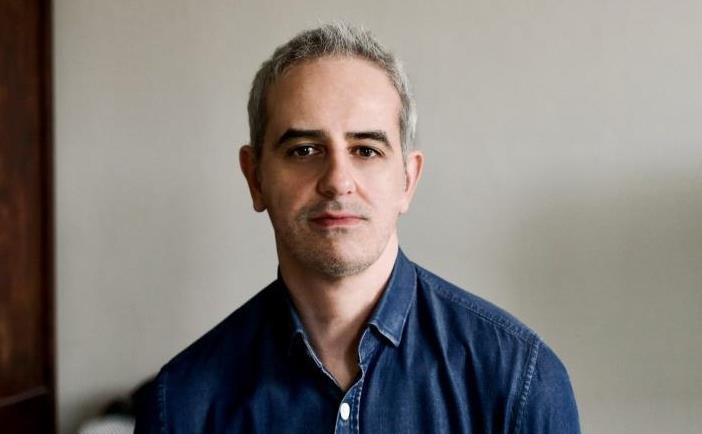 Antonio Gambale in a pensive mood, somewhere in Europe. Image: Level and Gain.

Tucked into the Big Cheese nominations for the Emmys is the name of Antonio Gambale, competing in two Emmy categories: Outstanding Main Title Theme Music, and Outstanding Music Composition for a Limited Series. He is an Australian musician and composer from a migrant family, working internationally out of Paris.

The project is the series Unorthodox, set in the Hasidic Jewish community, given a lot of freedom and a modest budget by Netflix who anticipated niche success. It has done much better than that.

The music for Unorthodox is available on Gambale’s website which also contains the music for Australian film Joe Cinque’s Consolation.

‘I certainly learnt a lot,’ Gambale says on the phone. ‘There was a really painstaking attention to detail and care in portraying that community. One of the main goals of the show was to never use the lazy stereotypes of cliches so all the characters had a real human dimension to them.

‘A bunch of composers were asked to put their hat in the ring for the show. One of the first things they said was, “We do not want anything that’s trying to simulate notions of Jewish music.”‘

There are three musical dimensions, from Klezmer to classical and modern electronic techno in Berlin. They worked with character themes with a specific palette of instruments, often used outside their usual context.

‘One of the first things they said was, “We do not want anything that’s trying to simulate notions of Jewish music.’”

‘In terms of the music, we had a consultant who’s from that community, like a cultural consultant, who is actually one of the actors in the show. He was really on top of that, and then the co-creators of the show are Anna Winger and Alexa Karolinski, who are Jewish from Berlin.’ But they too needed to work across cultural barriers, because their experience of Jewishness is far from the tight, isolated, Hasidic world. Both accuracy and empathy were vital.

Read: Australians shine in Emmy nominations from tears to laughter

The story is mostly about women. ‘I have to concede, even when we were working on it, the producers were talking about things they were really noticing, that were really feminine,’ he says. ‘It’s not that you need to be a woman to get it but as a man I don’t get it in the same way. I thought, well good. For once I’m not the main target for it. Why should it be? It’s not about me.’

Giving space to the minimal

Because Netflix saw them as a boutique product, they were allowed to define their musical approach according to a particular aesthetic.

As Gambale says, ‘We could be really sparing with music because there’s a trend in film and TV that audiences get bored if the shows get too quiet. So even in some of my favourite shows, there’s just too much music in them, they score everything. because these productions have so much money put in them, everyone’s got too much of an eye on them. And they’re scared they are going to lose people’s attention so they leave loads and loads of music in dialogue scenes that just don’t need them.

‘They trusted us so we got to use music strategically and carefully in scenes where needed. So that changes the aspects of narrative that you bring with music because you’re not scoring every dialogue scene and tracking emotions in scenes all the time.

‘even in some of my favorite shows, there’s just too much music in them, they score everything.’

‘We were just scoring really key moments and it was all about the characters. The music did develop in the narrative because we had themes for the characters which would go up a notch as the story progressed.’

There was a fair amount of confusion because the production did not use temp music, so Gambale was writing to the cut while the shoot was going on between Berlin and New York. He felt as if he was really on his own, with a background fear that he was drifting off the agreed aesthetic. What is more, the editing team had always worked with temporary music to give them structure, so they were disconcerted by the freedom which Gambale found liberating.

The family arrives in Australia

Antonio Gambale’s mother was the youngest child in a large extended family who followed most of her kin to Australia. Meanwhile, his father was starting a career as a research biologist in Italy. He was inspired to become a second Attenborough working in Africa, a prospect which alarmed his family so much they persuaded him to visit his brother in Australia. He loved the place, got a job at the CSIRO, and settled in Canberra. The two met, got married and carried each other into a huge musical family.

Everyone played accordions at parties, and young Antonio learnt the piano, absorbed the theory, got bored and worked after school with his brother who was an audio engineer in a small production house. So Antonio ingested his gateway drug by writing small pieces of production music, though he was always enchanted by the medium.

He did a conventional degree in philosophy, French linguistics and literature, and used his dual citizenship to study for a while in Italy. After he graduated his side hustle with screen music became his main gig. Eventually he started at AFTRS, but won awards at the Australian Guild of Screen Composers for short films and documentaries.

The Guild suggested him for the inaugural year in the AFTRS screen composition program, and the rest is history.

Taking off for Paris

A French friend working in Paris suggested him as a composer, so he shifted to Europe. He worked his way up along with his network of friends until he was recruited to work on a Malcolm Mclaren project.

‘I had a bit of a side career doing a lot of electronic music and re mixing and working with DJs in the Golden Age, when that kind of music was still good. So Malcolm thought I could be good because I speak English and I have a lot of patience.

‘I’ve worked with a lot of DJs who don’t necessarily know how to make music, and the production and editing side is very different. It can be very boring and you have to be able to focus on one idea over and over and develop it into something.

‘And so I thought, “Well, Malcolm is pretty well known for not having the greatest attention span. So I thought that I would be suited to that.”’

The production stopped when the mercurial McLaren moved on, but Gambale had an identity in both Paris and London. He started to work with composer Nathaniel Mechaly, because he could fuse electronic music with the French cellist’s classical training. Through that door he worked on Hollywood productions, starting with the first Taken film in 2008.

The philosophy of breaking out

Since then he has worked on Columbiana, Taken 2, Beauty and the Beast, Taxi Brooklyn, Transporter the series and Midnight Sun, in a variety of musical roles. From Paris he can work anywhere because the modern sound equipment is a lot smaller than a truck and special air conditioners. It sounds like a very pleasant lifestyle, weaving through his gang of friends across art music Europa.

On his way he discovered that he is not the only successful muso in his extended accordion-playing family. His cousin, Frank Gambale is an Australian jazz fusion guitarist known for his power playing, often with the Chick Corea Electrik Band, ran a jazz school in Los Angeles and shared in two Grammy nominations.

‘He once told me, “There’s no shortage of talent in the world. Don’t kid yourself you are especially talented or better than anyone else.

“Really, the only thing you can do with it is to always be working on it and getting better at it. There’s going to be times when if you don’t get into the circles where people meet or things happen, you won’t work even if you are the most talented musician in the world.

“If you aren’t staying on the edge and at the top of your game for when the opportunities do happen, you are doing yourself a disservice.”’

That makes sense to Antonio. ‘I’ve got lots of friends and people that interest me who I am secretly jealous of because I hear the things they do. And I think I could never do something that great. But on the other hand, people introduce you to new things, and it’s always good to have your eyes open to other things. You know what I mean?’

There is an extended interview with Gambale in Level and Gain which explores the work on Unorthodox in detail.