The showrunner life is made up of early starts, late nights, and not a lot of free time. But it's worth it, says Paddy MacRae.
Silvi Vann-Wall 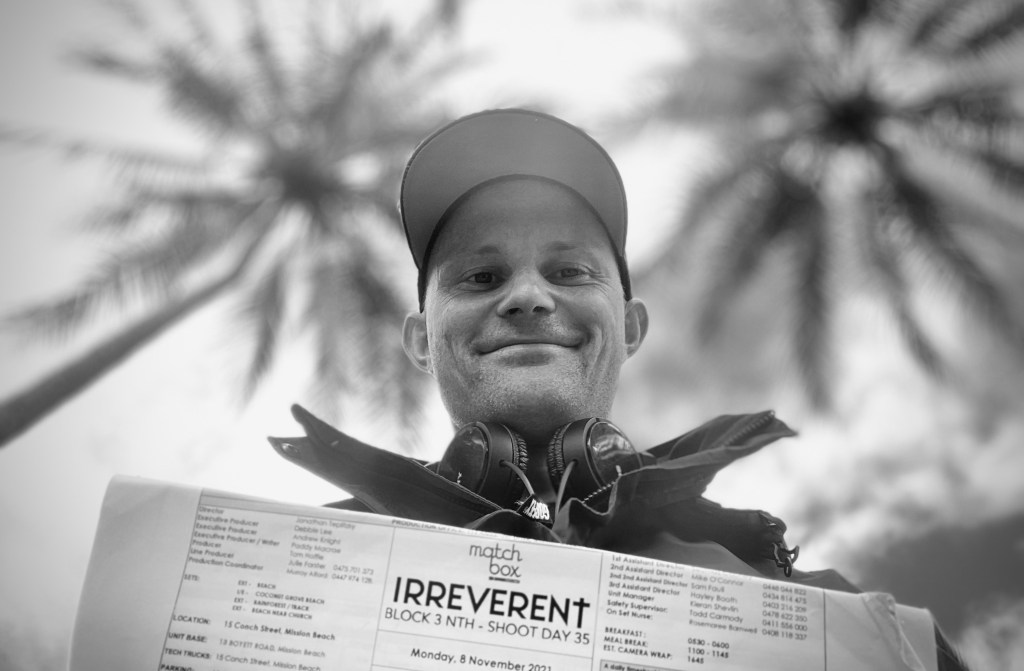 Paddy MacRae is a screenwriter, producer and showrunner. He has held multiple roles in scripted development at Matchbox Pictures since 2015 (The Slap, Clickbait, Stateless) and has worked across projects including Barracuda, Glitch, Nowhere Boys, Seven Types of Ambiguity and all three seasons of Wanted for Channel Seven & Netflix.

He is currently completing production on his first original series, the 10 x one-hour drama Irreverent, for Netflix and NBC Peacock as EP, writer & creator.

Here, he discusses how he got into the industry and why he’s confident he’ll stay.

Hi Paddy. Can you tell us a bit about who you are and what you do?

I’m a writer by trade, but for most of my career that has meant working inside a production company called Matchbox Pictures in scripted development, which is the part that comes before a TV show or film is actually shot. I come up with the ideas or source them from other creatives, and then work with writers and producers to get TV show concepts ready to pitch to a network.

When they’re funded, I work with the teams to make sure the scripts are as good as they can be before the producer goes off and actually makes the show. More recently though I’ve been making my own series as an Executive Producer and Showrunner.

What does doing your job involve?

A showrunner is the person who looks after the creative vision for a TV series across all departments, and makes sure things stay on track, from writing the scripts right through to delivering all the episodes to the network at the end of post-production.

I created a TV show called Irreverent which will be on Netflix ANZ and Peacock in the USA. That means working with a team of writers to get the scripts ready, then overseeing production from the creative side to make sure everything adheres to the central vision for the show.

I also worked with the producers, the directors, the actors, the heads of department, the studio and the networks to make sure we were all making the same show, and that it was up to the highest standard.

In practice, that means very early starts, late nights, and not a lot of free time when you’re shooting for months and months. But that’s also the upside – spending lots of time on set (in our case, in a tropical paradise) with incredible people. Oh, and there’s free food!

Screen stories have always held enormous power over me. I grew up in a household without a TV, so when I did see a TV, I was spellbound. I did drama in high school, and got into writing and directing when I went to film school. Later I specialised in writing with a Masters, and got my first full-time industry job as an assistant to Tony Ayres, one of Australia’s most successful and prolific EPs (executive producers).

Working with Tony was a masterclass in the kind of juggling it takes to manage a production and stay creatively inspired, so I went from being a PA to various roles in development at Matchbox Pictures, working across a large slate of dramas – writing, editing, pitching and managing budgets and schedules. So by the time I got the chance to pitch my own show, I had a broad skillset and the knowledge of company life enough to work with my colleagues and deliver my own show.

What piece of advice or philosophy has held you in good stead throughout your career?

Protect what’s important, look after people, and don’t spend too much energy worrying about the rest. The truth is I’m a massive worrier and overthinker, which is something I have to manage.

TV is a team sport and there is an absolute mountain of things you can’t control. It’s so easy to lose sleep over them, and to be honest I do. But I try whenever I can to step back from the chaos of life in the arts and ask myself: ‘what are the essential elements of what I’m working on, and how do I best protect and nurture those without getting caught up in the whirlwind?’ Cool heads prevail!

Start in a junior role, and do that really well. I’m pretty sure I got the opportunities I did because I made a killer cup of tea, always made sure the milk was in the fridge, ink was in the printer and the flights were headed to the right airports. Then, later, that the schedule was correct, then that the slate had good projects on it, then that my show was good.

If you do the small things well, people will trust you with the bigger ones. Show up on time, respect everyone by default and remember that it’s a privilege to tell stories.